There's more to the Hayabusa story

After posting my brief "Hooray for Hayabusa" note on Thursday I got an email from the Japanese blogger "5thstar," telling me that there was more to Hayabusa's story and pointing me to his translation to English of a lengthier Hayabusa update written by "an employee at an astro magazine in Japan." It's been a long time since I've heard from 5thstar, but it was welcome; he provided an invaluable service to English speakers during Hayabusa's dramatic encounter with Itokawa, translating to English the online writings of Japanese space journalists and thus opening up the mission to a far broader audience.

For three-axis control, you need to be able to control the spacecraft's spin around three perpendicular axes. Pilots (or anyone who's ever tried a flight simulator) will recognize the terms pitch, yaw, and roll. Hayabusa's one remaining reaction wheel can control the spacecraft's yaw. The ion engines are gimbaled, and could be used to control yaw and pitch. There's two directions there, but one is redundant with the remaining reaction wheel. So that leaves the roll direction uncontrolled. How the heck did the Hayabusa team reestablish three-axis control then?

Any guesses? Hint: longtime supporters of The Planetary Society will be happy to see yet another application of this principle!

The answer: the Hayabusa team is using photon pressure off of slightly tilted solar panels to control the roll axis. In other words, they're doing attitude control by solar sailing. And they're not just doing it as a neat trick to save fuel; solar sailing is what's enabling them to bring the plucky spacecraft back home, because without it, they wouldn't be able to control their spacecraft. 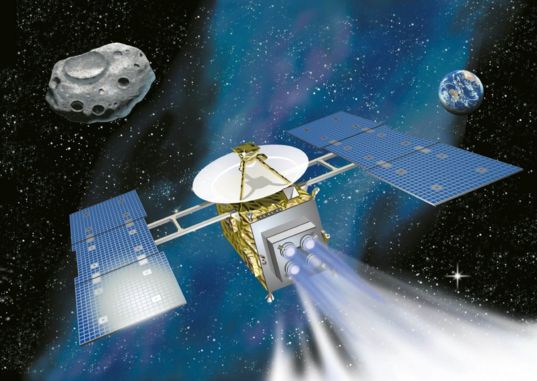