According to JAXA (the Japanese space agency), poor little Hayabusa has successfully restarted its ion engine and has resumed powered flight today. Hooray! This is good news for Hayabusa's eventual return to Earth.

The Japanese version of the announcement seems to contain more information (the link takes you to a Google-translated version). Before the engine was restarted, three-axis stabilization was reestablished; this is in contrast to spin stabilization, which is a simpler mode but which is no good for powered flight. Also good news! 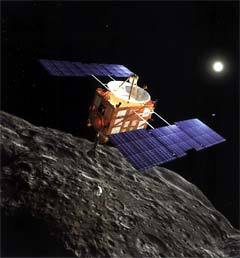