At last, it’s here! The autumn equinox issue of The Planetary Report is in the mail. I apologize for its lateness and I thank you for your patience. I think you’ll find the end result to be worth the wait.

For our Members who choose to receive their magazine electronically, you can pick it up here.

Giant polygonal features have been visible on the surface of Mars since the 1970s—they were first seen in images returned by the Mariner 9 and Viking orbiters. These features are common in Mars’ northern lowlands—where its ancient oceans likely would have been. The polygons origins, however, have continued to mystify scientists. Here, Dorothy Oehler details the processes that may have led to their formation and she compares them to similar, smaller, polygons on Earth.

It’s not just passion and money that fuel space exploration. How about radioactive decay? Plutonium-238 (Pu-238) has powered nearly 30 deep-space missions in NASA’s history. But in 1988, the United States stopped production, and remaining supplies are nearly gone. In “Power from the Isotopes,” Casey Dreier explains why the U.S. stopped making Pu-238, why we have a shortage, what is being done about it, and what had to happen to restart Pu-238 production in this country.

In addition, Bruce Betts describes upgrades to our search for new planets and ET, we gain some insight into Ganymede’s underground ocean, and Bill Nye gives us a tasty lesson on how cooling lava cracks—with cookies!

The Planetary Society exists and does great work because of you. We aim to change the world. If you are not yet a Member and would like to be a part of our team, just go here to buy a year’s membership. To thank you, we’ll give you four issues of The Planetary Report, a magazine in a class by itself. 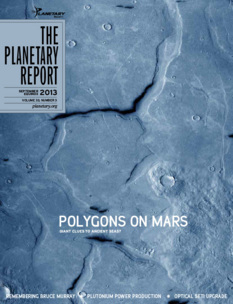