Yesterday, I attended the MEPAG (Mars Exploration Program Analysis Group) meeting in Monrovia, California. MEPAG is “NASA's community-based forum designed to provide science input for planning and prioritizing Mars future exploration activities for the next several decades.” So, bunches of Mars scientists mixed with some engineers and managers get together to provide input to the future of the Mars program.

Considering the Mars program budget has been seriously cut, the recommendations seem even more important and challenging. But, there was lots of good news of current and future missions, as well as inputs for the future. 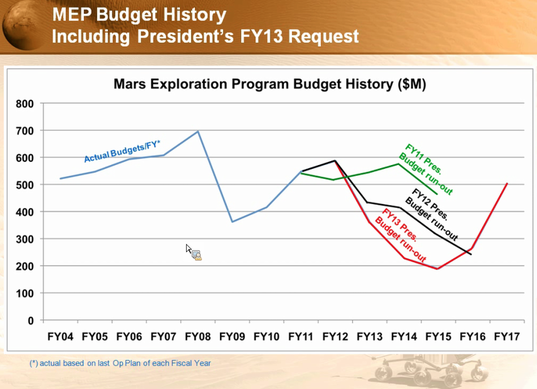 After an introduction from MEPAG Chair Dave Des Marais, things got serious, and acronym heavy. A big presentation and report for the day was Orlando Figueroa presenting the report of the MPPG (Mars Program Planning Group). This same report was made available a couple weeks ago by NASA, but here it was being presented directly to the Mars community (which, to be clear, is not people who live on Mars behind gates with a guard house). The MPPG was put together in light of Mars budgets getting cut, and the President’s administration/NASA wanting to coordinate robotic and future human exploration of Mars. As requested, the MPPG provided a set of options for the Mars program in the next years and decades, and associated analyses. You can find the 66 page Powerpoint as well as some presentations from other speakers here.

Doug McCuistion, head of NASA’s Mars program, and Michael Meyer, its lead scientist, discussed next steps for Mars program planning. The key immediate concern is the 2018 launch opportunity, and what, if anything does NASA fly during that launch opportunity. Recall there are good launch opportunities to Mars every 26 months, and some are better than others. 2018 is particularly good, but the current administration budgets don’t support much, if anything, during that launch opportunity. The HQ Mars program, led by McCuistion, has taken input from the MPPG and crafted a recommendation which has, as I understand it, already gone to SMD (Science Mission Directorate of NASA) and from there will move up the chain. But, here is the catch: since the recommendation would be part of the President’s FY 2014 budget, all that information is embargoed/secret until the President’s budget is released in February. In the mean time, Meyer will be gathering SDTs (Science Definition Teams) for three different permutations of missions for 2018 or beyond: a Curiosity based rover, MRO type orbiter, and small orbiters focused mostly on telecommunications relay from the surface. The goal is for NASA to be ready to issue an AO (Announcement of Opportunity) as soon as they can for whatever the President’s budget and budgetary direction support. Because in the planetary exploration business, oddly, 2018 is just around the corner.

As you can already tell, it was acronym heaven at MEPAG, and one of the best in my amused opinion was the MEPAG P-SAG (Precursor Strategy Analysis Group), which did a report that was sponsored jointly by MEPAG and SBAG (Small Bodies Analysis Group) :). Dave Beaty presented their report “Analysis of Strategic Knowledge Gaps (SKG’s) Associated with Potential Human Missions to the Martian System” which led to a flurry of tables and charts involving SKGs and GFA’s (Gap Filling Activities). Basically, many experts looked into what things needed to be done to get us closer to being able to safely fly human missions to Mars, which are considered 20 years off (just as they have been for my entire life – sorry for the pessimistic diversion). You can find their report and many more here.

In Jorge Vago’s update on the ESA Mars program, ExoMars continues on, now with Russian partners after the U.S. backed out (though significant U. S. scientific and other contributions remain, but at much smaller overall levels). 2016 is to have a Trace Gas Orbiter to study, oddly enough, trace gases, like methane in the Mars atmosphere and a very small, short lived lander to demonstrate Entry, Descent and Landing. The 2018 piece of ExoMars will be a 300 kg rover with a drill that is now to be landed by the Russians. The Russian platform on which the rover will rest will also have Russian instruments. Random Space Fact: the platform has legs to cushion the shock of landing for the rover because the rover was designed for the original plan which was to use a U.S. sky crane to gently set the rover down like was done with Curiosity.

Mike Wargo from NASA, with the cool title Chief Exploration Scientist, remotely presented a report on the Human Exploration program. Apparently, there were SKG analyses by MEPAG, SBAG, and LEAG (Lunar Exploration Analysis group), which will be integrated, particularly to look for common ground on which to base JRPA activities between HEO and SMD on which they just signed a MOA (respectively, Joint Robotic Precursor Activities, Human Exploration Office, Science Mission Directorate, and Memorandum of Agreement). They are also working SKG’s with international agencies with the Strategic Knowledge Gap Assessment Team, yes, that’s right, SKGAT, chaired by Wargo.

There was a MEPAG goals update from scientist Vicky Hamilton. You can find their complete 48 page goals and objectives document here. It is structured under four overarching goals, summarized as Life, Climate, Geology and Geophysics, and Preparation for Human Exploration.

Then, we got to hear updates about the next two missions to Mars from the U.S., both wisely headed by people named Bruce. Bruce Jakosky briefed us that MAVEN is on track for its November 2013 launch. MAVEN is an orbiter that will study the upper atmosphere and exosphere of Mars to understand the escape of Mars’ atmosphere over the last gazillion years. Bruce Banerdt discussed the details of the recently selected InSight mission, the first geophysics mission to Mars. InSight will use an advanced seismometer, a heat probe, and precise location tracking to study the interior of Mars, which will have implications for understanding formation of all the terrestrial planets. It launches in March 2016.

There was also an update on Mars Science Laboratory Curiosity rover from Mike Meyer. I won’t go into detail since the mission is covered extensively in others blogs here on our site. Finally, there were updates on workshops that occurred recently about the Mantle of Mars, and about Planetary Caves.

MEPAG meetings typically occur twice a year with the working of reports going on in the interim. In addition to their important roles codifying inputs to the NASA Mars program, they also represent a great opportunity to re-connect with members of the Mars (scientific and retirement) community. Though I didn’t count, I’m guessing 150 people were there. SMS (serious Mars stuff) was accomplished.