The news that came out of the American Astronomical Society meeting this week in Long Beach, Calif. is staggering. The team behind the Kepler space telescope has discovered 461 new exoplanet candidates, bringing the total to 2,740. Latest estimates now show that there may be as many as one planet for every star in the Milky Way -- at least 100 billion planets.

Kepler quietly orbits the Sun in roughly the same orbit as Earth, unblinkingly recording the light coming from a particular patch of stars. Astronomers then sift through the data, looking for stars that have regular, predictable dips in their light, indicating an exoplanet might be passing in front of the star. They weed out false positives and make regular announcements of so-called planet candidates. The latest 461 candidates will require independent confirmation from other sources before they become bona fide exoplanets.

Four of the new candidates sit in the habitable zone around their stars, the not-too-hot, not-too-cold region where liquid water might exist on a planet's surface. One of these planets orbits a star with an effective surface temperature of 5,886 degrees kelvin, very similar to our own Sun, which has a effective surface temperature of 5,778 degrees kelvin.

I thought it would be fun to look at the raw data behind this new planet candidate, giving us some insight on how astronomers record and interpret transits. For help, I've been pestering Johanna Teske, an exoplanet researcher at the University of Arizona. She's been kind enough to indulge my many questions, but any misstatements here are surely my own.

To begin, let's pull up the planet candidate in NASA's Exoplanet archive. It is designated as Kepler Object of Interest (KOI) 172.02, which tells us something right away: it is one of two planet candidates orbiting this star. If you open the data validation report, you'll see that candidate 172.01 has a period of 13.7 days, shorter than even Mercury, which takes 88 days to make a lap around our Sun.

Candidate 172.02, however, has a period of 242.5 days, far closer to our standard Earth year. Its radius is listed as 1.4 Earth radii, making it a "super-Earth." This doesn't mean the planet is necessarily Earth-like in its composition, but it's close in size. That's not to say it isn't Earth-like as well, but as of now we don't know.

I use the free astronomy program Stellarium to browse the night sky. Stellarium doesn’t like coordinates in decimal form; it wants them in sexagesimal (minutes and seconds). So using a free converter (I used this one, but many others would suffice), we find KOI 172.02 has an RA of 19h 33m 2.62s, and a dec of 44 degrees, 52m, 8.00s. Plugging that into Stellarium’s search function, we find our star nestled in the constellation Cygnus, just below the star Delta Cygni (δ Cyg). 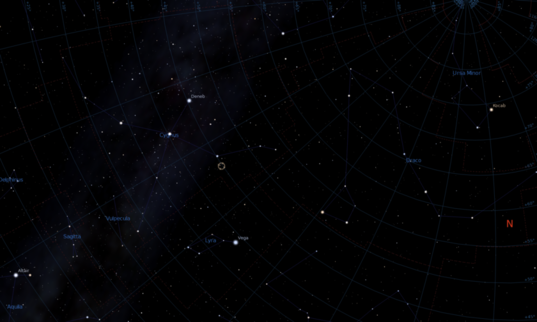 The location of KOI 172.02, a super-Earth exoplanet candidate, in the constellation Cygnus.

Using Stellarium, I can see that from my location in Tucson, Ariz., Cygnus is just above the northwest horizon at dusk and sets around 9:00 p.m. MST. It can also be seen shortly before dawn rising in the northeast. You can set Stellarium to your location to see if you can wave goodnight in the general direction of KOI 172.02. Although, in all likelihood, waving at any portion of the night sky probably means you're waving at some super-Earths, and possible Earth analogues, for that matter.

Anyway, let's find out when astronomers will be able to watch KOI 172.02 make another pass in front of its host star. Back on the object page in the Exoplanet Archive, clicking "Transit Service" pulls up a handy calculator. Select an observing site close to you or enter actual observing coordinates (I'll pick Mt. Hopkins, which is closest to me), and click Update. The next transit occurs on May 25, 2013 from 20:52 UTC to May 26, 2013 at 11:45 UTC. You can bet some observatories around the world will be tuned in to watch.

Of course, they won't see actually see anything the human eye can directly detect. Planet transits create light curves, where the relative flux is plotted on a graph against time. As the planet crosses its star, it blocks some of the light and the flux drops, rising again when the transit is over. You can see the light curve for 172.02 by clicking on the top Data Validation Summary link (the second link is for the other planet candidate, 172.01).

Exoplanet transits can create these curves in a variety of shapes and sizes. Notice how the relative flux only flattens out for a short period, at the very bottom of the curve, during the middle of the transit. This is due to a phenomenon called limb darkening. When you look at a star -- including our own Sun -- the center of the star appears brighter than the outer edges because the temperature and density decrease as you move outward from the center. If the star had a completely uniform brightness, once the planet was within the star's disk, the bottom of the graph should be completely flat.

Depending on the angle from which we see the transit, however, an exoplanet might never be fully within its star's disk. It might graze the top or bottom, which would produce an entirely different graph. Therefore, exoplanet astronomers can ascertain a variety of information about the planet and its host star by looking at these curves.

On a final note, you need not be an astronomer to get in on exoplanet hunting with Kepler data. Take a look at Martin Still's Can you find a new planet? article to learn more.