When we left our hero, Curiosity had traveled hundreds of millions of kilometers from Earth toward Mars, and had fewer than 20 meters left to go. She  will be descending at 0.75 meters per second toward the surface. Fewer than 15 seconds remain in her trip. It's time for the part of the mission that people seem to be the most scared about: the skycrane maneuver.

I want to begin by reviewing why something like the skycrane maneuver is necessary. There are two main reasons. First: Curiosity is huge, nearly five times the mass of Spirit or Opportunity. It's half again larger than a Viking lander. A Mars Exploration Rover weighs 185 kilograms; to get that 185 kilograms of rover safely to the ground required a protective enclosure of a lander weighing in at 348 kilograms.  Of all that 533 kilograms of landed mass, only 5 kilograms -- less than 1%! -- were science instruments.

Curiosity weighs 900 kilograms, of which 75 kilograms is science instruments. That's a much better proportion! But there is no way to wrap this thing in a lander large enough to protect it against an impact with the Martian surface. Instead, what you want to do is to go back to something more like Viking -- use a rocket-assisted descent -- except that Curiosity has to be able to drive away from the landing site, which means that the wheels have to serve in place of Viking's landing legs, and after the rover is on the ground you would really like to get the rockets and any remaining explosive fuel far away from your precious scientific exploration vehicle.

So: you need to set the rover down very gently, then sever the connection with the rockets and send them away, all without blasting the rover and its science instruments with rocket exhaust.

The first step in the Sky Crane maneuver is to separate the hard connection between the rover and the descent stage using pyros. Now all that remain are four connections: a triple bridle consisting of nylon cables, which bear all the weight, and an umbilical that supplies the electrical and electronic connections from the rover to the descent stage.

The three ropes come together at a "confluence point" underneath the descent stage, located near its center of mass; this design prevents differential loading on the bridle from tipping the descent stage. As soon as the hard connection between the rover and descent stage is severed, gravity carries the rover downward. The three ropes unwind together from an electromagnetically braked spool; it's the electromagnetic brake that controls the rate of the rover's descent. Here's what that spool looks like; there's another view here.

I actually got a chance to hold some of that nylon cable in my hand. Someone from JPL's education department came to my daughter's school a few months ago and brought some toys she'd sweet-talked out of Curiosity's engineers: various small bits of spent test hardware. One of these was a bit of the nylon rope. It's a bit thicker than clothesline, but it still really looks and feels like clothesline. I'll be honest; it was a little surprising how slight that cable is. It's plenty strong, though. 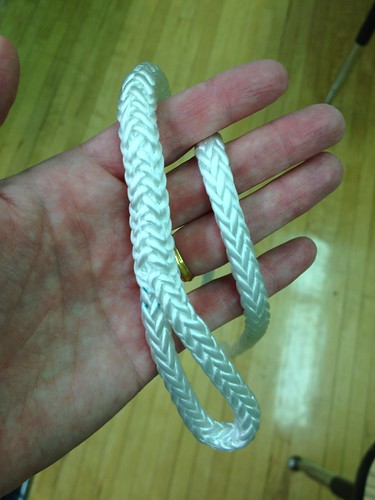 She also brought a used pyro cutter of the sort that will slice through this nylon cord later. This was surprisingly heavy. 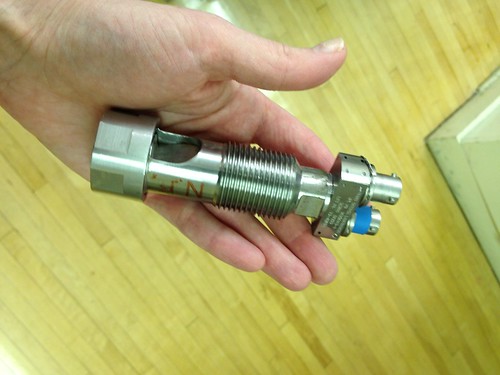 When the spool has unwound completely -- a process that takes seven seconds -- the rover will be suspended 7.5 meters beneath the descent stage, whose rockets are still firing. This is close enough that the descent rockets, which are canted outwards, will not impinge on the rover (even if the rover is unlucky enough to land on the side of a hill). But it completely separates the rocket-powered descender dynamically from the thing that it's landing.

Reading that in the article on Curiosity's landing, I can almost hear the relief in the voice of the engineers that they don't have to deal with the jostling of the landing on the descent stage in the logic surrounding the timing of the next few events. If that didn't make sense, I'll put it another way: from an engineering standpoint, it's easier to land the rover safely and then get the rockets away from the rover with the rover dangling several meters below the rockets on strings. From that article:

Implementation of the Sky Crane architecture presents many advantages over historical touchdown methods, namely airbags and legged landers. The two-body architecture keeps the engines and thrusters away from the surface, mitigating surface interactions like dust excavation and trenching, while enabling closed looped control throughout the touchdown event. The bridle decouples the touchdown event and associated disturbances from the descent stage controller. Additionally, rather than using a traditional touchdown sensor, touchdown is detected through a persistence of reduced throttle commands necessary to maintain the constant descent rate.

Due to the persistence of tethering during touchdown and low touchdown velocities, the system has greter touchdown stability and experiences lower impact loads than other landing systems. High stability and low loading, on par with rover driving loads, means that a separate touchdown system is not required and the egress phase can be eliminated. Rather, the rover's rocker-bogey suspension, which is specifically designed for surface interaction, is the touchdown system and it is properly positioned to begin operations immediately after touchdown.

As the spool plays out, the "landing gear" also come out, in two steps. They dangle too, waiting to meet the ground.

All this time (all 7 seconds!), the descent stage has continued to descend at a rate of 0.75 meters per second. When the last of the rope unwinds, it imparts a small jerk on the descent stage, and the spacecraft takes two seconds to wait for the rockets to compensate for that motion. After those two seconds, the rover starts expecting touchdown.

Curiosity pays close attention to the amount of force that the rockets must put out in order to continue the constant descent rate of 0.75 meters per second. When the ground is supporting the rover, that force will suddenly decrease. Curiosity will wait one second after that decrease -- an eternity, to a computer! -- checking to see if that decreased force remains constant, and checking also to make sure that the amount of force that the rockets are throwing out is consistent with the weight of the descent stage. When those criteria are met, the rover fires the pyros that free those metal guillotines that will cut the three ropes.

The descent stage holds a constant altitude for 187 milliseconds, allowing time for the umbilical to be cut, then throttles up the rockets, ascending vertically at first but then pitching to 45 degrees. Free of the rover's weight, the descent stage flies off. Originally, it was going to burn to depletion; but at some point they changed that plan, commanding it instead to burn for a fixed time. Then the rockets cut off, and the descent stage (and any remaining fuel) crash at least 150 meters away.

Maybe a little creak or scrape here and there as the heavy load of the rover presses down on the rocker-bogie suspension system, which, in turn, presses down on Martian rocks and soil. Six wheels on Mars, at the moment of touchdown.

The rover won't immediately be able to get a panoramic view of its surroundings; its mast will still be folded flat to the deck, its seven mast-mounted eyes pressed into its back to prevent any dust thrown up by landing from settling onto the optics.

How will we know if it worked?

As these events play out, all three Mars orbiters will be listening to Curiosity broadcast from a sequence of UHF antennae -- first one on the aeroshell; after the parachute separates, the descent stage; after the descent stage flies off, the rover. The orbiters will be close enough to the rover to get fairly detailed information in this way. The venerable Mars Odyssey will provide -- as it did for Phoenix -- a "bent-pipe" relay, forwarding the data on to Earth as it receives it from the surface of Mars. (So I imagine that Odyssey's recent safing event, a result of a worn out reaction wheel, made Curiosity mission managers somewhat unhappy. Odyssey's back in action, on its backup reaction wheel.)

We'll also be able to hear Curiosity from Earth, though not with the high fidelity that the Mars orbiters will manage. On Earth, signals from the UHF antenna are so weak that we'll only get "semaphore codes" -- radio tones that match a prearranged code that indicate when such-and-such a step has been completed.

And then we will have two rovers on Mars. Granted, it's possible that something in this process will fail and we will still just have Opportunity. I'm certainly nervous; landing a spacecraft on another planet is incredibly difficult, one of the crowning achievements of modern civilization, and it doesn't always work. Ultimately, though, I would much rather expect success, and be wrong, than predict failure, and be right.

I know how hard Curiosity's team has worked to get this rover to Mars. I know how smart they are, and how dedicated. We should be realistic: there are challenges here. But we wouldn't be trying to do this if we thought we couldn't succeed. And make no mistake: this is a gigantic "we," an entire country willing to support our greatest minds in the attempt of the most challenging goals.

So: I think we're going to do it. I can't wait for Sunday night, August 5, to hear the roar of the crowd I'm in, to see the engineers jump up and down, to imagine the thousands of people at Planetfest celebrating our collective achievement. We will land on Mars!