How Curiosity Will Land on Mars, Part 2: Descent

In Part 1 of this series I took you through Curiosity's new guided-entry technology to a point still 11 kilometers' altitude. The next part of Entry, Descent, and Landing, usually abbreviated "EDL," is the descent, a two-minute period that will take the rover nearly all the way to the surface. Curiosity's descent can be split into two segments: parachute descent, and powered descent.

The parachute descent phase lasts only 50 to 90 seconds (depending on atmospheric conditions). But during this brief time, according to this paper by the rover engineering team, "the parachute system acts to burn over 95% of the remaining kinetic energy.... In this short time descending under the parachute, the system undergoes a series of reconfigurations: jettisoning its heatshield, acquiring the Martian surface with onboard terminal descent sensor, and preparing the spacecraft to initiate powered descent."

When we last left our hero, it had descended to about 11,000 meters and decelerated to Mach 2.0 or roughly 450 meters per second. Slowing to that velocity -- still supersonic -- triggers the deployment of the parachute, which is only qualified up to Mach 2.2.

The parachute is enormous. Parachutes for Mars descent have not changed much since the Vikings landed; all have used what's called a disk-band-gap design, in which there is an open ring between the upper "disk" and lower "band," which increases the stability of the 'chute at supersonic speeds. However, Curiosity's parachute will be the largest ever opened on Mars, at 21.5 meters across, compared to Viking's 16.5 meters, Spirit and Opportunity's 14.1 meters, Pathfinder's 12.7 meters, and Phoenix' 11.8 meters. Remember this photo, which I consider one of the greatest pictures in the history of planetary exploration? Curiosity's is twice the size. And yes, Mars Reconnaissance Orbiter will try to repeat this photographic feat (more on that in a bit).

When the parachute first opens, it's likely to undergo "area oscillations," repeated snaps of the parachute from not-quite-open to open, events that place huge forces on the 'chute. These should disappear once the spacecraft has slowed to Mach 1.4.

Another concern after the parachute inflates is something called "wrist mode oscillations." This is where the spacecraft spins underneath the parachute. Here's an interesting sentence from Ravi's article: "Historical attempts to bound the wrist mode behavior and its time evolution following parachute deployment have failed to bound the behavior during flight (e.g. MER-B)." Translation: we're trying to figure out ways to make our computer simulations produce the same behavior we observe in reality, but we're not there yet. Without an understanding of why this oscillation happens, it's really hard to engineer a system that prevents it.

Instead, throughout the descent phase, Curiosity will use the little thrusters of its reaction control system to counteract these oscillations, bringing the spacecraft to a stable orientation.

If the huge parachute does its job, it will take less than 30 seconds to decelerate the spacecraft to subsonic speeds. Then, and only then, is it safe to drop off the heatshield that protected the rover throughout its fiery entry. Pyros will fire to unlock push-off springs that shove the heatshield downward and away from the spacecraft, exposing the wheels as well as the radar system that will sense the ground. Curiosity will wait five long seconds for enough distance -- 15 meters -- to develop between the heatshield and the rover before paying attention to the measurements from the range-finding "terminal descent sensor" (inevitably abbreviated "TDS"). This prevents the descent sensors from responding to reflections off of the heatshield, which will be a lot closer to Curiosity than Curiosity is to the ground! 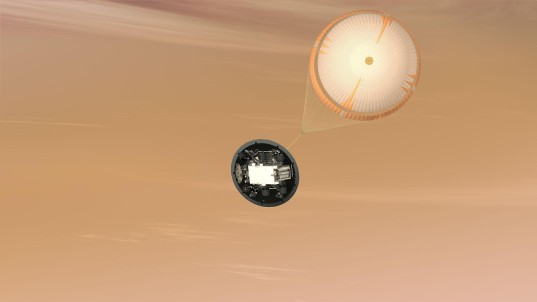 Artist's concept of the Curiosity rover descending toward Mars under an open parachute.

The measurements from the rangefinding terminal descent sensor are absolutely critical to the timing of the rest of the landing events. But since Curiosity is not descending vertically, the altitudes that the terminal descent sensor are measuring are of spots at some distance away from the spot at which Curiosity will land. It could land as far as 700 meters away from the last range measurement it takes before its backshell separates. This is the reason that the Curiosity landing site has to be flat on several-hundred-meter length scales.

Another sensor that will be operating at this time is the Mars Descent Imager, whose photos will provide context for Curiosity's landing spot and help the science team figure out exactly where they are when they land.

So the terminal descent sensor is pinging away at the surface, providing continuous data on Curiosity's altitude, as it continues to descend and decelerate under parachute. The next step in the process comes when the spacecraft has slowed to about 80 meters per second, at an altitude somewhere around 1.5 kilometers. If all of this sounds rather approximate to you, it's not; there are 500,000 lines of code stored in Curiosity's electronic brains to handle every possible set of landing conditions, and the landing engineers have spent years poking and pushing at that code, throwing increasingly bizarre and challenging sets of conditions at it, including all kinds of bad-luck and low-probability failures of various components, to make sure it can handle every foreseeable contingency.

At 100 meters per second and 1500 to 2000 meters altitude, the spacecraft is ready to initiate the next step: powered descent. It prepares by opening the fuel lines to the 8 descent thrusters on its jetpack (otherwise known as the descent stage), and commanding them to 1% throttle.

Then comes what is, for me, the scariest moment in that landing animation. Pyros fire to separate the descent stage from the backshell and parachute. Suddenly lacking any means of slowing down, the spacecraft free-falls, accelerating toward the ground under Martian gravity for one heart-stopping second, speeding up from 100 to 120 meters per second. The one-second free-fall is necessary to ensure that the descent rockets don't slam the rover back into the backshell when they fire up. But: yikes.

As the rover is free-falling, the rockets are already on. After that one second, they're throttled up. Still, the thrusters are not being used to decelerate the rover; at first, they are commanded to reduce any rotation of the spacecraft to zero as it continues to fall, accelerating slightly. Only when rotation has been damped, after about 400 meters of descent, do the thrusters power up to begin to slow the descent again.

At this point, the thrusters will smoothly operate to slow the spacecraft, completely halting its horizontal motion while bringing its vertical descent rate to 20 meters per second. This will take roughly 30 seconds, give or take, depending on the altitude at which the rover fell out of its backshell. Meanwhile, the backshell and parachute, equipped with no deceleration devices, will overshoot and crash ahead of the landing site. 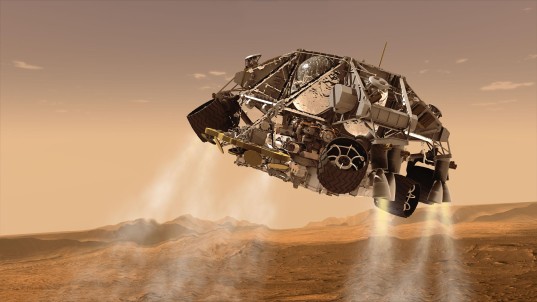 Artist's concept of Curiosity under its descent stage during the final minute before the rover touches down on the surface of Mars.

The rover will calmly descend at 20 meters per second until its terminal descent sensors tell it that it has reached an altitude of 50 meters. Then the thrusters are throttled up again to decelerate the descent at a constant rate until it's reached a rate of 0.75 meters per second; it continues this descent rate for the rest of the landing. I paused at the moment after I wrote those words to get up from my chair and try to walk at that rate. It's about half my usual walking speed: very slow.

By the time it gets to an altitude of 21 meters, the descent stage will have burned through more than half of its 400 kilograms of fuel. If the rockets kept thrusting at a constant rate, they'd actually lift the rover upward. They have to be throttled back so much that they start to operate inefficiently. So four of the eight engines are shut down, allowing the four remaining engines to operate in a better zone (at around 50% of their full power). If you look at the artist's concept above, you'll notice that four of the engines are pointed straight down, and four are canted outward at an angle. The downward-pointing ones are shut down; the angled ones are left on. This prevents rocket exhaust from impinging on the rover after it is lowered from the backshell.

Under the four rockets, the rover waits for 2.5 seconds for any wobble induced by the switch from eight to four rockets to settle out. Then it's ready for the next phase: the Sky Crane.

Are you on the edge of your seat yet? That means it's a perfect time for me to say: tune in next week for the continuation of this multi-part drama!

But I did promise to talk about Mars Reconnaissance Orbiter HiRISE's planned attempt to image the spacecraft while it's descending under parachute. Curiosity's parachute will occupy about four times as many pixels as Phoenix' did, so it should be easier to spot. However, Mars Reconnaissance Orbiter's vantage point will not be as favorable for successful imaging. It looked at Phoenix from quite an oblique angle; it will be looking almost straight down at Curiosity. That leaves little room for error in the timing of the photo. The parachute is so big that it could be spotted easily in a Mars Reconnaissance Orbiter Context Camera photo, which has a much wider field of view than HiRISE. However, the Context Camera is not going to be commanded to make the attempt. If we get a picture of the spacecraft in midair, it will be from HiRISE.

One last thing: Some commenters on the first part of this series noticed I'd made a factual error. While in the guided entry phase, the aeroshell's blunt nose tips down, not up as I said before. I've corrected the other entry.

Thanks for the great articles on Curiosity's decent to the martian surface. Well done, can't wait for the next installment.

This is pretty thrilling stuff - and can even give Wily Coyote a run for his money just by the sheer logistics. The key - assuming, of course, that the landing is successful - will be in being able to successfully repeat the steps involved in the process again in future missions.

How were all the EDL systems tested? I know the atmosphere and gravity on Mars are different so models on earth would not be representative. Was there any way to build representative test models despite these differences? I would love to see a video of a real operating physical model of the powered descent stage.

Part 2 to me is not scary. We've done that on all Lunar landing missions as well. Part 3, Skycrane, is terrifying. I've said before I'd never approve of this for a landing system. I do hope it works and will not be used on future missions. If it fails I will not be saying 'I told you so.' I'll be devastated like everyone else. Mars is known as the planet of death for our friends, the spacecraft. Great luck and prayers to the EDL team for a safe landing.