This month my latest paper made it to print in the Astronomical Journal. It's a short piece that describes a serendipitous discovery that my collaborators and I made while searching for a distant Kuiper Belt Object for the New Horizons spacecraft to visit after its 2015 Pluto flyby. Last October, at the annual American Astronomical Society Division of Planetary Sciences meeting, I gave a talk about this neat little object we discovered. Now that the paper is out, I thought it might be interesting and fun to assemble a blog post around the slides I prepared for that talk. So without further ado, I give you: 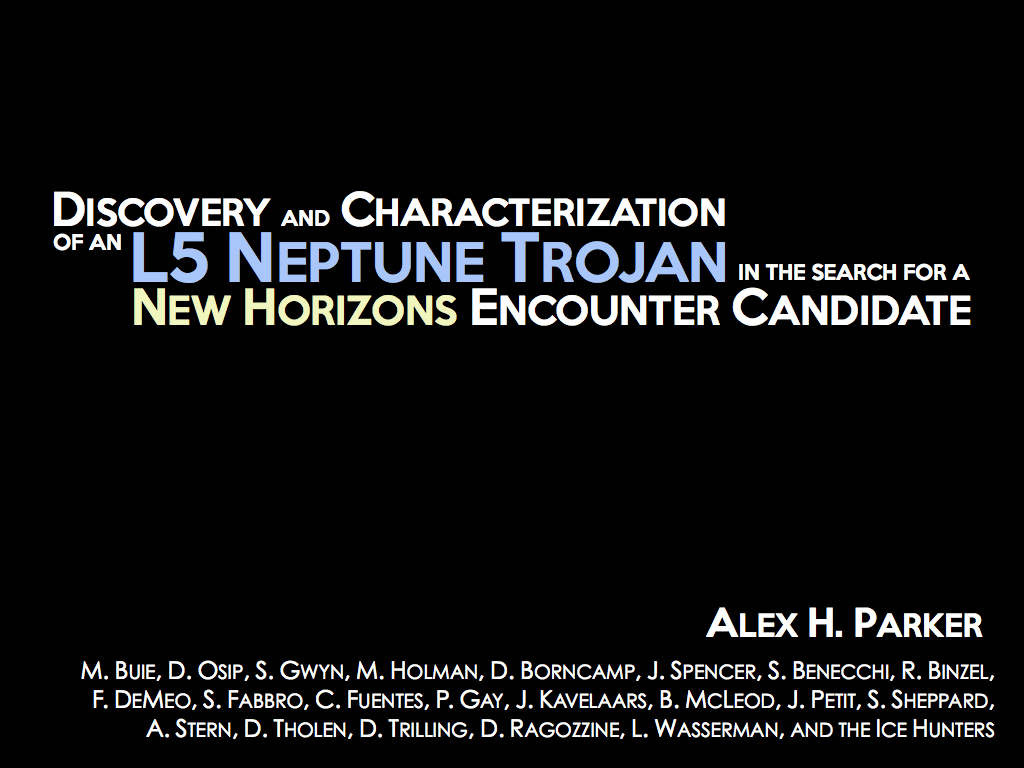 So, what kind of serendipitous discovery did we make? We found a Neptune Trojan, now called 2011 HM102! And it's not just any Neptune Trojan: it makes a list of superlatives. It's the largest trailing Trojan known in the entire Solar System, it's the most inclined Neptune Trojan known, and (as of right now) it is the closest known object of any kind to the New Horizons spacecraft! Read on to learn about how we found 2011 HM102 and what we have learned about this remarkable little world.

Jupiter was the first planet discovered to have a Trojan population, but over the subsequent decades planetary astronomers have turned up Trojans for Earth, Mars, Neptune, and Uranus as well. Earth and Uranus both only have one known Trojan each, while Mars has a handful.

Jupiter's population of Trojans, on the other hand, is quite large: the Minor Planet Center lists over 5000 known objects in the planet's L4 and L5 swarms, and it's estimated that the total number of objects in Jupiter's Trojan swarms is about equal to the total number of objects in the Main Asteroid Belt between Mars and Jupiter (somewhere around a million objects larger than 1 kilometer across).

The distant ice-giant Neptune has nine known stable Trojans. While at first glance it might seem that since we know of more than 5000 Trojan companions for Jupiter and only nine for Neptune, we can give Jupiter the award for "biggest Trojan swarms." Not so fast! Neptune is much farther away from us than Jupiter, and it is much harder to detect small objects (like Trojans) at Neptune's distance than it is at Jupiter's. Early estimates correcting for this effect indicate that Neptune's Trojan swarms may have upwards of 10 times as many objects in them as Jupiter's swarms, or equivalently 10 times as many objects as reside in the Main Asteroid Belt. So Neptune is no slouch when it comes to Trojans! The trick is finding these distant, slow-moving, and exceedingly faint objects. Which brings us to... 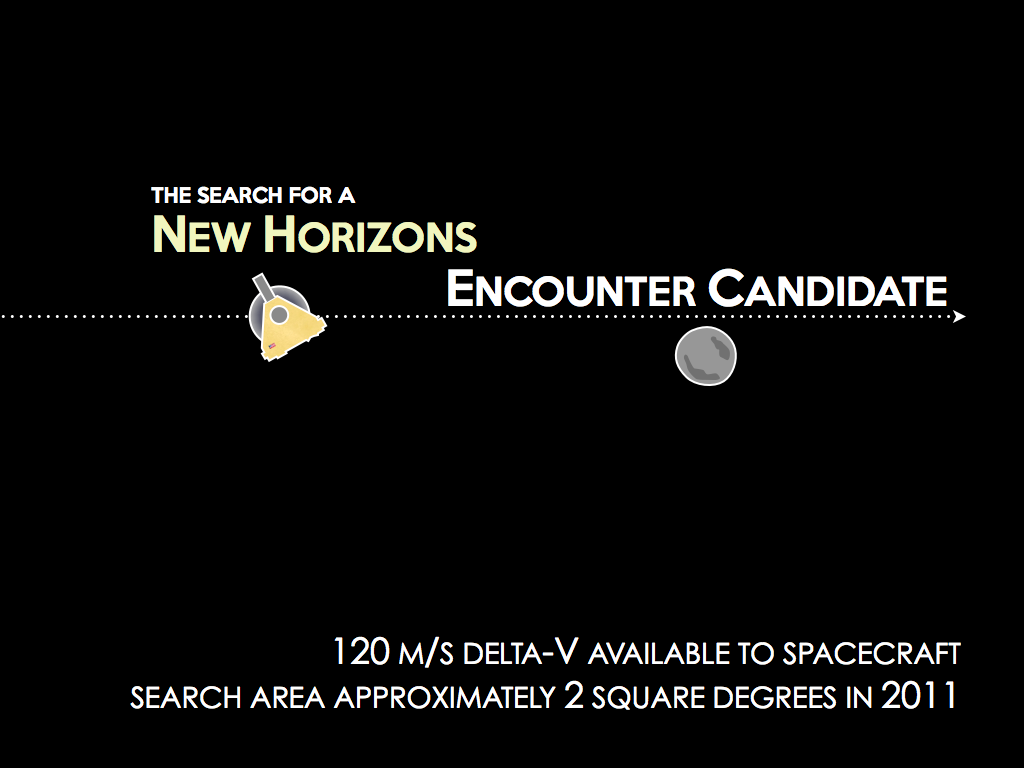 Why were we at the telescope when we found 2011 HM102? Well, we have a spacecraft in need of a world to visit!

New Horizons is currently flying out to meet Pluto at a breakneck speed of over 13 kilometers per second. In July of 2015, it will fly through the Pluto system, collecting as much data as it can with its onboard instruments, and then beam all that information back to Earth. However, there's no stopping New Horizons at Pluto. The spacecraft will continue outward into the Kuiper Belt at that incredible speed, with enough fuel left onboard for a small course change.

Our goal is to find a small Kuiper Belt Object (KBO) for New Horizons to study once it has completed its primary mission to Pluto. Because of its limited remaning fuel supply, it can only make a small course change, meaning that it can only reach a very small slice of the outer Solar System. However, the outer Solar System is filled with billions of small, icy objects, so we set out to find New Horizons the perfect candidate.

Why didn't we simply look into the catalogs of known KBOs and pick one for New Horizons to visit? Unfortunately, all the KBOs that would be accessible to New Horizons fall in an area of sky that has been very poorly searched for KBOs to-date: the Galactic plane, near the heart ofSagittarius. As any amateur astronomer knows, this area of sky isbeautifulthrough a small telescope for precisely the same reason that it is a terrible place to search for faint moving specks like KBOs - it's absolutely packed with stars!

Astronomers conducting surveys for KBOs usually pick fields far away from the Galactic plane to avoid dealing with images filled to the brim with boring old stars. So, unfortunately, that means we had to do our own survey, and we got to deal with the nightmare that is dredging through these starfields for moving objects. Good thing we enjoy challenges.

So how are we managing to find our wily little specks? First off, we need a lot of light-collecting power, so we need some of the largest telescopes in the world. Second, we have a relatively large area of sky to search - roughly 8-10 times the size of the full moon - so we need big imagers.

That limits the facilities we can use to just a few; the 3.5 meter Canada-France-Hawaii telescope (CFHT) with its huge MegaPrime imager, the twin 6.5 meter Magellan telescopes with their three large-format imagers (IMACS f/2, IMACS f/4, and MegaCam), and the enormous 8.2 meter Subaru telescope with its SuprimeCam imager.

Starting in 2011, we have been turning these telescopes and their giant imaging arrays toward the patch of sky were we expect to find the Kuiper Belt objects that New Horizons can reach.

Once we have collected the images, we go to work on them. We apply special techniques that remove stationary objects (like stars) and reveal moving objects (like Kuiper Belt objects). Here's an example of image data from a previous survey (from a less-crowded starfield) in three stages of this filtering process, leaving behind only one (moving) object, an asteroid:

It's hard work, but does it get the job done? Yes!

Since the beginning of our search in 2011 we have discovered nearly 30 new KBOs, many of which come exceedingly close to New Horizons' trajectory. Here's an animation I made to show these objects (as well as objects from a precursor survey performed in 2004-2005) as seen by New Horizons as it flies through the outer Solar System:

Above is an illustration of our survey's beam through the plane of the solar system, targeting distant, encounterable Kuiper Belt Objects. This targeting coincidentally passes right through Neptune's trailing L5 Trojan cloud. White points indicate objects discovered by our survey. Also illustrated are the Pluto system, New Horizons, and 2008 LC18 (the only other known stable L5 Neptune Trojan).

During the normal search process, we spotted 2011 HM102 as fast-moving and very bright - it's the brightest object we've discovered to date by a wide margin.

We also quickly realized that it had a very high inclination of about 30 degrees. Because it was so bright, close, and highly inclined, we decided to devote a little follow-up time to it the following year. Those follow-up observations allowed us to really nail-down its orbit and determine that it was, in fact, a Neptune Trojan.

Using the updated orbit, I ran a large number of simulations to determine how stable 2011 HM102 was, and found that for at least a billion years, 2011 HM102 happily continues to remain in its resonant configuration with Neptune. 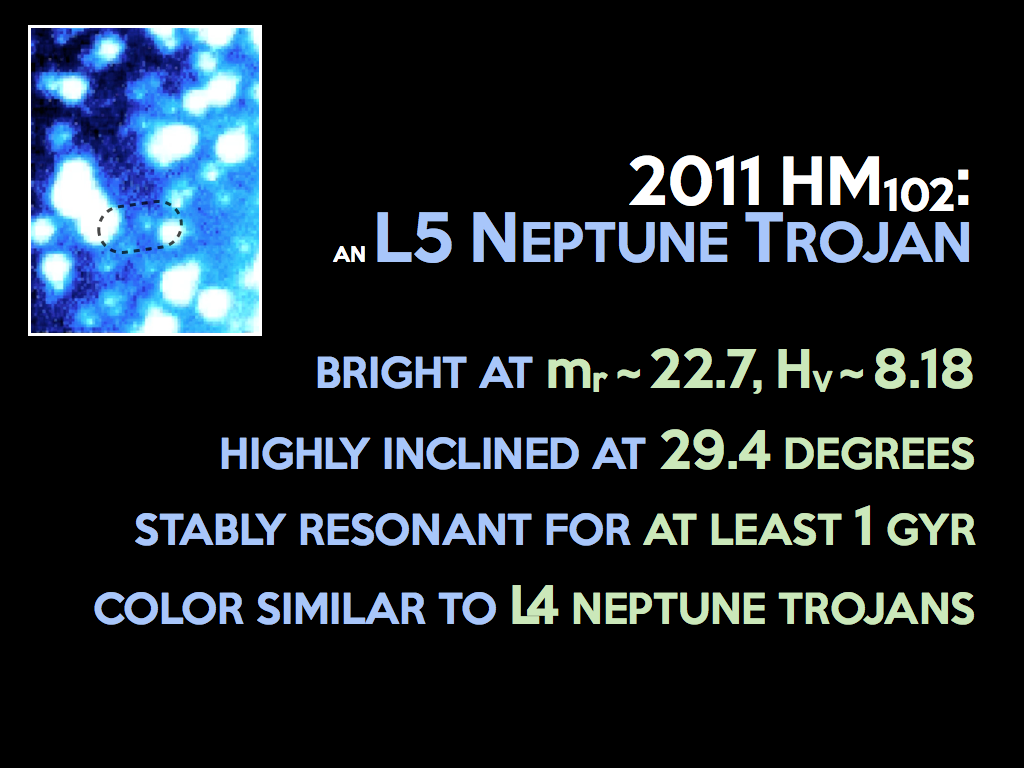 Since we were now confident it was a true L5 Neptune Trojan, we could compare it to the other Trojans. 2011 HM102's high inclination (29.4 degrees) is higher than any other known Neptune Trojan, and only a few percent of Jupiter's Trojans have higher inclinations. In addition, it's as bright or brighter than Jupiter's largest L5 Neptune Trojan Patroclus, which is a binary. If 2011 HM102 is a single object, and its albedo is similar to Patroclus, then it is the largest known L5 Trojan in the solar system.

Because 2011 HM102 is quite bright (compared to the other objects we had been finding), we could also measure it's color. This is done by collecting images of the object through various color filters, and comparing how bright it appears in one color filter versus another. This was the first measurement of the color of a trailing Neptune Trojan, and we demonstrated that it has a very similar color to the leading Neptune Trojans.

We recognized one other interesting aspect about 2011 HM102: it comes fairly close to New Horizons! As of right now, it is the closest known object of any kind to New Horizons - about 2.5 AU away. In the later parts of 2013, it will pass within 1.2 AU of New Horizons, where it will be bright enough to be just detectable from New Horizons.

While the New Horizons team decided that they would not target 2011 HM102 for observations (as the preparations for the Pluto approach take precedence), I still think 2011 HM102 represents something of a Rubicon. This is the first known, small trans-Neptunian object that New Horizons will pass, symbolically markingits entrance into trans-Neptunian space.

It’s not a matter of if, but when. Be a Planetary Defender and join our mission to defend Earth.