It was a big week for the Science Guy, and for science. Bill Nye served as honorary co-chair of the March for Science in Washington DC. His new Netflix series, Bill Nye Saves the World, premiered the next day, Friday, April 21st. Two of the show’s thirteen episodes are devoted to space science and exploration. Bill talks about all this in a special conversation with Mat Kaplan. Planetary Society Senior Editor Jason Davis marks the beginning of the end for the Cassini mission at Saturn. While Bruce Betts and Mat are fresh out of rubber asteroids, there’s no shortage of Random Space Facts and cosmic comedy in What’s Up. 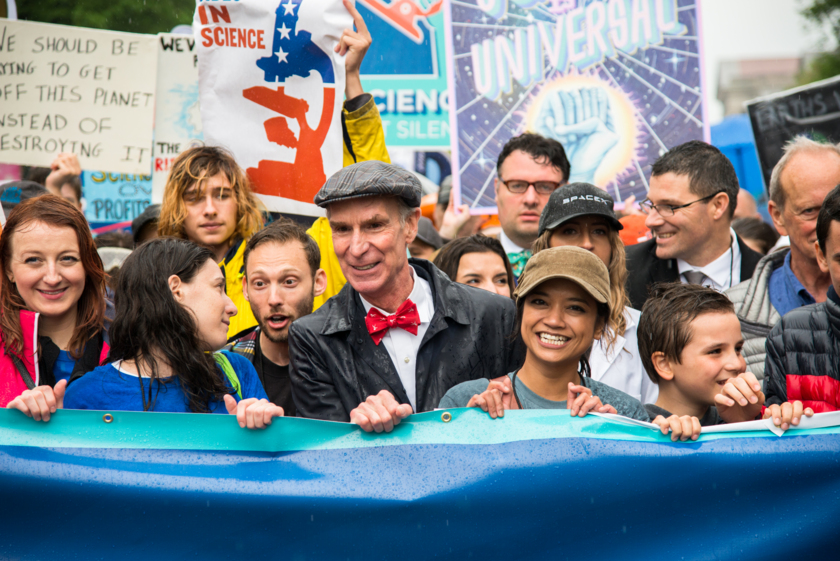 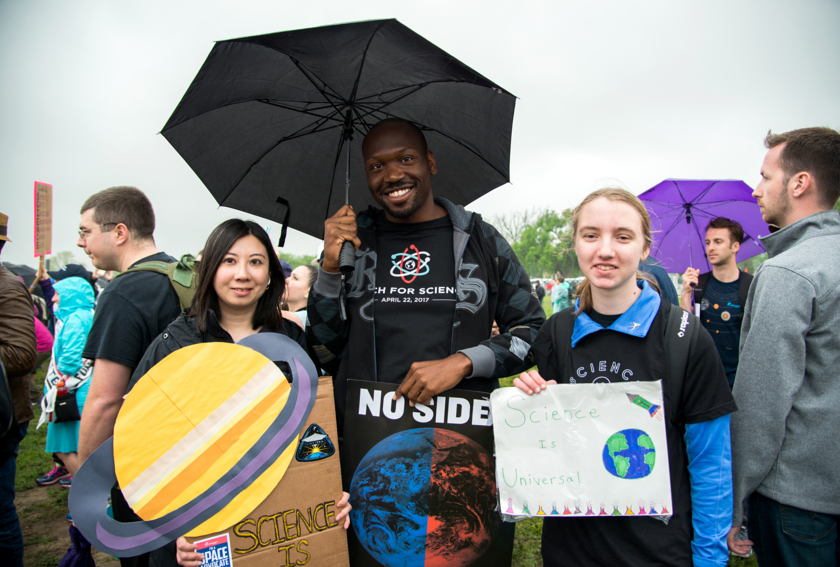 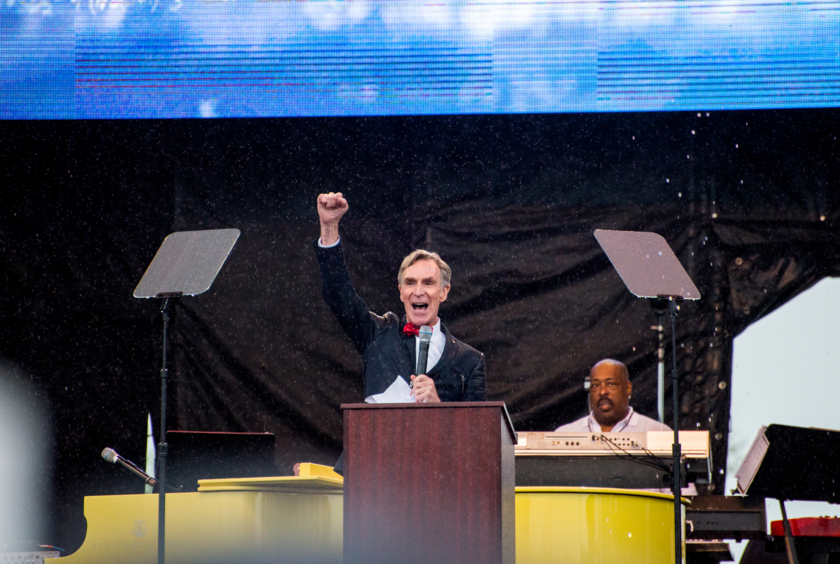 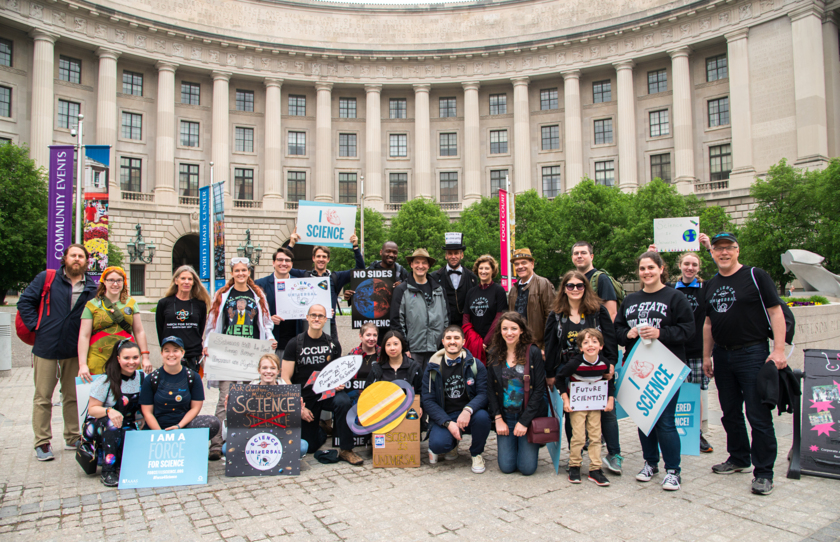 Planetary Society members and volunteers gather before the March for Science in Washington, D.C., April 22nd, 2017 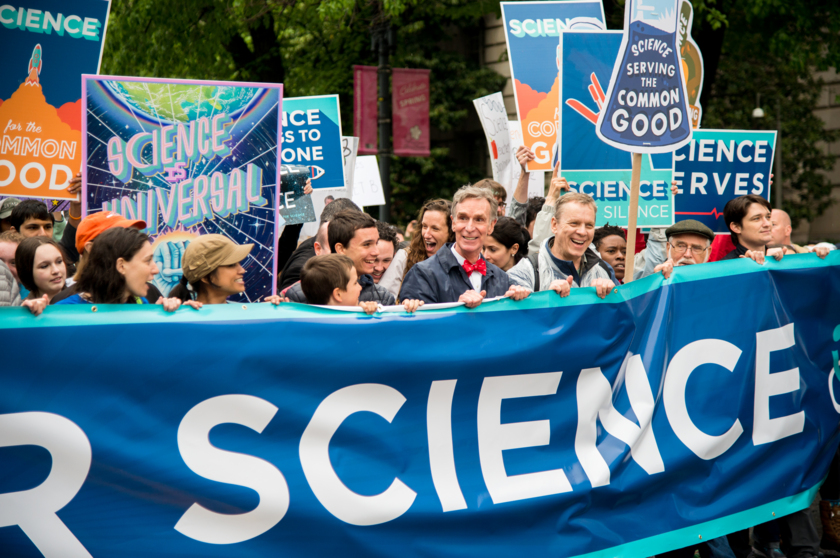 What letter is used to classify the most powerful class of solar flares, as observed from near Earth in X-rays? (Using the most popular system now in use.)

Complete the contest entry form at http://planetary.org/radiocontest or write to us at planetaryradio@planetary.org no later than Wednesday, May 3rd at 8am Pacific Time. Be sure to include your name and mailing address.

Within 100 or so, how many CONFIRMED exoplanets have been discovered?

Seven moons in our solar system are larger than Pluto…so far.

I haven't had a chance to watch the show yet, but one more reason for pushing forward with science education might be implied by some rather vicious responses. I was surprised to find the ratings on imdb to be very low. Going to the user-reviews you'll find that for the first pages (I only went through 4 of 8) they have things in common: they all gave the lowest rating (which happens rarely), they all used similar termina, the word 'propaganda' is frequently used, and the overwhelming majority of those reviewers had written no other reviews. Which would mean they went through the trouble of registration only in order to bash the show. Either they really hated it that much, or what is suggested is a campaign. Which isn't new. On comment sections on The Guardian-website you'll frequently find a large number of Putin-supporters attacking Putin-critical articles with equal venom (and few arguments), often under all too suspiciously chosen 'net-names'. Not everyone will like it, but it seems a little too obvious. Which would imply that the anti-science campaigning, above mere denial, is alive and kicking, and one should ask who's initiating it. It's too organized for being mere, in itself curious, dislike of science. There be dragons.

I love, love Planetary Radio, but I am so disappointed that TPS decided to dedicate an episode to Mr. Nye's new Netflix series. Mr. Nye, of course, can produce whatever he wants. He is clearly a progressive activist and the series takes strong positions accordingly -- some of which, I think it's safe to say, are controversial. Since TPS has stepped in and decided to publicize a controversial show that their CEO has done outside of his capacity as CEO, I think TPS is making a rather bold statement about what they stand for as an institution. It seems like a dubious strategy and a really, really great way to narrow the pool of potential society members. I've mentioned elsewhere that it reminds me of Spinal Tap -- TPS is making it's audience a bit “more selective.”