What Is the Decadal Survey? 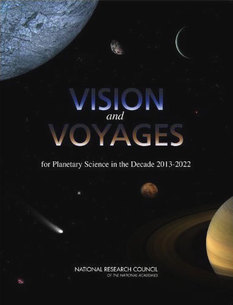 Vision and Voyages for Planetary Science in the Decade 2013-2022 or simply, “the Decadal,” is a report prepared by National Academy of Sciences at the request of Congress and NASA. It was written by a steering committee comprised of leaders in the field of planetary science, and  represents the official consensus on the top priority scientific goals, and the missions required to satisfy them, for the ten-year span between 2013 and 2022 [1].

The Decadal is the underpinning of essentially all discussions about priority of missions and the commitment of resources within the scientific community, NASA, the Office of Management and Budget, and Congress (pretty much anyone who has a stake in planetary exploration). You’ll hear the report mentioned a lot when people argue about if NASA is properly following the Decadal, or if mission X is in line with Decadal recommendations.

Lawmakers and NASA take the Decadal seriously, but they are not bound to its recommendations. Generally, they try to follow the spirit and goals of the report, since it is the only definitive guide to the priorities in the field; however, budgetary limitations or other issues will inevitably prevent highly-recommended missions (like the Europa orbiter of the first Decadal Survey) from happening.

Writing the Decadal was a large effort over the course of a year and a half. Sixteen people served on the main steering committee, which was led by Dr. Steve Squyres, head of the Mars Exploration Rover Spirit and Opportunity missions. Dozens of other people served on panels representing specific areas of study in planetary science: Inner Planets, Mars, Giant Planets, Satellites, and Primitive Bodies. The full report weighs in at a meaty 398 pages [pdf].

Since the Decadal represents an official consensus, it makes compromises between many disparate needs and desires within the planetary science community, and, as such, there are people who were disappointed with the final version.

The best way to understand the recommendations in the Decadal Survey is to read the executive summary in the report [pdf]. There are many different types of recommendations, and it’s good to get a sense for the complexities.

Briefly, though, the Decadal recommends a balanced program of solar system exploration. This means that there should be a conscious effort to prevent any one program from growing too large or expensive at the cost of others.

Planetary Science within NASA is broken down into several major programs, these are: Flagship (big) missions, New Frontiers (medium) missions, Discovery (small) missions, research and analysis, and technology development. All of these programs are crucial to the success of NASA’s goals.

The Decadal gives various recommendations given the budgetary environment that the division could face, but, generally, it prioritizes support to the scientific community (research funding), a steady pace of small missions (Discovery), two additional medium-sized missions (New Frontiers), and a Mars rover that will cache samples of Martian soil for eventual return to Earth  followed closely by a spacecraft to investigate the subsurface ocean of Jupiter’s moon, Europa (the top-two flagship missions).

There is a lot of generalization in the above statement, so again, reading the executive summary in the report [pdf] is highly recommended.

The Planetary Society stands by the overal goals and priorities stated in the Decadal Survey, and is working hard to ensure that NASA has the resources to fully pursue them. You can help, take action at our Space Policy & Advocacy page.

[1] Note that when scientists and others here at the Planetary Society refer to the Decadal, we are referring to the most recent report released in 2011. There was an earlier Decadal Survey was released in 2002 and served the same purpose for the time period between 2003 and 2012.

You are here:
Home > Get Involved > Be a Space Advocate > Become an Expert