This is not your universe unfolding. This is another universe, or a good-sized piece of one, as simulated by Illustris, a software model developed internationally over many years. It took 8,000 processors running in parallel 3 months to build the model. Your desktop PC (if you still had one) would need over 2,000 years. Watch as individual galaxies form, interact with dark matter, gather in clusters, drift, collide and reform over 13.4 billion years, in a cube that is about 33 million light years across. And you thought your lunch today was awesome. 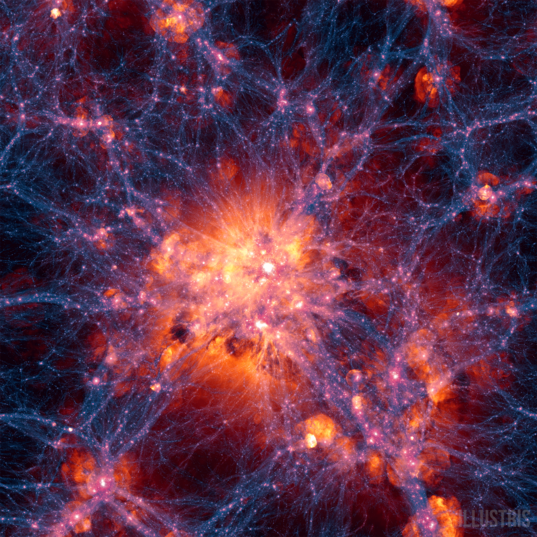 Illustris simulation of the universe

Cool! But the video isn't very good unless you like getting dizzy and not knowing what's going on. The Illustris collaboration have a really nice webpage where you can learn about what makes their simulation special. Specifically, they include detailed simulations of the hydrodynamics, chemical evolution, galactic-scale winds, star formation and supermassive-black-hole dynamics in a box almost 30 times bigger than previous simulations. This video is pretty cool. It also gives a nice guide to the color schemes so you can try to figure out what's going on in the spinny video.

Wow, this movie is also awesome: http://www.illustris-project.org/movies/illustris_movie_elliptical_formation_1pMpc.mp4 Showing the formation of a giant elliptical. You can see clouds of gas build up around the galactic cores and then get blown away by the AGN quasar turning on: poof! poof!

They should run those 8000 processors in parallel for six months to get a sneak preview of the next 14 billion years! A slower or non rotating view might more clearly show structural change over time.

I'm getting dizzy because the large simulations before this one in turn got the matter clusters and voids correct (Millenium), then the dark matter filaments (Bolshoi), and now the ellipticals and even spirals (Illustris). I notice that the solar system @ 4.5 Ga bp or 9.3 Ga "universal time" is concurrent with the metallic gas (high Fe/H) from large scale starbursts having seeded the rest of the universe at its maximum extent as judged by the video colors. That may be the maximum habitability period of the universe, making us copernican mundane all over again.