It’s looking likely that a newly discovered comet is actually an interstellar interloper from beyond our solar system.

Since its discovery on 30 August, more and more measurements of C/2019 Q4 (Borisov)—named after the amateur astronomer from Crimea who found it—indicate it isn’t orbiting our Sun. Even NASA now says the comet’s extrasolar origin is promising.

If confirmed, C/2019 Q4 (Borisov) would be the second-ever interstellar object we’ve seen pass through our solar system, following the discovery of 'Oumuamua in 2017. The new object, which sports a fuzzy coma in images, would also be the first definitive interstellar comet; 'Oumuamua looked like an asteroid and behaved a little like a comet. 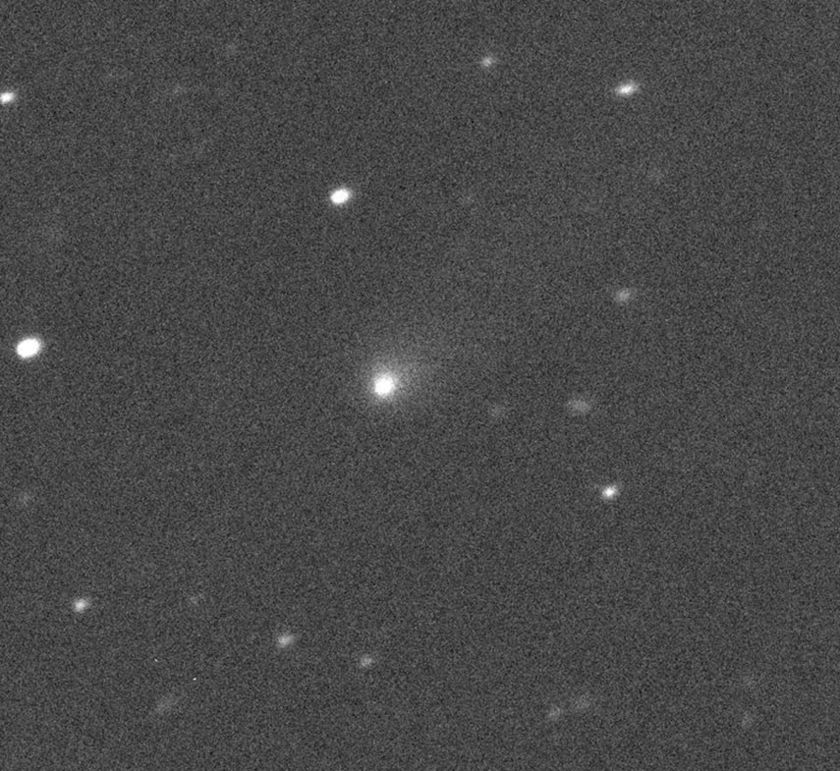 Comet C/2019 Q4 (Borisov) as imaged by the Canada-France-Hawaii Telescope on Hawaii's Big Island on 10 September 2019.

Comet C/2019 Q4 (Borisov) will reach perihelion—its closest point to the Sun—on 8 December 2019. To learn more about this comet and other interstellar objects, I spoke with Karl Battams, an astrophysicist and computational scientist at the Naval Research Laboratory in Washington, D.C. Battams operates the NASA-funded Sungrazer Project, which uses space-based solar telescopes to look for comets flying close to the Sun.

Why are objects from outside our solar system so important to study? What can we learn about the cosmos and our own origins by studying them?

I think what it boils down to is that one of the big questions we have in all of astronomy, or even beyond astronomy, is, “Are we alone?” Is our solar system and our planet completely unique? Is there something about us that's completely different from the rest of our galaxy and the universe? It's really an impossible question to fully answer, but what's nice about an interstellar object is we can see how similar or dissimilar it is to objects in our own solar system. If it turns out that this comet is like a typical comet that we see in our own solar system, then we’ll think, "Well, okay. Maybe we're not so unique in composition." Or maybe it's going to have some truly bizarre chemistry and we'll say, "Wow! Things are wild out there!"

This object definitely appears to be a comet, whereas 'Oumuamua had traits of both asteroids and comets. If this is truly our first interstellar comet, how big of a deal will that be for astronomers? What sort of things will we try to learn from it, and how?

The nice thing about comets is that they’re active. The reason comets have the diffuse coma around them and the tail trailing behind them is because sunlight is hitting all of the volatile materials on the surface and basically causing them to vaporize. As they lift away from the surface, they bring other material up as well. In other words, you're boiling the surface away.

Whereas an asteroid is an inert rock, and all you can do is look at how light is reflecting off of it, with a comet there are a lot of chemical processes that are going on. It's a lot more complex, so you get to understand a little bit more of the gases and dust being released from the comet, and hopefully get a much better idea of its composition.

Also, comets are slightly easier targets to see. 'Oumuamua was very small, faint and stellar in appearance, whereas this comet, for people with a half-decent telescope, is going to be easier to see—though still not bright by any means!

"The Comet" is a short film created using images from the Rosetta spacecraft's mission to comet Churyumov-Gerasimenko. Learn more here.

I suspect that the name might actually end up changing a little bit once it’s officially classified as interstellar, but the C designation in its current name is the standard designation for a comet. The 2019 is fairly obvious—it’s the year. The letter and the number is just a sequential label that gets applied. The very first comet of the year is A1, the next one is A2, and then every half-month they go to the next letter of the alphabet. Borisov is the name of the discoverer of the object, Gennady Borisov.

Will the comet come close to Earth? And will we be able to see it without a telescope?

I believe current predictions are for magnitude 16-ish, maybe 17, which definitely requires a decent telescope and some expertise, but it's by no means out of the realm for a lot of amateur astronomers to view it, as well as the professional telescopes. 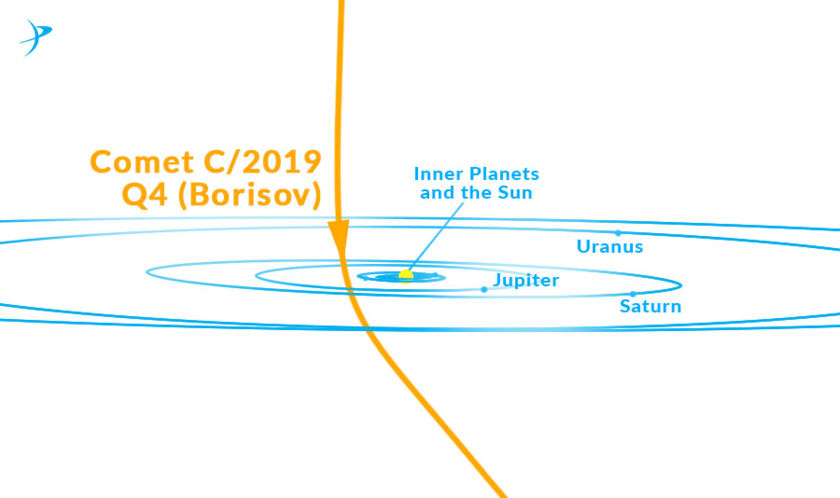 This chart shows the path of C/2019 Q4 (Borisov) will take as it travels through our solar system.

Are the comet and ‘Oumuamua related or from the same place? Assuming it is interstellar, do we know where the comet is heading after it passes through our solar system?

No, it’s absolutely not related to ‘Oumuamua. The comet’s orbit is still being fine-tuned, and that's why people are still being a little bit hesitant about saying it’s definitely interstellar. That's partly because we're still trying to narrow down the specifics of the orbit. It will be another couple of weeks before we're there.

But we know, generally, the direction that the comet came from in interstellar space, and we know, generally, the direction it's going to go to, and neither of those directions have anything in common with where ‘Oumuamua came from or went to. They are completely different objects with completely different orbits, and there is absolutely zero relationship between them.

How do we know objects like 'Oumuamua, and possibly this comet, are interstellar? How critical of a role do amateur asteroid hunters play in determining whether an object has interstellar origins?

Basically, every comet we've discovered until now is, in some way, shape or form, gravitationally bound to our sun and our solar system. They come in towards the sun, curve around and go back out, but you can tell that they are gravitationally bound to our solar system. Interstellar objects follow an orbit that is still influenced by the gravity of our Sun, but is not bound by it, and these objects can comfortably escape our solar system and head back out into interstellar space. Also, this comet is moving much faster than a comet would if it was bound to our Sun—so its velocity is another strong clue that we’re dealing with something interstellar.

As for the role that the amateurs play, the ones that can produce very high quality observations are certainly really crucial. In terms of determining the orbit for objects like this, it's not so much about getting more observations right this second, but getting observations in, say, a week or two from now. That really allows us to get a better handle on the path that it's following through space. Also, when an object like this is discovered, a lot of amateur astronomers will go back and look at sky surveys that took data months or even years ago, because sometimes things like this get overlooked.