With Comet Interceptor, ESA plans to meet a comet on its first trip into the inner solar system. The mission was selected Wednesday after a fast-track proposal process and will be developed on a rapid (for ESA) timeline, with a launch planned for 2028. Congratulations to the Comet Interceptor team on their selection! 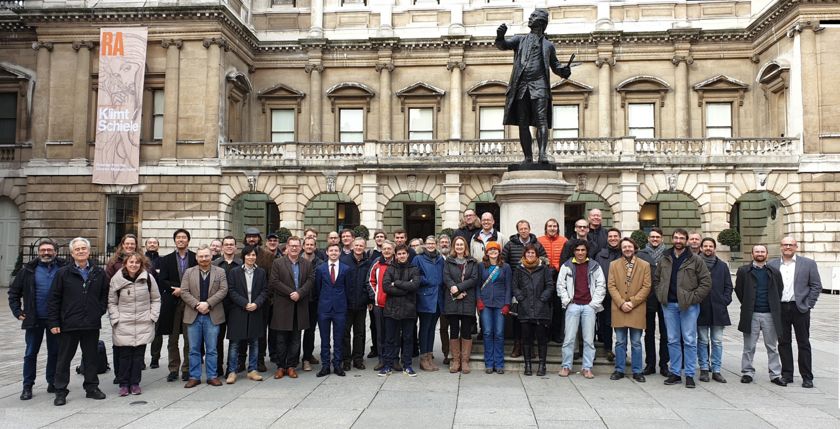 A team of primarily European with Japanese scientists and engineers assembled on 16 January 2019 at the Royal Astronomical Society to develop plans for ESA's Comet Interceptor mission.

Comet Interceptor will fill a gap in the in-situ study of comets. All previous comet encounter missions have visited short-period comets, which have relatively quick orbits (with periods of less than 200 years) and have traveled into the inner solar system many times. As a result of their repeat close passes by the Sun, short-period comet nuclei are baked, blackened, and decayed remnants of their original icy selves. In contrast, NASA’s New Horizons recently visited a pristine icy world of the Kuiper belt, the object named 2014 MU69, which has never traveled closer to the Sun than its current position. Comet Interceptor hopes to get our first look at a long-period comet: a body that formed even farther away than MU69, in the Oort cloud, that is making its first pass into the inner solar system and actively undergoing transformation from a frozen world into a spectacular comet.

The challenge for intercepting a long-period comet is that we don’t usually have a lot of time between our discovery of them and their arrival in the inner solar system. Typically, we first observe these worlds months or, at most, a few years before their arrival, not enough time to develop and launch a spacecraft. Comet Interceptor will solve that problem by launching before a target is discovered. It will piggyback to space aboard the same rocket that launches ESA’s exoplanet-survey spacecraft Ariel, an event nominally planned for 2028. (Comet Interceptor would be delayed by any Ariel launch delays, but its mission would not be harmed by such delays.) Following Ariel, Comet Interceptor will travel to the Earth-Sun L2 point, where it will await the discovery of a new long-period comet. 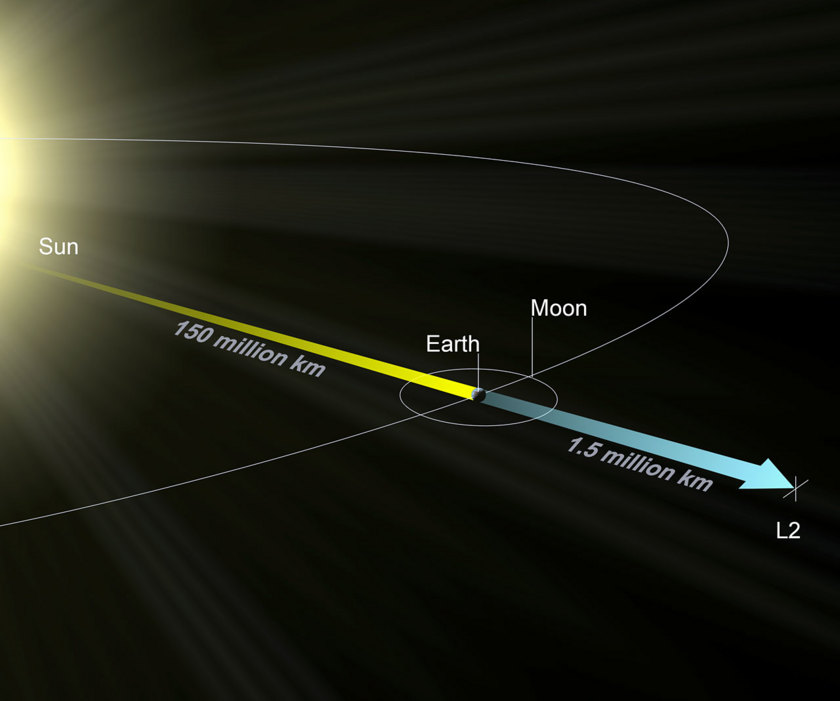 The Sun-Earth Second Lagrangian point, or L2, is one of five places orbiting spacecraft can remain stable relative to the Sun and Earth.

The new Large Synoptic Survey Telescope, which hopes to achieve first light next year, will help out with the discovery of suitable targets. (Tangentially, the LSST may soon be renamed for Vera Rubin.) Once a suitable target is discovered — which the team expects will happen within 2 or 3 years of launch — Comet Interceptor will move to fly past the new comet. A few weeks before the flyby, the spacecraft will release two small sub-spacecraft. The main craft will pass between the Sun and the comet, avoiding the major dust hazard, doing remote sensing, and acting as a communications relay.  The two small craft — one of which will be built by ESA, the other by JAXA — will travel much closer. The ESA contribution will carry a mass spectrometer into the comet’s dusty coma, and all three spacecraft will have plasma instruments to characterize the comet’s fields and particles environment in three dimensions.

The executive summary of the Comet Interceptor proposal (appropriately) doesn’t mention an extended mission, but the main craft would very likely be able to go on to do at least distant studies of other worlds after the main comet encounter ends, particularly if the mission is able to go forward with a solar-electric propulsion system. 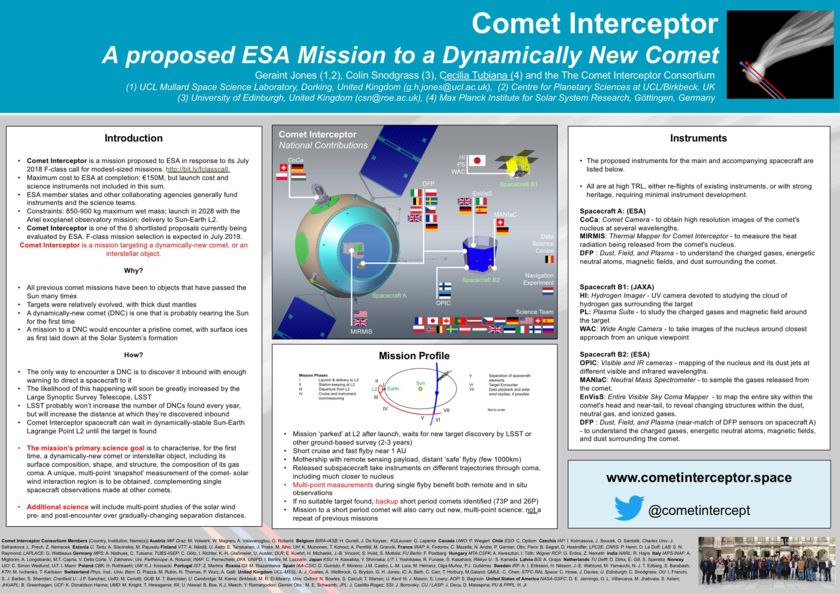 Presented at the European Geophysical Union General Assembly in Vienna, Austria, on 12 April 2019.

I had a similar idea a few years ago. Although my idea was to keep a launch vehicle on alert. We can do it with nukes, why not a science payload?

This general concept was looked at in the early 90's under a Discovery study by Mike Belton, but the discovery time then for new long-period comets was too close to perihelion to enable a mission even if a spacecraft was available. New telescope technology makes a diifference!