Planetary Defense in the Moroccan Mountains

A little-known observatory is helping usher an Arab astronomy renaissance

In 2013, astrophysicist Nidhal Guessoum wrote a paper in Nature calling for an Arab astronomy renaissance. He noted the rich history of Islamic astronomy, which had a golden age from the ninth to sixteenth century CE. Great observatories in Baghdad, Damascus, Maragheh, Samarqand and Istanbul once mapped the sky. Palaces kept resident astronomers. Mosques employed timekeepers. And as a result, many stars and constellations bear Arabic names: Altair, Deneb, Vega, and Rigel.

Unfortunately, that rich history has largely been lost.

"Today, Arab astronomy barely registers on the map," Guessoum wrote. "Most Arab nations are generating fewer than ten papers in the field each year, and these are hardly cited."

A good start, he said, would be to establish astronomy programs at all public universities, and build new observatories. The Arab world has many mountainous regions well-suited to astronomical observing, and funding shouldn't be a problem—at least for the wealthier Gulf states.

In the heart of Morocco's High Atlas Mountains, which form the western boundary of Africa's Sahara Desert, a little-known observatory is answering Guessoum's call to revive Arab astronomy. One telescope there is scanning the skies for potentially hazardous near-Earth asteroids. The Planetary Society, through our Shoemaker NEO grant program, is helping to upgrade that telescope's capabilities—our first-ever grant for such a project on the African continent. 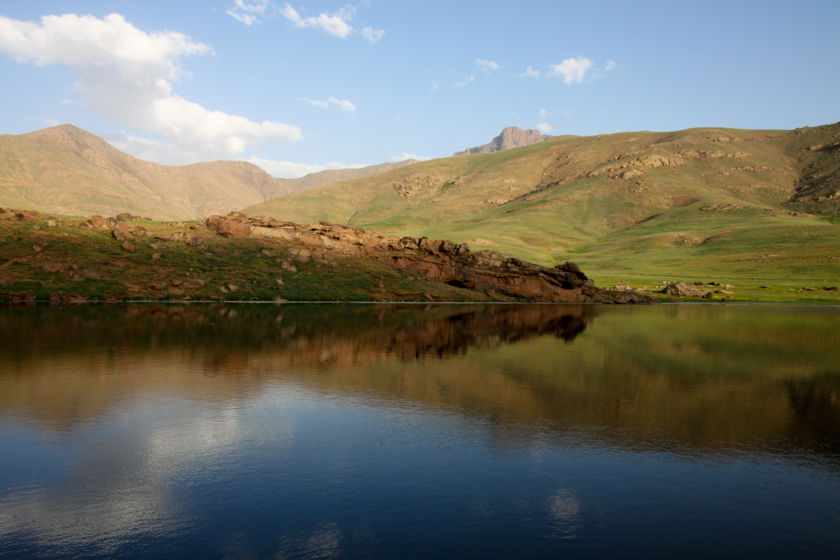 The scenery near Oukaïmeden, in Morocco.

Morocco is Africa's most northwestern country. It borders the Atlantic Ocean and Mediterranean Sea, and is separated from Spain by just 14 kilometers across the Gibraltar Strait. The country's population is mostly Arab and Imazighen, the indigenous people of North Africa.

Morroco's coastal regions have hot, dry summers and mild, wet winters, but farther inland, high-elevation areas receive snowfall. That includes the High Atlas mountains, which are the last major geographical stop before the land gives way to the Sahara. Nestled in the High Atlas is a small village named Oukaïmeden (pronounced ooo-kay-yem-eh-den). The altitude there is 2,650 meters (8,700 feet), and it has clear skies around 250 nights per year.

In 1986, a group of Moroccan astronomers formed a research group at the National Center of Scientific Research in Rabat, which is Morocco's capital. Their early work focused on solar research, and from 1990 to 2001, they participated in an international project to observe the Sun for an entire 11-year solar cycle. They installed their solar research station at Oukaïmeden, and the quality of data they collected showed the location's observing conditions rivaled world-renowned astronomical facilities like La Silla Observatory in Chile. In 2007, Cadi Ayyad University, located at the nearby city of Marrakech, built a permanent research station there, christening it Oukaïmeden Observatory.

Zouhair Benkhaldoun, the director of Oukaïmeden at Cadi Ayyad, told me via email that the observatory is home to five telescopes and 24 researchers, 15 of which are Ph.D. students. His budget is just 20,000 Euros per year; everything else is financed through research contracts. The observatory's biggest scientific contribution to date is arguably the discovery of the TRAPPIST-1 exoplanet system, thanks to a telescope the TRAPPIST project installed in 2016. Oukaïmeden is also home to a Korean satellite tracking telescope, and, since 2011, an asteroid-hunting sky survey. 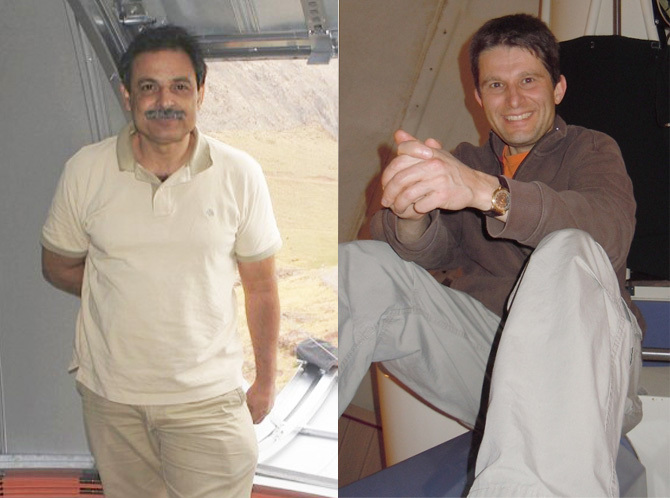 Michel Ory is a high school physics teacher in Porrentruy, Switzerland. He's also an amateur astronomer and asteroid hunter. In 1999, with colleagues at the Jura Society of Astronomy in Switzerland, he helped build Jura Observatory, which has a 0.6-meter telescope. Since then, Ory estimates he has spent more than 1,000 nights observing, usually for 4 or 5 hours each night.

"You can make the multiplication," he wrote in an email. "And all without receiving any money for that job. I'm very proud about that."

At Jura, Ory has discovered more than 200 new asteroids, one comet, and two supernovas. The only drawback? The observatory gets just 70 clear nights per year.

"If I wanted to discover more asteroids, I knew I would have to change the site and go to another observatory," he said.

Ory had frequently visited Morocco, and in 2005, he met up with the country's professional and amateur astronomy communities. He learned about the plans for Oukaïmeden Observatory, and realized it could be an ideal place to expand Jura's hunt for asteroids. A partnership was soon brokered between Cadi Ayyad, which provided a building, Jura, which built a dome, and the French astronomer Claudine Rinner, who donated a 0.5-meter telescope. Together, they formed MOSS, the Morocco Oukaïmeden Sky Survey, with the goal to survey small bodies in our solar system.

MOSS went online in 2011. It is remotely operated by Ory, in Switzerland, and Rinner, in France. Ory said that as of late May, MOSS has discovered 4 comets and 5 asteroids, and sent more than 1 million small body observations to the Minor Planet Center, a NASA-funded clearinghouse for small solar system objects. 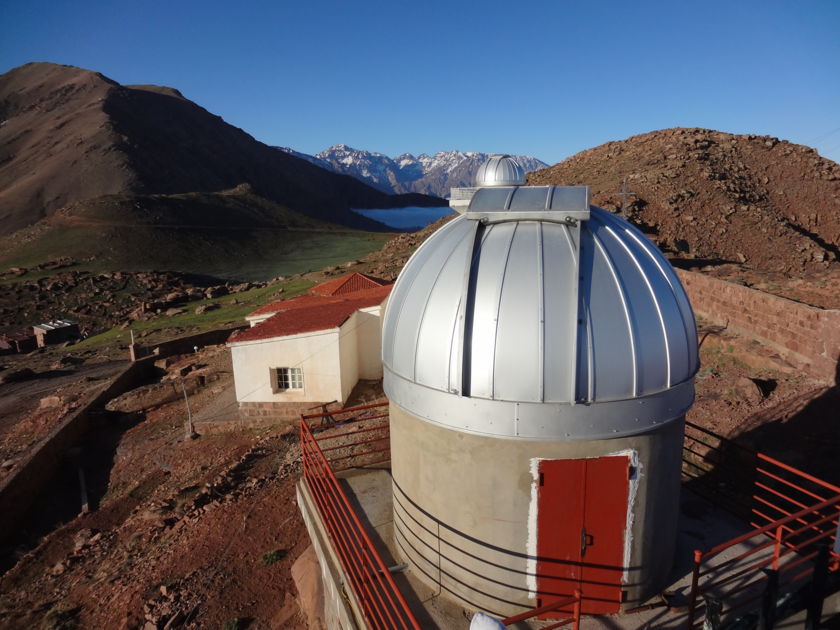 A view of Oukaïmeden Observatory, with the Morocco Oukaïmeden Sky Survey (MOSS) dome in the foreground.

The Planetary Society's Shoemaker NEO Grant program funds advanced amateur astronomers who find, track and characterize near-Earth asteroids. It takes multiple observations of NEOs to refine their trajectory and predict whether they might hit Earth, as well as learn their basic characteristics. There aren't enough professionals out there to cover the sky, so amateurs help by submitting observations to the Minor Planet Center.

In 2017, Ory submitted a Shoemaker grant proposal to upgrade the MOSS telescope's CCD camera to a newer model able to detect objects as faint as magnitude 21.5. Earlier this year, The Planetary Society announced it had awarded $59,300 in grants to seven winning proposals. Among the winners was Ory, who has already purchased and installed his new CCD camera at Oukaïmeden.

"We hope to pick up a new NEO or comet in the following weeks or months," he wrote earlier this month.

Projects like MOSS contribute to the larger effort to expand Oukaïmeden Observatory's profile. Benkhaldoun, the director, said the observatory's next big project is building a 2-meter telescope that can be operated remotely.

"We are in lobbying phase for this project, and we plan to organize an important workshop on this subject on Fall 2019," he said.

Meanwhile, an international coalition is trying to create an 160-kilometer-wide "dark sky reserve" centered on Oukaïmeden—the first such reserve in North Africa and the largest worldwide. Cadi Ayyad University is hosting a workshop on the topic later this year.

Has Oukaïmeden helped start an Arab astronomy renaissance? In Morocco's case, yes. A May 2018 paper for Nature Astronomy, written by Benkhaldoun, shows the number of peer-reviewed Moroccan astronomy papers has been increasing steadily. Less than five per year were published prior to 1992; in 2017, the number reached an all-time high of 30.

And ultimately, that's good news for ushering in a new generation of Arab astronomers.

"(Observatories) play an important role by training young scientists in astronomy and physics," Benkhaldoun wrote in his Nature Astronomy paper. "Moreover, such observatories make important contributions to science education and the development of outreach activities."

That is a wonderful story and a great bit of new news! Expansion in the NEO field of this size is a great start! Hopefully others will join the field on the continent.