In May 2016, Michael Gillon and his team announced the discovery of three Earth-sized exoplanets around TRAPPIST-1, an ultra cool M-dwarf star, using the small TRAPPIST telescope at ESO-La Silla, Chile. It was an exciting discovery—yet on that day no one could possibly have imagined that less than a year later they would make another significant discovery involving the same system. But here we are: today, they announced in Nature the discovery of seven potentially habitable Earth-like worlds. 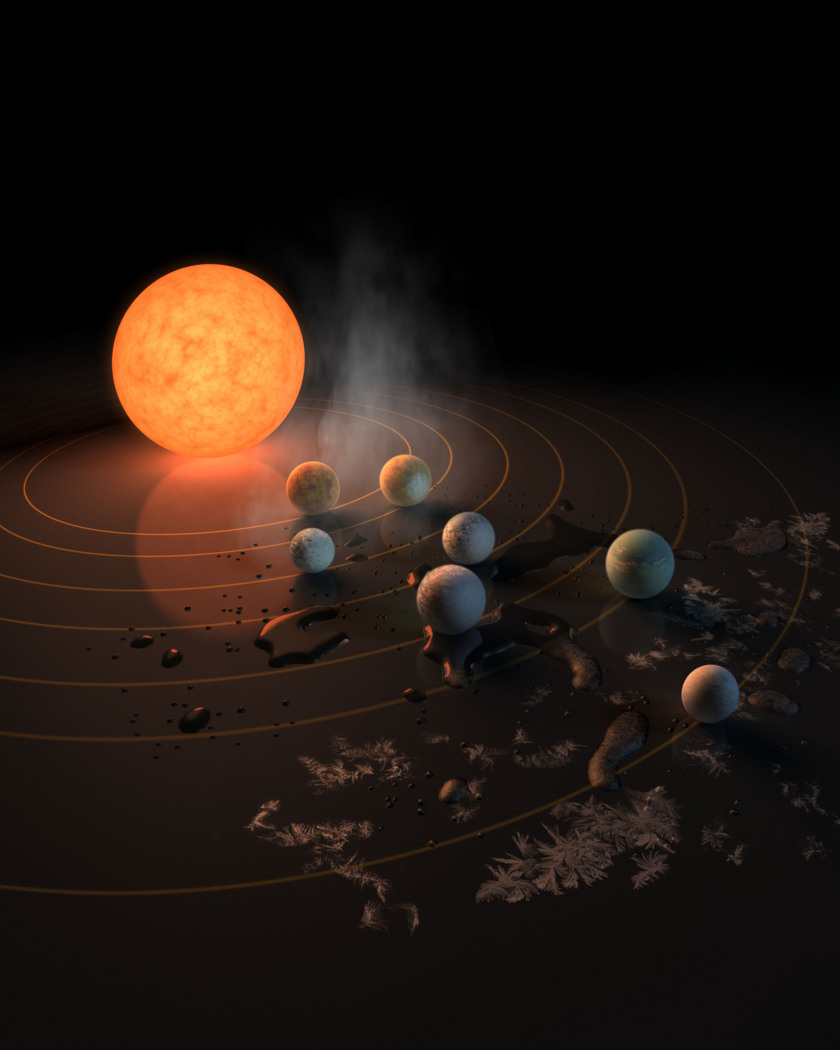 This representation of the Trappist-1 system shows which planets could harbor liquid water. The inner three planets are likely too hot, and the outer planet is probably too cold, but the middle three planets might be just right.

The star, named TRAPPIST-1, is a fairly inconspicuous star in our Milky Way. Small (8% the mass of the sun) and cold (half the temperature of the sun), it is a member of an ultra-cool dwarf population that represents 15% of the star population of our galaxy. In 2016, Gillon and his team detected the transit (i.e., the shadow of a planet passing between its host star and us) of three exoplanets at the inner edge of the habitable zone of their star.

Energized and excited by this discovery, the team requested and received additional telescope time to follow up on this system during the second half of 2016. The NASA Spitzer telescope is one of the facilities they selected for an ambitious program that called for monitoring the TRAPPIST-1 system almost continuously for twenty days. Spitzer and other ground-based telescopes allowed the team to detect thirty-four transits, more than they had anticipated, suggesting the existence of additional exoplanets in the system.

After an careful analysis, the data revealed the presence of seven Earth-sized exoplanets (named TRAPPIST 1b, c, d, e, f, g, and h) in orbit around this M-type star. Because their orbital periods are short (less than twelve days for planets b to g), several transits were detected during the campaign. Accurately measurements of those tiny events (0.6% dimming of the star) provide a wealth of information about the planets’ orbits, sizes, and even masses by measuring precisely the timings of the transits which are perturbed by the gravity of other planets. 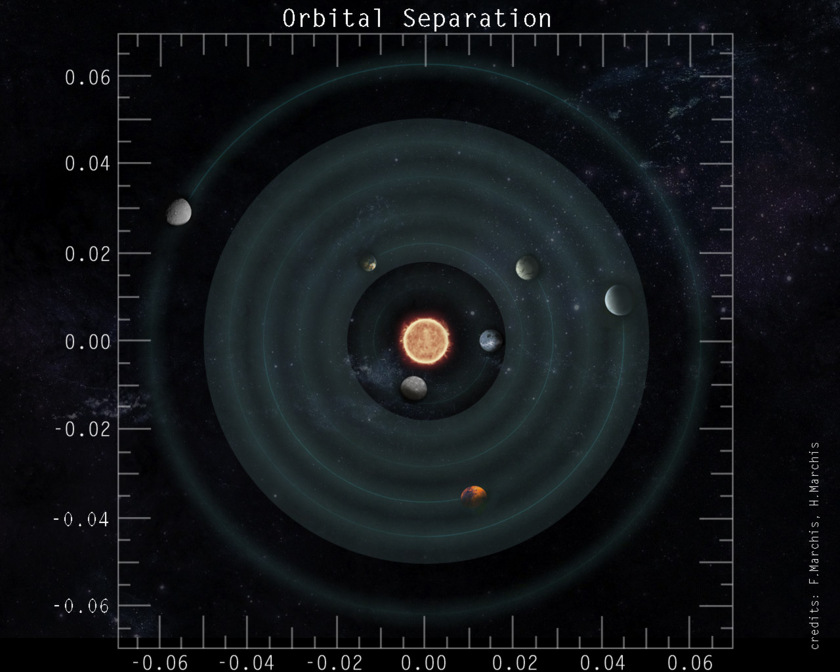 Top view of the Trappist-1 planetary system showing the circular orbits of the seven Earth-like exoplanets. The red dwarf is not to scale. The green area corresponds to the habitable zone of the star where liquid water could exist on the surface of those worlds.

So what have we learned about the TRAPPIST-1 system? 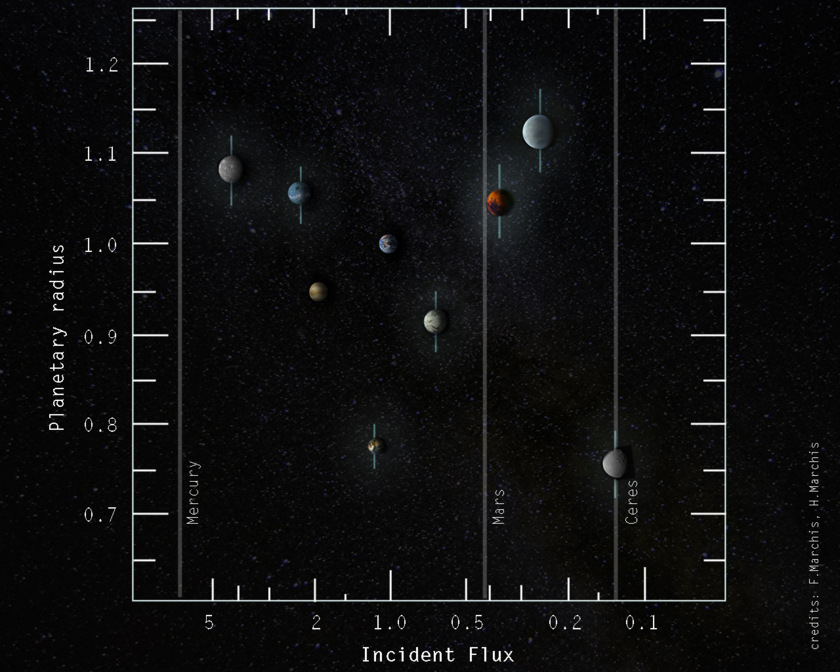 Incident flux received by the exoplanets of Trappist-1, and their radiuses. For comparison, the incident flux of Mercury, Mars and Ceres, as well as the locations of Venus and Mars are added. Trappist-1d receives the same amount energy as Earth.

What can’t we say about the TRAPPIST-1 system? 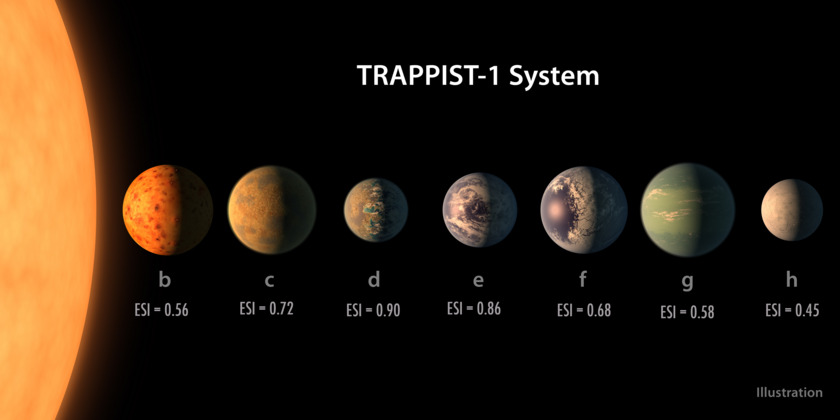 Artist's representation of the Trappist-1 system with the exoplanets at scale between each other and the host red dwarf star. The ESI (Earth Similarity Indice) calculated by Abel Mendez (PHL) for each exoplanet is added. For comparison with our solar system planets, Earth's ESI is 1, Venus's ESI is 0.44, and Mars's ESI is 0.64. Caution: the ESI is not a direct measure of habitability but formally a fuzzy comparison, using a distance metric, between a selected set of planetary properties of a planet and Earth. See http://phl.upr.edu/projects/earth-similarity-index-esi for more information.

Last year, astronomers announced the discovery of a potentially terrestrial planet around Proxima Centauri, located only 4.2 light-years away from us. Today, this group reveals the existence of seven potentially habitable worlds around a small star that could live forever. The field of exoplanet is without doubt booming, and it is not over.

A team led by Emmanuel Jehin, co-author of the paper, is currently building Speculoos, a TRAPPIST telescope “on steroids”, made of four, 1-meter robotic telescopes installed at Cerro Paranal. With this telescope, the team will survey 10 times more red dwarfs than TRAPPIST did. So we could expect the discovery of a dozen systems similar to this one soon. We will have the opportunity to explore the diversity of atmospheres and climates on Earth-like worlds, and potentially life out there.

The discovery of these strange new worlds where life could flourish is the beginning of an exciting time for astronomers and biologists. A time when we are beginning to see the unimaginable, a time when life as we don’t know it can be imaged and studied. We will probably need to build complex and expensive instruments to understand those worlds—but what an astonishing, awe-inspiring, life-changing prize to win, don’t you think?

This discovery supports Alan Stern's contention that the current IAU definition of a planet is flawed. "Now, they are so close to each other that their gravitational fields interact, nudging one another in ways that enabled the team to estimate each planet's mass..." would not, I think meet that definition. See this essay from 2000: http://users.tpg.com.au/horsts/microplanet.html

With such large planets so near each other, is this system stable into the foreseeable future? Has anyone simulated their orbits?

This is amazing. God told us this 1400 years ago in his last revelation, Qur'an. It is Allah Who has created seven heavens and of the earth the like thereof (i.e. seven). His Command descends between them (heavens and earth), that you may know that Allah has power over all things, and that Allah surrounds (comprehends) all things in (His) Knowledge. Qur'an 65:12

Oh for cthulu's sake god did not tell us any such thing.

I am very glad that scientists are now cruising along the edge of our knowledge. This is a magnificent discovery. Good luck for the team who discovered this system. The world is so big!

Seven! The FSM said seven once. He was telling us all about this all along! Serially though this is such a neat discovery. What will be next!?

Leave your religion out of this!! Fictional gods did not say anything. The men who wrote your religios books didn't know where the sun went at night let alone about anything in the universe. IN SCIENCE WE TRUST! ♡ Nasa!

The blog mentions "TRAPPIST-1 is located twenty-nine light-years from us". Most other sources are reporting 39 light-years (or 12 parsecs). I assume the 29 is a typo?

I am proud of scientific community contributing our understanding of earth and universe. I am fed up with the notion that god told us most scientific facts years ago. I am sure that prophets did know nothing about the physics and physical rules. We trust science.

Thanks, B.J., for noticing -- corrected.

The article overstates our knowledge of the density of the planets. > Those are rocky worlds that range in > density from 60 and 117% that of Earth. If you look carefully at Figure 2a of the Nature paper, or Table 1, you'll see that the uncertainties in the inferred densities (due to the large uncertainty in masses) means that 4 of the 6 have densities consistent with 50% water, and 2 or 3 have densities (barely) consistent with 100% water.

“Small (8% the mass of the sun) and cold (half the temperature of the sun), it is a member of an ultra-cool dwarf population that represents 15% of the star population of our galaxy.” If Trappist-1 is a class M dwarf then last I checked they are believed to represent around 75% of the stars of the Milky Way, not a mere 15%! I would also point out that planets orbiting inside the habitable zones of class M dwarfs are orbiting closer to their star than Mercury is to our own Sun, and there is therefore a good chance they will be tidally locked, which would not exactly be good for finding liquid water on their surfaces.

I am very glad that scientists are now cruising along the edge of our knowledge. This is a magnificent discovery. Good luck for the team who discovered this system. The world is so big! thanksssssss

Stephen: Ultra cool dwarf stars are a sub-category of the spectral Class M. They represent 15% of the astronomical objects in our galaxy. About the issue of having the planets tidally locked, this is discussed in the paper. "Using a 1D cloud-free climate model accounting for the low- temperature spectrum of the host star, we infer that the three planets e, f, and g could harbour water oceans on their surfaces, assuming Earth-like atmospheres. The same inference is obtained when running a 3D climate model assuming that the planets are tidally synchronous. For the three inner planets (b,c,d), our 3D climate modeling results in runaway greenhouses. Michael Richmond: It is correct that the error bars imply that b,f,e,d could be made of 100% of water, however it is difficult to envision Ice giant planets surviving 1Byrs in close orbit around a flare star. Those are probably rocky planets and we will know more about them by studying their atmospheres in spectroscopy.