NASA's newest planetary science mission is a quadcopter that will fly around the surface of Saturn’s moon Titan, the agency announced today. Sporting 8 rotors and a nuclear power source like the Mars Curiosity rover, Dragonfly will launch in 2026 and arrive at Titan in 2034. The mission will build on key discoveries made by Cassini, which saw its 13-year mission at Saturn end in 2017. 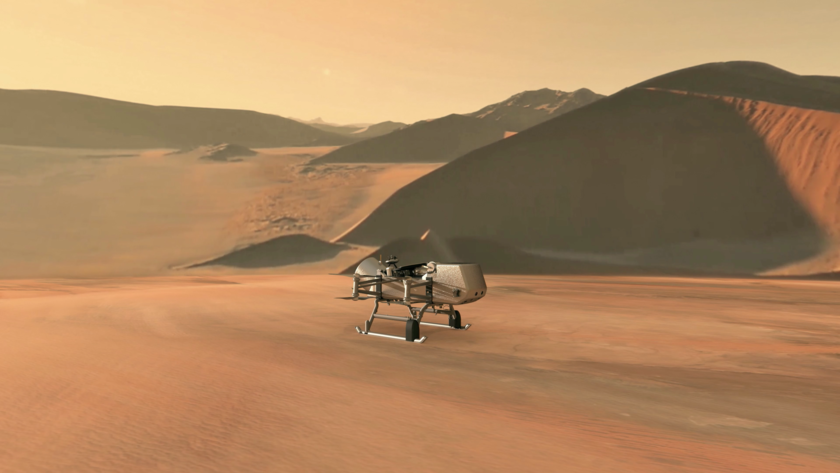 "All of us in The Planetary Society are excited about NASA's selection of Dragonfly as the next mission in the agency's New Frontiers Program," said Jim Bell, president of The Planetary Society board of directors and a planetary scientist at Arizona State University. "Titan is one of the most interesting and enigmatic worlds in the solar system, and its surface, atmosphere, and interior could tell us much about the origin and evolution of potentially habitable planets—including the early Earth. The data from the first drone to explore the outer solar system should lead to many new scientific discoveries, and the photos of Titan's exotic landscape promise to be spectacular!"

Dragonfly will cover more than 175 kilometers during its 2.7-year mission, initially landing at Titan’s vast Shangri-La dune fields, the same region where ESA’s Huygens probe landed in 2005. The 3-meter-long probe will touch down almost precisely one Saturn year after Huygens’ historic descent, meaning that Huygens’ experience provides a direct test of the environment through which Dragonfly will enter.

The spacecraft will visit new locations using increasingly longer flights, building up to 8-kilometer trips during which it will scan the surface with science instruments and collect samples for analysis. Its lifetime is theoretically limited only by the decay of its plutonium power supply; it could last 8 Earth years.

The selection of Dragonfly means that CAESAR, the other New Frontiers mission finalist which would have returned a sample from comet 67P/Churyumov–Gerasimenko, was not been picked at this time. New Frontiers missions are proposed by scientists at research and academic institutions outside of NASA, and must adhere to a specific list of destinations derived in part by the planetary science community's 10-year Decadal Survey. Those destinations originally did not include Titan, but they did include comet sample return.

"NASA management added Titan as a potential mission destination just a few years ago, partly in response to scientific discoveries made by the Cassini mission and the Hubble Space Telescope after the release of the Decadal survey,” said Casey Dreier, chief advocate and senior space policy adviser at The Planetary Society. "Today’s selection suggests that NASA is embracing a faster process for reacting to new data and embracing riskier mission concepts."