Throwback Thursday Funpost! That time I created work for the ISS crew

We're back with another Throwback Thursday Funpost! Last week, I talked about Apollo astronauts spacewalking in deep space. This week is a two-for-one tale about something that first happened seven years ago, with a recent followup. Get hyped!

In 2011, Atlantis visited the International Space Station for the final time, during the shuttle program's final flight. The astronauts brought along a small American flag that flew on the very first shuttle flight in 1981, and they stuck it on the forward hatch of the station's Harmony module. Here's a picture of the hatch leading to Atlantis, with the flag attached. It's framed by patches from the first and last shuttle missions: 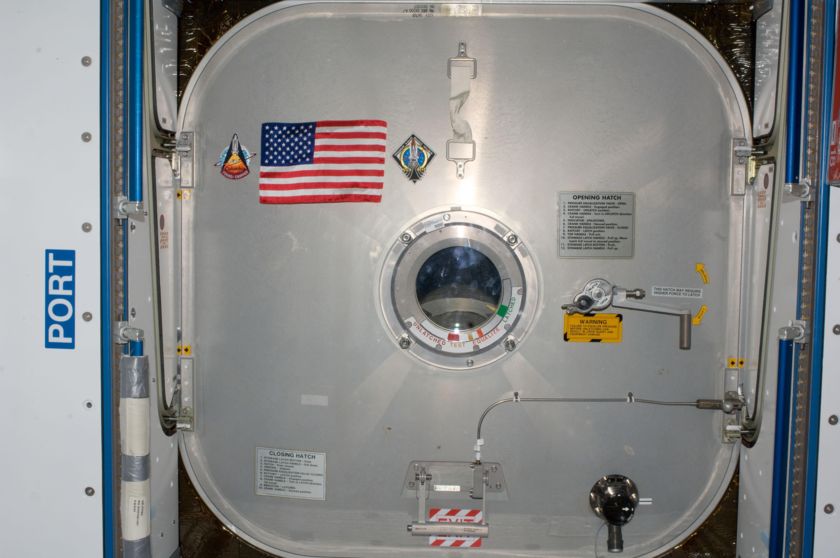 A flag flown on the first and last space shuttle missions was left on the inner hatch of the International Space Station's Harmony node, where it awaits the next crew of astronauts that arrive aboard an American spacecraft.

And just because this is an excuse to post it, here's a cool composite picture from a spacewalk during that mission, showing Atlantis docked to the above port: 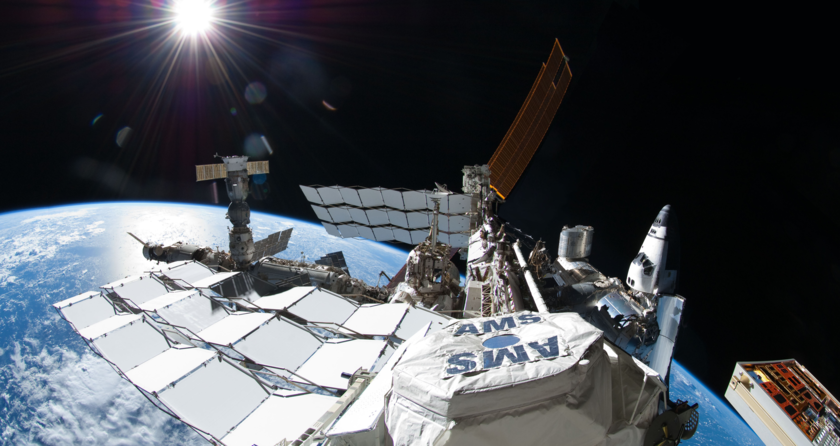 Panorama of Atlantis at the ISS in 2011

This panorama was created from individual images captured during a spacewalk.

The goal was to create a "capture the flag" incentive for private companies vying to send astronauts to the ISS. The first crew to reach the station gets to claim the flag and bring it home. President Obama described the concept (4:00) when he spoke to the crew during the mission.

It's a cool idea! Imagine you're SpaceX, and you get to the station before Boeing, and you get to bring that flag home and frame it on the factory floor in Hawthorne. "Oh, that flag?" I picture Gwynne Shotwell telling a visitor. "Yeah, John Young and Bob Crippen flew it to space on Columbia, and then the last shuttle crew left it aboard the ISS in 2011. Then, we flew a Crew Dragon up there, peeled the flag off the hatch and said EXCUSE ME, I THINK THIS BELONGS TO US."

I sort of forgot about the flag until I was helping Emily write our annual year-in-space preview story, and I realized there was a (slight) chance a crew could make it to the ISS in 2018. I was going to include a line about the flag, but first, I asked Dan Huot, a public affairs officer at Johnson Space Center, if it was still there.

Dan knew what I was talking about, and looked into the situation. He later told me the crew "apparently found several flags," and that he'd let me know when there was a definitive answer. I wasn't surprised it didn't immediately turn up; I mean, have you ever looked at pictures of the space station? It's crazy! There's stuff strapped to every bulkhead. They have an entire team at Marshall Space Flight Center that tries to keep track of everything (and another at JSC, I was told after posting this). That job is my nightmare, because I'm an organized person and I suspect being responsible for ISS junk would consume my brain until I saw floating wrenches when I closed my eyes.

In 2017, Google Street View introduced a virtual tour of the ISS, so I decided I would try looking for the flag myself. This is what the hatch in question looks like now: 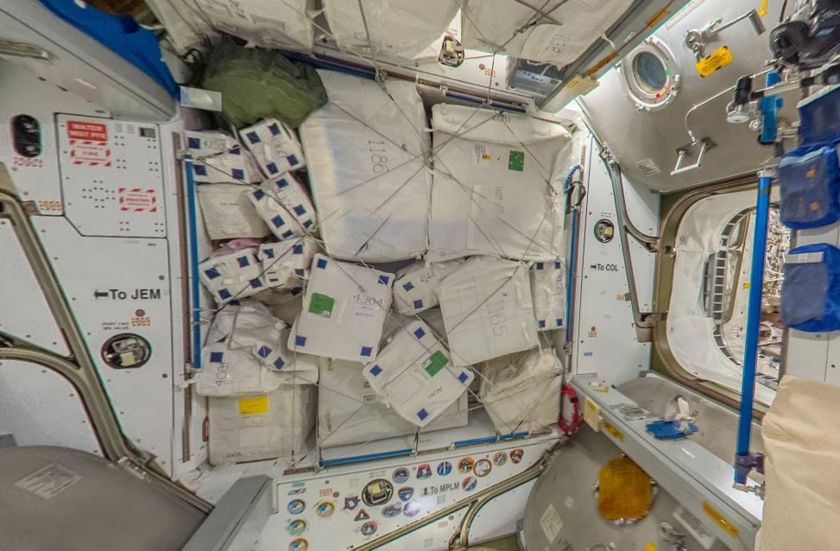 The front hatch of the Harmony module, covered with storage boxes.

Do you see what happened? Since the crew doesn't use that hatch, they apparently stored stuff there and secured it all with bungee cords. So much for that idea! Anyway, once again I forgot about the flag, until I received an email from Dan last week:

Hey Jason! Sorry for never following up on this but if it still helps, I can confirm the flag is still onboard. Took a bit of hunting but it is there.

Hooray! I hereby create the Helpful NASA Public Affairs Officer award and give it to Dan Huot. Now, do I feel bad about creating work for the ISS crew? Nah, someone else would have surely realized they needed to find the flag before the first commercial crew arrived. Hopefully there's now a line in some database at Marshall cross-referencing where the heck it is. Thanks, Dan, and thanks to the astronauts who did the searching in space!

Thx for your blogpost. quote: JD: " Imagine you're SpaceX, and you get to the station before Boeing, and you get to bring that flag home and frame it on the factory floor in Hawthorne. "Oh, that flag?" I picture Gwynne Shotwell telling a visitor. "Yeah, John Young and Bob Crippen flew it to space on Columbia, and then the last shuttle crew left it aboard the ISS in 2011. Then, we flew a Crew Dragon up there, peeled the flag off the hatch and said EXCUSE ME, I THINK THIS BELONGS TO US." I have more of an outsider's view on the subject, but think Mrs Shotwell, even more than her colleagues, is incredibly careful about not doing anything to irk Nasa or get into frontal opposition with OldSpace. At present, the competitor Boeing is scheduled to get astronauts on the ISS slightly ahead of SpaceX. Its easy to imagine some political pressures for this to be the case, although the fact is that both have been running neck & neck for years. Delays seem to get imposed to each due to user requirements that weren't initially apparent (I'd have to search an example that doesn't single out one or the other, so better not cite the ones I have in mind ;). Although a big SpX fan, I'd like this "little victory" to be handed out to Boeing, which avoids conflictual headlines and lets SpX quietly get on with its principle project ( BFR). which is hopefully starting out on atmospheric test flights in early 2019. As for flags, theoretically, BFR could bring back a flag from the Moon in 2021 but it really wouldn't be a good idea. Both SpX and Blue Origin are preparing for things and people that will be leaving Earth for ever. My own fantasy for ISS would be to bolt on a powerful ion thruster and at end of life, send it (with flag) to the site of a future space museum on a supersynchronous Earth orbit. Others have suggested bringing down the whole station as BFR "chomper" payloads, but that would be time-consuming. And the space museum would get more visitors on the very long term