Lately, your faithful Planetary Society editorial staff has been thinking about ways we can spice up our weekly content routine. We don't post much hard news, and tend to focus on longer, analysis-oriented stories. That gets a little tedious! I spent a lot of this week laboring over a Space Launch System piece that I feel is very important and interesting, but sometimes I need to come up for air and marvel at a pretty picture.

So, as a palate cleanser, Emily and I are going to experiment with some weekly funposts: I’ll try some #ThrowbackThursday stuff, and she’s going to bring you #MoonMonday, featuring awesome pics of moons from around the solar system. We don’t know how long we’ll stick to this routine, but we’ll give it a shot and see!

Last week, I posted a Twitter thread with some cool Apollo pictures, and folks seemed to like it. So I thought I’d start my #ThrowbackThursday series by focusing on one scene in particular from those images: an astronaut performing a spacewalk IN DEEP SPACE: 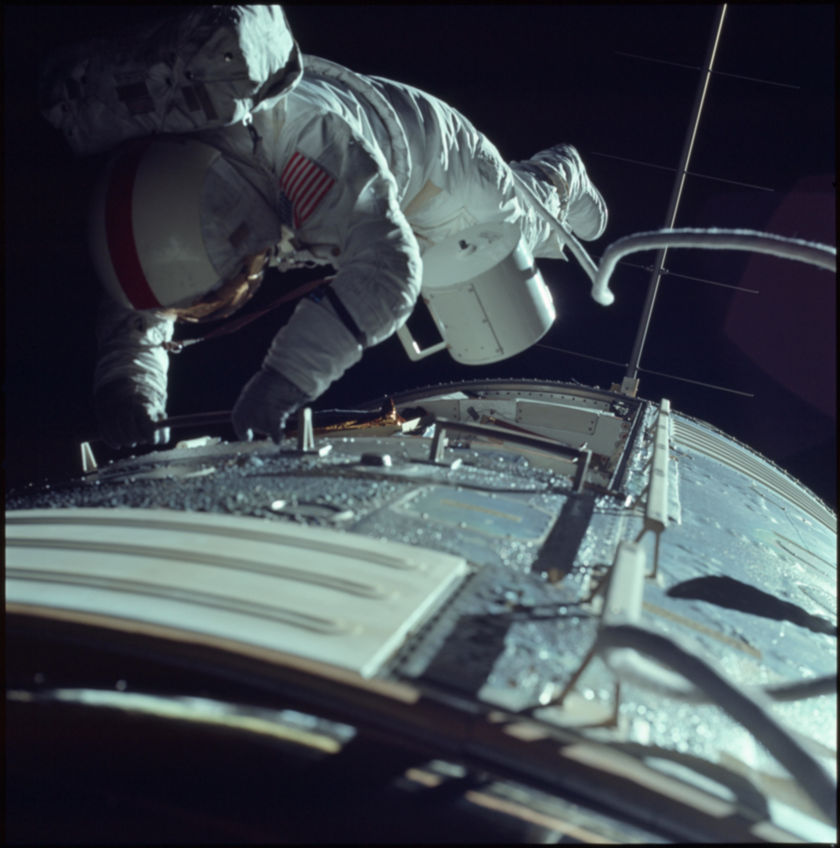 Apollo 17 command module pilot Ron Evans retrieves a cylinder of film from the exterior of the service module.

That's Apollo 17 command module pilot Ron Evans, on December 17, 1972. The crew was on the way home, coasting through the void between Earth and the Moon. During Apollo 15, 16 and 17, the service module was outfitted with external cameras for lunar observations, and the film for those cameras had to be retrieved via spacewalk, since the service module gets discarded shortly before atmospheric reentry.

The only way to do a spacewalk from the command module was to depressurize the entire capsule. So, during Apollo 17, Ron Evans, Gene Cernan and Harrison Schmitt all had to suit up while Evans ventured outside. The spacewalk was brief, lasting barely an hour.

From Evans’ vantage point on the service module, he would have been able to see the Moon in one direction and the Earth in the other, simply by turning his head. How trippy is that? Many astronauts get vertigo when they first step outside the International Space Station. I don’t know whether the absence of Earth makes that any better or not!

Speaking of Earth, you can see it as a crescent in this picture, peeping over Evans’ shoulder: 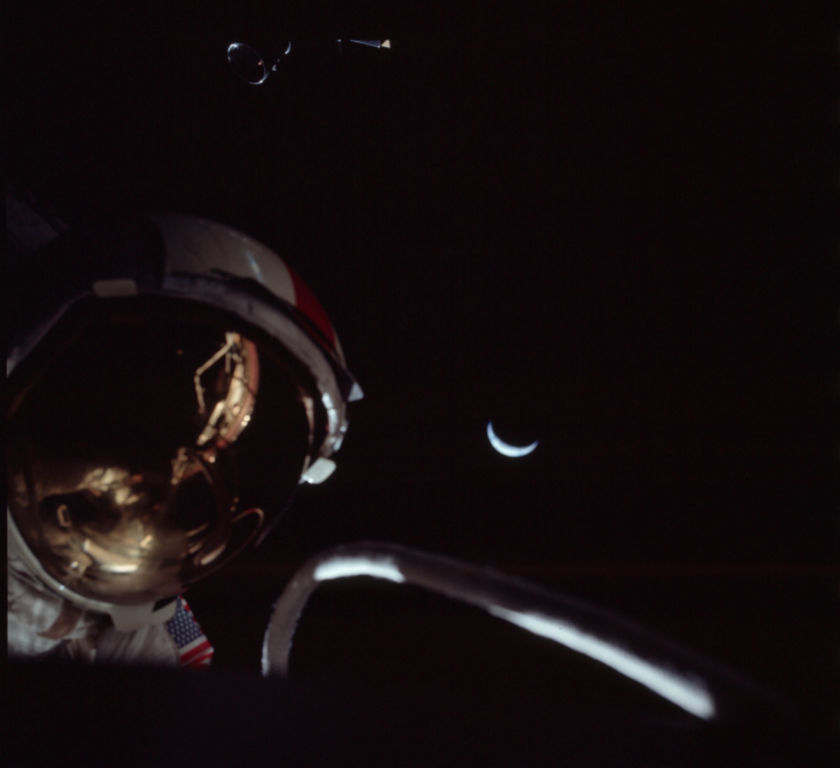 Ron Evans and a crescent Earth, as seen during an Apollo 17 deep space spacewalk in 1972.

And here’s a zoomed-in Earth picture from the same spacewalk: 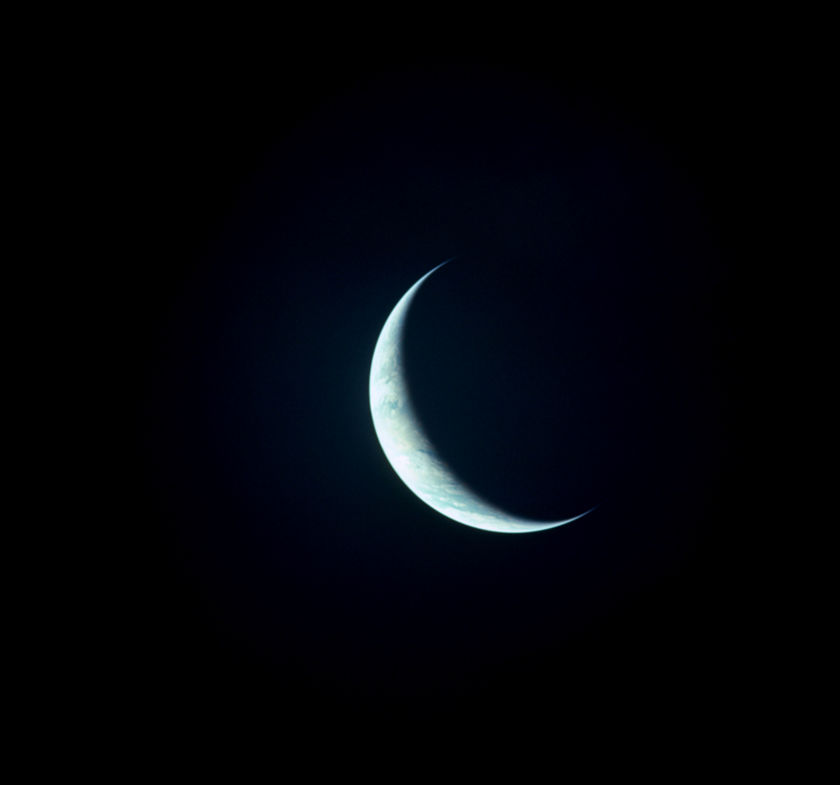 The Earth, as seen during a deep space spacewalk during Apollo 17.

I love that last photo because it’s similar to ones taken by planetary spacecraft. But in this case, an astronaut in the wilderness of cislunar space pressed the shutter release on an honest-to-goodness Hasselblad camera with color film, originally meant to be used by humans on Earth.

Evans died in 1990. As I was looking back through some of the Apollo 17 mission transcripts, I found this awesome exchange between him and Gene Cernan, right after the crew first reached Earth orbit. Cernan was asking Evans to remove some kind of optical cover, and Evans was completely distracted by the fact that he just got to space; Apollo 17 was his first and only spaceflight.

Cernan: Get that cover off.

Evans: I can't believe we've made it up here.

Evans: I don't know. I haven't done it yet [laughter].

Finally, I want to share a new resource for cool Apollo pics. I used to rely on the Project Apollo Archive on Flickr, but Lise Guerriero recently pointed me to another archive on Datastro. Thanks!

"-a consistent definition of "deep space" to avoid confusion." Oh, there is definitely confusion concerning space exploration. The first kind has to do with the satellite launch industry and Human Space Flight (HSF). The NewSpace crowd loves to conflate the two. Though there is some overlap due to launch vehicles that are "human-rated" used for satellites the problem is that NewSpace fans love to march under the banner of making "us" a multi-planet species or some such blather when what they are really promoting is a certain company launching satellites. Then there is the difference between HSF and scientific robot missions since there is a significant faction that considers HSF to be a waste of money. And there are those like me who consider space colonization (not on natural bodies) to be the priority due to the survival imperative. There is HSF Beyond Low Earth Orbit (HSF-BLEO) which would generally refer to humans in GEO on shielded platforms in GEO or elsewhere in orbit. And it might be wise to just stop referring to LEO as a place where humans fly "in space." It is not really space. There is HSF Beyond Earth Orbit (HSF-BEO) which would generally refer to humans in cislunar space between the Earth and the Moon or in Low Lunar Orbit (LLO). There is HSF Beyond Earth and Lunar Orbit (HSF-BELO) which would generally refer to humans in "deep space" on missions beyond the Earth-Moon system.

Thanks Jason, A nice trip down memory lane for me! Ignoring the politics, APOLLO was an adventurous program! As it developed, seeing the detailed artwork showing everything as it was going to be was very surreal. It seem so futuristic at some moments but when the flight tests, and Gemini expanding the knowledge gap with each flight, one could seen APOLLO was going to happen with an actual lunar landing. On the other hand we were GOING TO BEAT the Russians. What a time to be a participant in or a spectator of NASA, the CAN DO agency. Yes, that was their motto of the day, CAN DO! And they did! Starships are not far behind was the dream thanks to Star Trek which said mankind had a positive future! My definition of space between the galaxies is: intragalatic space. My definition of space between the stars is: galatic space. My definition of deep space is: any point outside the planetary system to the end of the heliosphere realm (which is variable). My definition of Interplanetary space is: within the boundary of the stellar orbiting natural bodies. Just my definitions, nothing more. : )

"#MoonMonday, featuring awesome pics of moons from around the solar system." I would really like to read #BodieswithOceans featuring moons and other bodies with possible subsurface oceans. Like Eris.....so, so, far away but with Dysnomia to provide tidal heating it might have life.

Great idea! I would love to see more of these weekly series, there are many days when I find myself constantly refreshing the blog page for new content, in vain.