And it's only 11 light-years away

Meet the new neighbor: an Earth-sized exoplanet just 11 light-years away that could potentially harbor life.

European scientists announced today the discovery of a world orbiting nearby star Ross 128. The planet, named Ross 128 b, has a predicted temperature range that could allow liquid water to exist on the surface. Ross 128 b is now the second-closest such world to Earth; only Proxima Centauri b, at 4.25 light years away, is closer.

Xavier Bonfils, the lead author of the paper announcing the discovery in the journal Astronomy & Astrophysics, told me via email Ross 128 b has a mass about 1.35 times that of Earth.

"We are thus confident that Ross 128 b is a rocky planet," he said. Unlike Proxima Centauri, Ross 128 is said to be "quiet," meaning it spews out comparatively less radiation that could harm life as we know it.

As if this news wasn't interesting enough, there's also a SETI (search for extraterrestrial intelligence) angle to the story. Earlier this year, Ross 128 made headlines because it appeared to be sending out a semi-repeating radio signal. The signal was later explained to likely be a geostationary satellite in Earth orbit, but today's announcement puts Ross 128 back in play as a star system potentially capable of hosting life. The newly found exoplanet will soon be the target of many future observations—including SETI searches.

"We are considering additional follow-up in light of the new discovery at radio and optical wavelengths," said Andrew Siemion, the director of the SETI Research Center at the University of California, Berkeley, in an email. "Nearby exoplanets are particularly exciting from a SETI perspective, as they permit us to search for and potentially detect much weaker signals than from more distant targets." 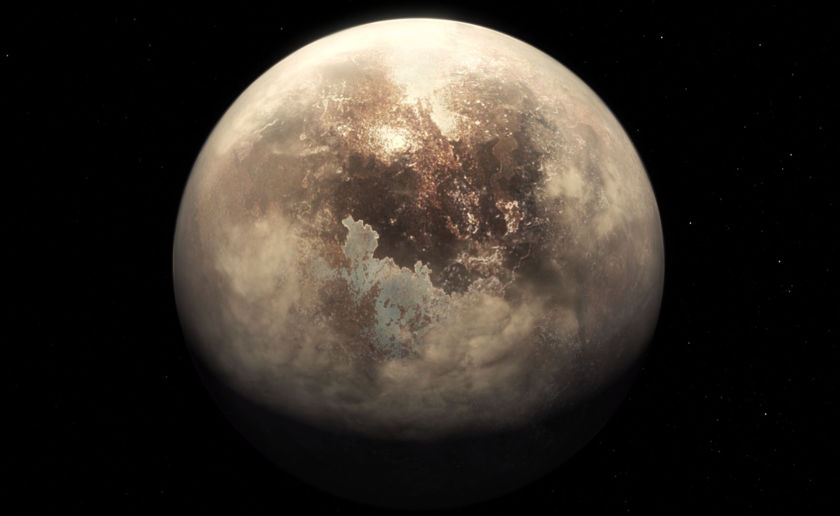 An artist's concept of exoplanet Ross 128 b.

The big question: Is Ross 128 b habitable?

A star's habitable zone is the region where liquid water can exist on a planet's surface. Depending on the star's temperature, this region changes. In our own solar system, it's the area roughly between the orbits of Venus and Mars. But for cooler stars, even a close-orbiting planet could harbor water.

Ross 128 b falls into this scenario. The parent star is a red dwarf, meaning it's low in mass and barely half the Sun's temperature. Ross 128 b is 20 times closer to its star than Earth, taking a mere 9.9 days to complete one orbit. But the star's low temperature should give the planet a temperature between -60 and 20 degrees Celsius (-76 to 68 degrees Fahrenheit). That plausibly puts it in the habitable zone, but scientists can't yet pin down its vital signs with certainty.

Just being in the habitable zone, however, doesn't guarantee Ross 128 b is actually habitable. Many red dwarf planets are tidally locked, meaning one side gets continually baked in sunlight while the other remains cold. Neither condition is conducive to life.

Additionally, red dwarf "flare" stars like Ross 128 and Proxima Centauri periodically erupt showers of ultraviolet and X-ray radiation, which would be harmful to Earth-like lifeforms. But since Ross 128 is less active than Proxima Centauri, it is now "the closest known comfortable abode for possible life," according to the European Southern Observatory.

European scientists found Ross 128 b using HARPS, the High Accuracy Radial velocity Planet Searcher. HARPS, which is attached to a 3.6-meter telescope at Chile's La Silla Observatory, works by splitting starlight into its component wavelengths. Exoplanets tug on their stars as they orbit, giving the stars a slight wobble. Those wobbles shift stars' spectrums, and by tracking these shifts, HARPS can infer planets are present. In this case, it took a decade of HARPS data to detect Ross 128 b.

At 11 light years away, Ross 128 b is already a stellar neighbor, but interestingly, it will soon drop by for a visit. The star is moving toward us, and will overtake Proxima Centauri as the closest sun to ours in about 79,000 years. 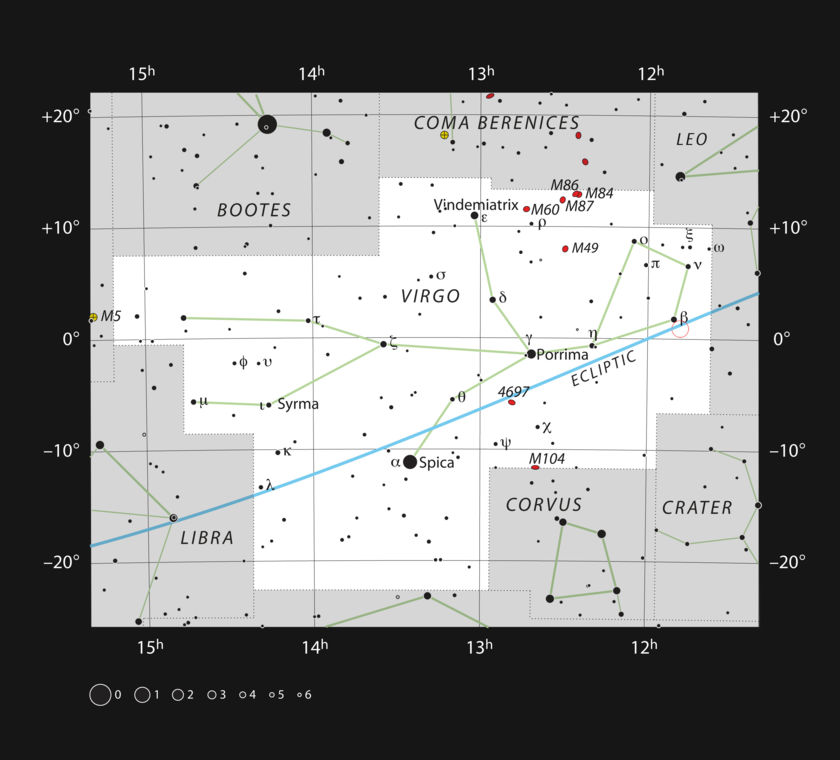 This chart shows the location of Ross 128 b near the constellation Virgo, circled in red at center-right.

Cool, low-mass red dwarfs are the most common type of stars—at least in our Sun's neighborhood. It's actually easier to detect exoplanets around red dwarfs because the stars are much fainter (none are visible with the naked eye from Earth) and thus don't wash out their surroundings as drastically. Additionally, close-orbiting stars like Ross 128 b tug on their stars more noticeably, making them easier to find with instruments like HARPS.

Red dwarfs are also a frequent target for SETI searches, mostly because of their prevalence. The Breakthrough Listen group, as well as the SETI Institute, are currently listening for radio signals coming from stars close to Earth.

In May, Abel Méndez, an associate professor of physics and astrobiology at the University of Puerto Rico, led a campaign at Arecibo Observatory to examine radio emissions coming from several nearby red dwarf stars. Méndez's team wasn't looking for extraterrestrial signals; they were hoping to learn how red dwarf flares interacted with exoplanets. The observing target list included a couple stars that had exoplanets, as well as a few that didn't—including, at the time, Ross 128.

When Méndez's team looked at the results, they saw something peculiar: some strange, semi-repeating signals coming from Ross 128. The signals had a frequency around 5 gigahertz, right in the middle of the 1-to-15-gigahertz range targeted by typical SETI searches. The signals didn't appear to be local interference, since observations made of other stars by Arecibo around the same time didn't see the signal. So in July, Arecibo, the SETI Institute's Allen Telescope Array, and the Green Bank Telescope listened again.

None of the telescopes heard anything. A subsequent analysis by Breakthrough Listen, accepted for publication in the International Journal of Astrobiology, concluded the signal Méndez's team saw probably came from one of several geostationary satellites in the direction of Ross 128.

In an email, Méndez said the discovery of an exoplanet around Ross 128 was a "fortunate result for our research," because his team is specifically interested in studying red dwarfs known to harbor exoplanets. His team plans to continue observing the system.

So, while Ross 128 b is a potentially habitable world, we haven't found aliens yet. Nevertheless, the announcement is just one more reason to get excited about new observatories like the Giant Magellan Telescope and Europe's Extremely Large Telescope. Both will be able to examine worlds like Ross 128 b in new detail, offering new insights into Earth-size exoplanets like never before.

The concept of space colonization studied by Gerard K. O'Neill makes solar systems with large asteroid belts the places where humans can go. No Earth-like planets required. Finding a "young" planet with little or no life where a Noah's Ark from Earth could grow a "Earth II" is also attractive. A planet with an already complex ecosystem would require humans be able to survive that ecosystem and the ecosystem survive humans. Of course, getting there is the problem. At around 3% of the speed of light it would take around 350 years to get there. Which might not be a big deal if you could be frozen. Let's go!

"At around 3% of the speed of light it would take around 350 years to get there. Which might not be a big deal if you could be frozen." -- To be frozen is impossible because ice is less dense than water, so freezing the human body destroys it at the cellular level.

"To be frozen is impossible-" Actually...no. There are techniques that can prevent damage at the cellular level and there are no laws of physics that make it impossible. Traveling faster than the speed of light is what is impossible. https://www.forbes.com/global/2008/0602/053.html#3f0a33651649