Fourteen months from today, NASA plans to launch a spacecraft into the Sun.

On July 31, 2018, a 20-day launch window opens for the Parker Solar Probe, a mission advertised as humanity's first visit to a star. The spacecraft will lap the Sun 24 times as it helps scientists unravel longstanding questions about what goes on inside our star's outer atmosphere, a region called the corona extending millions of kilometers into space. To do so, Parker Solar Probe will dive through the corona itself, eventually buzzing the Sun's surface by 5.9 million kilometers. That's just an eighth of the distance between the Sun and Mercury at the planet's closest approach.

The mission was previously named Solar Probe Plus. But during an announcement today at the University of Chicago, NASA associate administrator Thomas Zurbuchen said the spacecraft's moniker would be changed to honor Eugene Parker, the scientist who predicted the existence of the solar wind more than 50 years ago.

Parker, who turns 90 next month, was on hand to accept the honor.

"I'm certainly greatly honored to be associated with such a heroic, scientific, space mission," Parker said. "By heroic, of course, I'm referring to the temperature—the thermal radiation from the Sun, and the extreme measures developed to survive that radiation and collect scientific data." 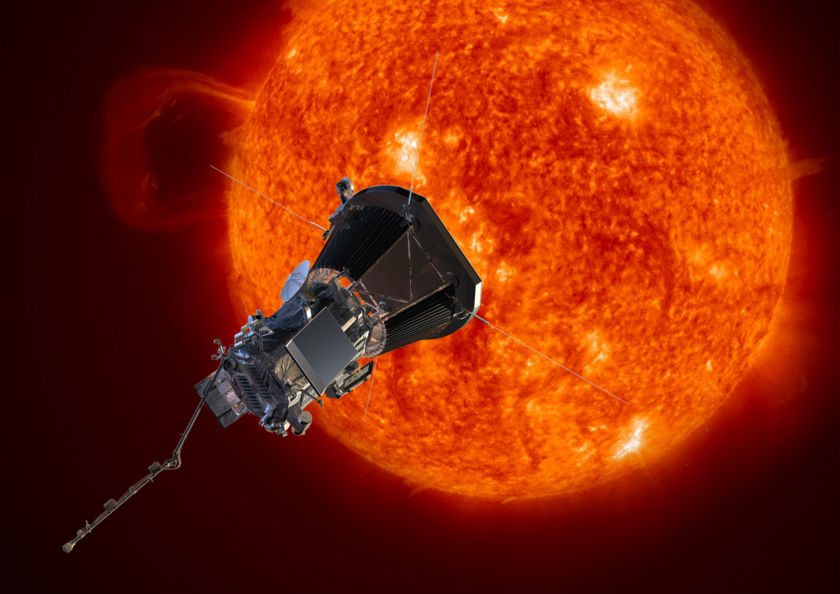 The Sun's atmosphere is weird

Intuitively, we humans know that the closer we get to a heat source, the hotter we get.

The Sun's atmosphere, however, doesn't quite work this way. Scientists call this phenomenon the coronal heating problem.

The surface, called the photosphere, has a temperature of about 6,000 Kelvin. This is where sunspots appear—the dark blobs you can see through a solar telescope.

Next comes the chromosphere. Here, the temperature increases from 6,000 to 20,000 Kelvin in a distance of less than 2,000 kilometers. This is where solar prominences—those massive, looping strands of burning gas—get their start.

Finally, there's the corona, the long, wavy region extending millions of kilometers into space, which you can see during a solar eclipse. The temperature here climbs over a million degrees. This is also where the solar wind—made of high-energy particles responsible for auroras and finicky satellite behavior—blasts away from the Sun at 400 kilometers per second.

Solar scientists don't quite understand all the mechanisms at play in the corona. How does it get so hot? And what causes the solar wind there to erupt here with such ferocity? These are the questions Parker Solar Probe will try to help answer, by making direct, death-defying measurements of the corona for the first time ever.

The spacecraft weighs 685 kilograms fully fueled, and consists of an instrument deck and large carbon composite heat shield. The 11.5-centimeter-thick heat shield will protect Parker Solar Probe from the 1,700-Kelvin temperatures it will encounter during its coronal dives, keeping the bulk of the spacecraft at room temperature.

Two views of the Solar Probe Plus spacecraft, and its instrument suite.

There are four science instruments:

FIELDS is a set of antennas and magnetometers designed to measure electric and magnetic fields. There are four antennas extending out away from the heat shield, and two magnetometers dangling off the back of the spacecraft.

The IS☉IS experiment has the fanciest acronym. It stands for Integrated Science Investigation of the Sun, and that little circled dot is the astronomical symbol for our Sun. (The unicode symbol for this character, if you're wondering, is 2609.)

IS☉IS is bolted to the side of the spacecraft, behind the heat shield, and measures high-energy electrons, protons and heavy ions streaming from the sun.

WISPR, the Wide-field Imager for Solar PRobe, is a set of two telescopes used to image the corona, inner heliosphere, and solar wind. The instrument is mounted behind the heat shield.

SWEAP stands for the Solar Wind Electrons Alphas and Protons investigation. It is actually three instruments—one of which pokes out from behind the heat shield—used to count electrons, protons and helium ions, and measure their velocities, densities and temperatures.

The need for speed

Earth orbits the Sun at a speed of about 30 kilometers per second. To spiral inward towards the Sun, Parker Solar Probe will have to cancel some of that momentum, which requires a big change in velocity, and a big rocket—the United Launch Alliance Delta IV Heavy.

The spacecraft will fly around the Sun in an elliptical orbit, picking up tremendous amounts of speed during close approaches, which last about 11 days. The remainder of the orbits will vary between 77 and 158 days. Here's a handy diagram: 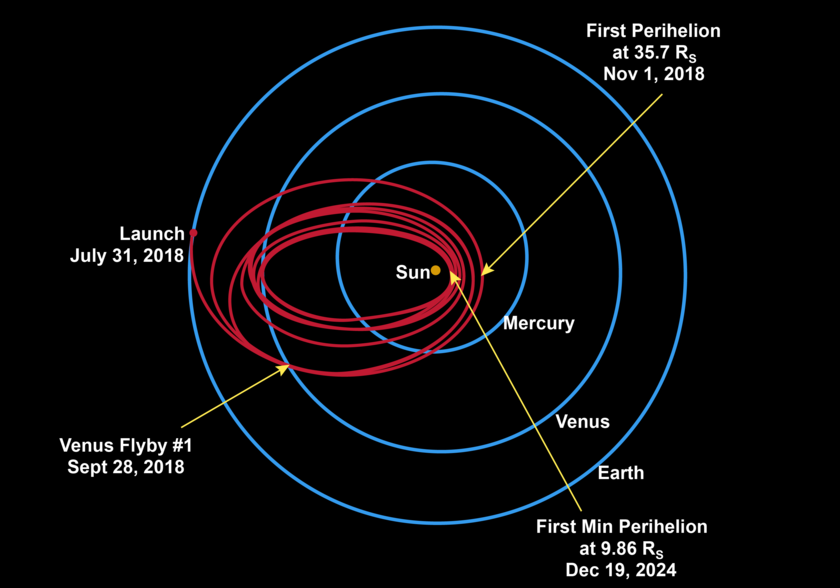 Twenty-four orbits are planned. During seven of those (including the first), Parker Solar Probe will swing past Venus to refine its trajectory. The mission design is similar to that of Cassini, which uses an elliptical orbit and occasional gravity assists from Titan. Parker Solar Probe, if successful, will operate for 6 years and 11 months, ending its mission in 2025.

Thanks for noticing! That wouldn't be a very impressive record if it was 200 km/hour, would it?

Wow, it's been a rough day for kilometers.