On November 13, 2015—Friday the thirteenth, for the superstitious—one of the International Space Station's eight power channels went dark. A multitude of systems, including the laboratory's guidance and navigation controls, switched to backup power. Working through the weekend, teams at Mission Control in Houston discovered the culprit was likely a failed Sequential Shunt Unit, which regulates power flowing in from a pair of the station's solar arrays.

This Friday at 7:55 a.m. EST (11:55 UTC), astronauts Tim Kopra and Tim Peake will clamber out of an airlock with a spare, 90-kilogram SSU. They'll head down the starboard truss and out to power channel 1B, a good 60 meters away.

"It's about as far on space station as you can go from the airlock," said Paul Dum, the lead spacewalk officer, at a Tuesday press conference. The two Tims will be practically dangling off the edge of the ISS. 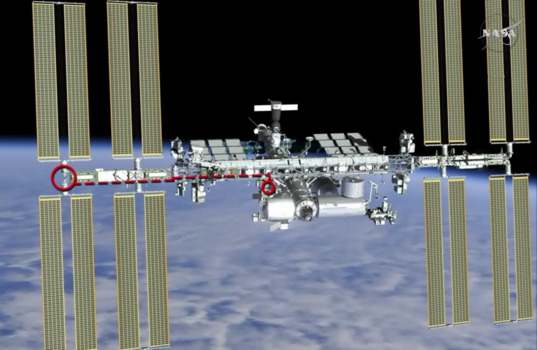 Whenever the station is in sunlight, the solar arrays charge, providing up to 120 kilowatts of electricity—enough to power more than 40 homes, NASA says. For safety's sake, Kopra and Peake will need to replace the failed SSU in the dark.

"We don't know what actually caused it to fail—it could have a short inside it," said Royce Renfrew, a spacewalk flight director. "So what we don't want to do is remove it with a potential short that could cause arcing and sparking as it comes off. We do it during the night pass—that way we're absolutely guaranteed there's no power flowing through there because there's no sun to generate any electricity."

Night and day durations vary according to the station's beta angle, a measurement between the ISS orbital plane and a vector from the Earth to the sun. Friday kicks off a period in which the beta angle yields relatively long, 31-minute night passes.

If everything goes smoothly, Kelly and Kopra might be able to make the swap itself in just 15 minutes. If they run into problems, NASA has several contingency options available, including leaving both SSUs disconnected while the station spends an hour in daylight.

After the faulty unit has been replaced, the two spacewalkers will head back to the station's habitat modules to finish routing cables in preparation for the arrival of two new international docking adapters. A SpaceX Dragon was carrying the first of those adapters to orbit last June when its Falcon 9 carrier rocket disintegrated shortly after launch.

A replacement adapter, IDA-2, will head to the station on SpaceX's ninth cargo flight, CRS-9, which has not yet been scheduled. Before that, another Dragon will fly to the station.

"All indications are that the data was very, very positive coming out of that launch in December," he said. "We're continuing to work with [SpaceX] to finalize the plans for the launch of the Dragon to the station. We'll probably be hammering that out over the next week or two here, and try to get that on the plans." 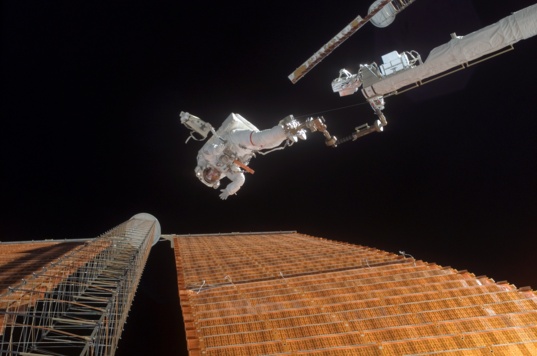 NASA astronaut Scott Parazynski works to repair a damaged ISS solar array during STS-120 in 2007. The dramatic spacewalk called for Parazynski to hang over the array while it was fully energized.