SpaceX is set to launch a sea level-monitoring satellite from the California coast this Sunday, while attempting to land the rocket's spent first stage on a floating drone ship in the Pacific Ocean.

The Jason-3 spacecraft is scheduled to lift off from Vandenberg Air Force Base Sunday, January 17 during a 30-second window that opens at 1:42 p.m. EST (18:42 UTC). After providing an initial boost toward orbit, the Falcon 9 rocket's first stage will separate, drop away and use a series of engine burns to fly back to one of SpaceX's autonomous landing platforms, which use thrusters to position themselves under descending rockets.

Last month, the company made history by flying a Falcon stage back to Cape Canaveral for an upright touchdown at Landing Complex 1. But SpaceX has yet to perfect the technique for ocean platform landings. Two prior attempts were close but unsuccessful, and the company has never tried from its west coast launch site. CEO Elon Musk announced the landing attempt Monday evening following a 7-second test firing of the Jason-3 booster at Vandenberg. 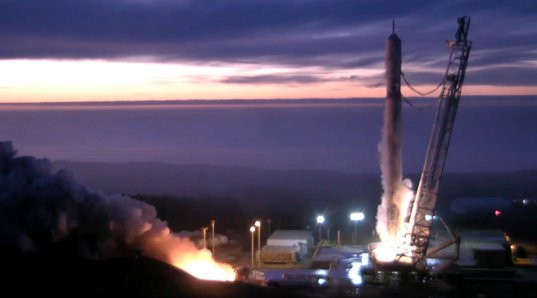 On Monday evening, SpaceX's Jason-3 Falcon 9 rocket was test-fired at Vandenberg Air Force Base for 7 seconds.

SpaceX has leased an area to build a west coast landing zone, but it wasn't clear what drove the final decision to use the drone ship. The vessels are used when a return to land is not feasible, including when the Falcon's first stage must reach a higher velocity before separation. Assuming a combined upper stage and payload mass of 125 metric tons, Musk said a velocity of 5,000 kilometers per hour was slow enough to return the booster to land, while 8,000 kilometers per hour necessitated use of a drone ship.

The Jason-3 satellite weighs 510 kilograms, while each of the 11 ORBCOMM satellites launched in December weighed 170 kilograms, for a total payload mass of about 1.8 metric tons. But Jason-3 is headed to a 1380 by 2328-kilometer orbit, much higher than the ORCOMM payload's 750 by 615-kilometer trajectory. Additionally, west coast launches—which are used to send spacecraft to high-inclination orbits—lose the speed advantage provided by the direction of the Earth's rotation. The Jason-3 Falcon booster is also not equipped with the high-thrust upgrades introduced during the December ORBCOMM mission.

Jason-3 is co-sponsored by NASA, NOAA, the French space agency CNES, and the European climate satellite collective EUMETSAT. It uses a radar altimeter to measure the height of the sea level within just a few centimeters. The data are used for climate modeling, as well as studying tides, hurricanes and tsunamis.

The satellite is the fourth U.S. co-sponsored sea height mission, dating back to TOPEX/Poseidon in 1992. Two Jason satellites followed that mission, named after the mythological Greek leader of the sea-faring Argonauts. Jason-3 will start by precisely flying one minute behind Jason-2, giving scientists the opportunity to compare sensor readings between the two spacecraft. Jason-2 will eventually be shepherded into a different orbit.

May the force be with the first stage and the ship.