At 7:45 a.m. EST (12:45 UTC) this morning, NASA astronauts Scott Kelly and Tim Kopra kicked off the work week by switching their spacesuits to battery power and exiting the International Space Station. The duo clambered out of the station's Quest airlock and made their way to a Mobile Transporter cart that had inexplicably jammed on rails running along the station's exterior truss. 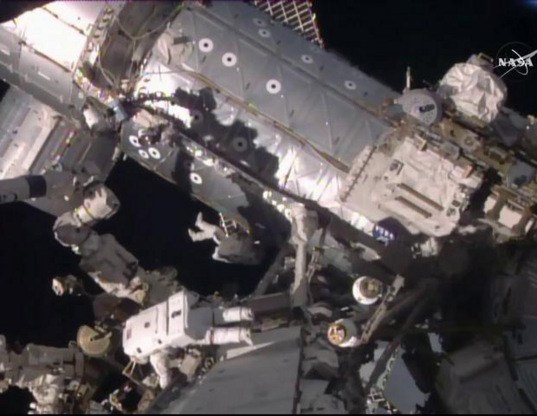 Just four hours earlier, a Russian Progress supply ship lifted off from the Baikonur Cosmodrome in Kazakhstan. Carrying 2.5 metric tons of fuel, water, oxygen and crew supplies, Progress soared into gray skies over the snow-covered Kazakh steppe. It reached orbit without a hitch, kicking off a two-day journey to the International Space Station.

When Progress arrives at the station's Earth-facing Pirs module Wednesday, the docking force will shimmy through the station's components—including the stuck MT cart. NASA wanted the MT to be freed and secured back at its proper resting place before that happened. Hence the reason for Kelly and Kopra's quickly planned spacewalk.

In less than an hour, the astronauts released brake handles on either side of crew equipment carts next to the MT. Ground controllers successfully moved the entire rig back to a nearby worksite, where it was safely latched into place.

Having finished their primary objective, Kelly and Kopra set to work on some extra tasks while they were already outside. They installed more cables along the station's hull to support a new docking adapter that will be installed to support SpaceX and Boeing commercial crew vehicles.

It was the third career spacewalk for Kelly, who is nine months into a yearlong mission to investigate how long-duration spaceflight affects the human body. Kopra was making his second trip outside the station. NASA TV commentator Rob Navias said this was the 191st spacewalk in support of space station maintenance.

At 11:01 a.m., the astronauts were back inside the Quest airlock. After re-pressurization, Tim Peake and Sergey Volkov opened the inside hatch for their crewmates. Another spacewalk is planned for mid-January, when the crew is scheduled to replace a failed power regulator keeping one of the station's eight solar array channels offline.

Meanwhile, Roscosmos, the Russian Federal Space Agency, said Progress was in good condition as it sped toward the station. The spacecraft, designated Progress 62 by NASA and also known as Progress MS, contains several software and communications systems upgrades. The vehicle was launched atop a Soyuz 2.1a carrier rocket, which contains an updated third stage. That Progress-Soyuz combination proved disastrous the first time around back in April, when a Progress was sent spinning out of control after separation. Russian flight controllers were unable to stabilize the damaged vehicle, and it reentered Earth's atmosphere several days later. 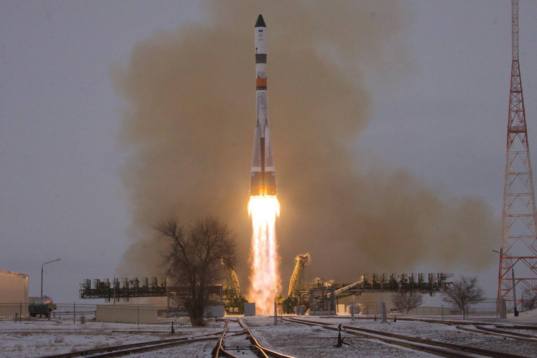 Progress MS lifts off from the Baikonur Cosmodrome on Monday, Dec. 21, 2015.