The Mobile Transporter, or MT, is dubbed the "slowest and fastest train in the universe," because it moves just two-and-a-half centimeters per second while the station speeds around the Earth at 27,600 kilometers per hour.

MT rails cover 85 meters across the orbiting laboratory's truss. The truss, often referred to as the station's backbone, sits perpendicular to most of the habitat and science modules and holds the massive solar arrays. The MT can move a variety of equipment, including the station's robotic Canadarm, to different points around the station.

NASA said the MT jammed yesterday, and efforts to free it have not been successful. 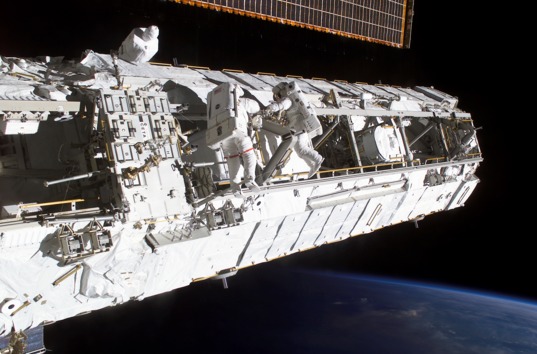 Astronauts Michael Lopez-Alegria (left) and John Herrington work on the newly installed International Space Station P1 truss during shuttle mission STS-113 in 2002. The CETA cart is visible to the left of the astronauts.

"We were moving the MT to conduct some payload operations, and shortly after we left one of the worksites we saw that [it] stopped," said Kenneth Todd, NASA's ISS operations integration manager. The cart is braked, but not latched, almost directly over the U.S. laboratory, Destiny.

Regaining the ability to move, and then secure the heavy MT is important because it is affected by forces imposed on the station during attitude changes, as well as spacecraft docking and undocking events.

A Russian Progress cargo vehicle is scheduled to undock Saturday morning, and before that happens, the station must slew to a different orientation. Another Progress ship launches Monday and is scheduled to arrive Wednesday.

"From a center of gravity standpoint, it's actually in a very good position," Todd said. Mission managers gave a green light to maneuver the station tonight as planned, paving the way for the undocking of Progress M-28M tomorrow morning. Progress is currently connected to the Russian Pirs module. 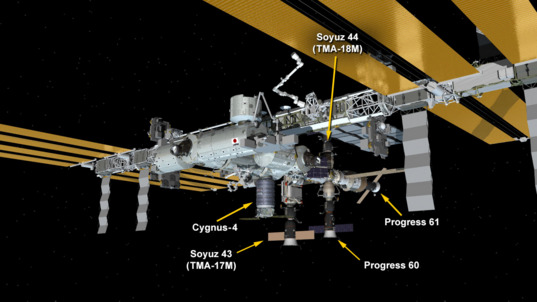 A contingency spacewalk by NASA astronauts Scott Kelly and Tim Kopra to free the stuck MT will likely occur Monday or Tuesday. "I really did kind of give the team some flexibility, with the understanding that they ought to shoot for Monday," Todd said. "We'll go to Tuesday if we have to."

A final decision on the spacewalk timing is expected Sunday. While NASA did not describe how Kelly and Kopra would attempt to move or secure the MT, Todd said the focus would be on the Crew Equipment and Translation Aid cart, or CETA, which attaches to the MT. "We think that's the source of the issue," Todd said.

Meanwhile, a new Progress is still on track to launch Monday. The spacecraft, dubbed Progress 62 by NASA, was already scheduled to spend two days traveling to the station, rather than using the new six-hour rendezvous profile. Russian flight controllers plan to test out new software and communications systems for inclusion on future Progress and Soyuz missions.

That Progress would arrive Wednesday, but NASA is still conducting an analysis on whether it could dock if Kelly and Kopra cannot secure the MT during their spacewalk.

Ground controllers are also considering other possible tasks Kelly and Kopra could perform on their spacewalk, which is expected to last about three-and-a-half hours. "While we're going out the hatch, we're going to look and see if there's anything in that general area that we can go and work on," Todd said.