LightSail Nominated for SmallSat Mission of the Year

The Planetary Society’s LightSail spacecraft has been nominated for the American Institute of Aeronautics and Astronautics (AIAA) Small Satellite Technical Committee Mission of the Year 2015 award. The nomination was revealed at the annual Small Satellite Conference, SmallSat, in Logan, Utah. Voting lasts through Wednesday, Aug. 12 at 11:59 p.m. MST. Anyone can submit a ballot—cast yours at sail.planetary.org/vote. 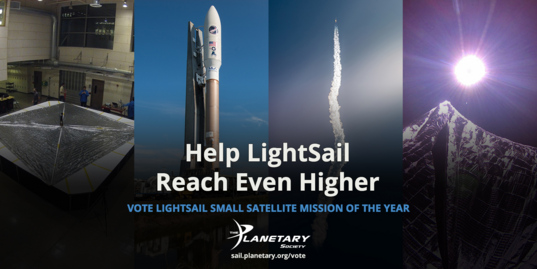 The LightSail test flight began May 20 with an Atlas V launch from Cape Canaveral, Florida. Despite two communications outages, the drama-filled mission completed its primary objective of deploying the spacecraft's solar sail on June 7. Planned atmospheric reentry occurred on June 14. Lessons learned during the test will be applied to the primary mission, a full-fledged demonstration of solar sailing propulsion scheduled for late 2016. LightSail will team up with another small satellite, Prox-1, for a ride to orbit aboard a SpaceX Falcon Heavy rocket.

The first annual AIAA SmallSat Mission of the Year award was presented in 2014, to Skybox Imaging.

It is almost a bit evil for Light Sail to participate in this contest. The next best one was pretty good, but it has no chance because of you. New "propulsion" technology for cubesats, that's unbeatable. All other contenders would love to have it.

I voted for Light Sail. You ought to also. Just remember you have to read the descriptions and vote for the others also. You vote high, medium or low to rate the mission objective. Only 1 other truly rated equal to Light Sail. The ratings ranges had 'funny' names kind of... the lowest name/rating was Golf Clap.