Following yesterday's download of LightSail's first sails-out image, the spacecraft team spent Wednesday trying to retrieve a second image from the CubeSat's flight software. While having the first image is nice, a second would be nicer, especially if it comes from the opposite-facing camera. The team would very much like to get a complete, 360-degree view of the sails if possible, before LightSail tumbles back into Earth's atmosphere. Now that the sails are out, the spacecraft's orbit has started to decay quickly. Early estimates show a reentry date of Sunday, June 14.

Communications with LightSail have become more erratic since sail deployment on June 7. The spacecraft is still tumbling—albeit much more slowly than it was in CubeSat form—and on many ground station passes Cal Poly engineers report the connection is sluggish. On Wednesday's last two overflights, no usable data were returned.

An image from the opposite-side camera has almost finished downloading, but it has yet to compile into anything more than a vacant, all-grey scene. This morning, we crowdsourced the problem in hopes the imaging community might be able to help. So far, no one has had any luck. The team must soon decide whether or not to give up and capture fresh images with the second camera, and kick off a new download.

In the meantime, there is also a partial second image that was captured with Camera 0—the same camera responsible for the full sails-out image. On a telecon today, Cal Poly engineer Justin Foley pointed out the partial, scrambled image might contain a slice of Earth, which had rotated into the frame during the imaging sequence. At The Planetary Society, Emily Lakdawalla processed the image, and here is the result.

The partial image shows Earth peeking through gaps next to LightSail's metallic, 4-meter sail booms. At the time the image sequence began June 8, LightSail was over Pooley Island on the coast of British Columbia, 330 miles (530 kilometers) northwest of Vancouver. 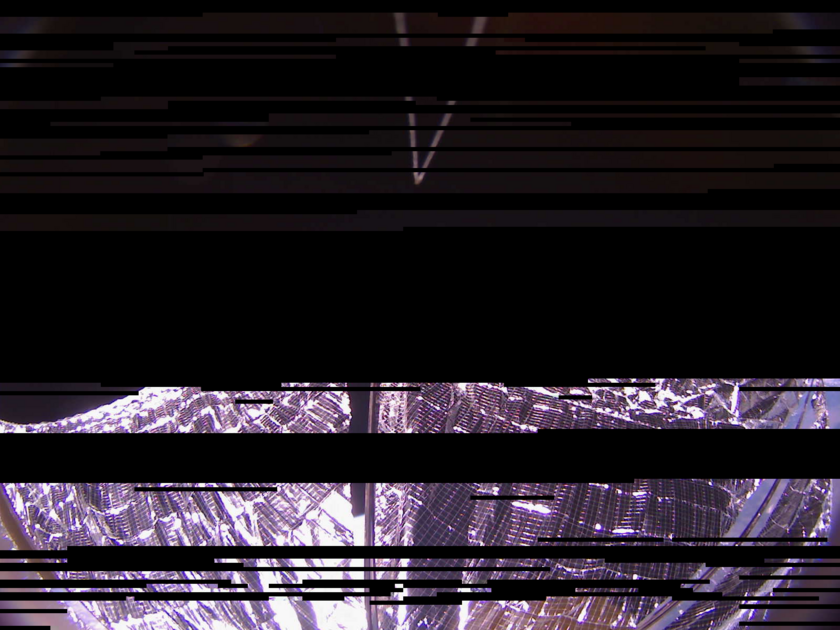 This image of LightSail's deployed solar sails was captured on June 8, during the same imaging sequence that produced the first complete sail deployment image. The spacecraft rotated during the imaging sequence, bringing Earth into the field of view between the spacecraft's solar sail booms. The image was only partially downloaded; engineers have yet to decide whether to complete the image given the limited amount of time remaining in the mission. The "V" shape could be related to the sun glint seen in the first image.

It might be useful and publishable result to track your carrier power and determine how much multi-pathing you are seeing off the sail, if that is the cause of the "sluggish" comm that you report.

PaulF: The communication speed used is 9600Bd so any meaningfull multipath would have to be way looonger than size of the sail. Good luck from the PSAT/Bricsat transponder team!

Yes, although their carrier frequency is in the UHF. The wavelength of that is of order 1 meter which is much less than the sail size and they must be using a dipole antenna or something with a very broad pattern which might reach the sail (a guess). So I think they could still see multi-pathing. But were their current problems just with multi-pathing, I would think their signal would be picked up intermittently when the signals interfered constructively. Sounds like they are seeing two tones at different frequencies, and no modulation, which is weird.