How to get a satellite to geostationary orbit

As I wrote about the GSLV-D5 mission, I was tempted to include this standard informational line, punched directly out of the press kit:

The satellite was placed into a geostationary transfer orbit with a perigee of about 180 kilometers, an apogee of about 36,000 kilometers and an inclination of 19.3 degrees.

But unless you’re familiar with basic orbital mechanics, that sentence doesn’t have much meaning. What’s a transfer orbit? Is there a difference between geostationary and geosynchronous? Why is there such a wide range between the perigee and apogee?

For help explaining all of this, I turned to Mike Loucks of The Astrogator’s Guild. The Astrogator’s Guild uses a software package called STK/Astrogator from Analytical Graphics Inc. that is used to help spacecraft mission managers plan the trajectories of a variety of space missions. The software has been used on numerous NASA missions, including WMAP, LRO, LCROSS, New Horizons, Messenger, LADEE and MAVEN.

The first concept I want to tackle is the difference between a geosynchronous and geostationary orbit. Although these terms are often used interchangeably, they are not the same thing:

A Geosynchonous Orbit (GEO) takes a satellite around the Earth at a rate of once per day, keeping it roughly in the same area over the ground.

A Geostationary Orbit (GSO) is a geosynchronous orbit with an inclination of zero, meaning, it lies on the equator.

Think of it like this: the “synchronous” part of geosynchronous describes the rate of the satellite’s orbit but says nothing about its inclination—the orbit’s angle with respect to the equator. A geosynchronous satellite with a non-zero inclination will trace out a figure eight in the sky as it dips above and below the equator.

The “stationary” part of geostationary describes how a satellite in this orbit remains fixed with respect to an observer on the ground. This is an ideal orbit for communications satellites, since ground-based antennas can remain pointed at the same spot in the sky.

This animation, created with data from the GRACE spacecraft, shows the variances in Earth's gravity field.

It’s also important to remember that even geostationary satellites drift over time as they are tugged on by the moon and sun’s gravity. For that matter, the Earth’s gravity isn’t uniform, either, so the satellite needs an onboard fuel supply to make slight corrections over time.

What does a geostationary transfer orbit look like, and how does the satellite get from there into its final position? Of the two satellites I mentioned, GSAT-14 took the more common route, so we’ll use it as an example. (SES-8 used a supersynchrounous transfer orbit, where the orbital period is longer one day.)

Mike doesn’t have all the parameters required to make an exact GSAT-14 simulation, so he’s made a few assumptions and created a virtual cocktail napkin outline for us to follow.

Let’s revisit the line I struck from my GSLV article:

The satellite was placed into a geostationary transfer orbit with a perigee of about 180 kilometers, an apogee of about 36,000 kilometers and an inclination of 19.3 degrees.

GSAT-14 launched out of India’s Satish Dhawan Space Centre. The mission began in powered flight under the GSLV, which is represented by the red line: 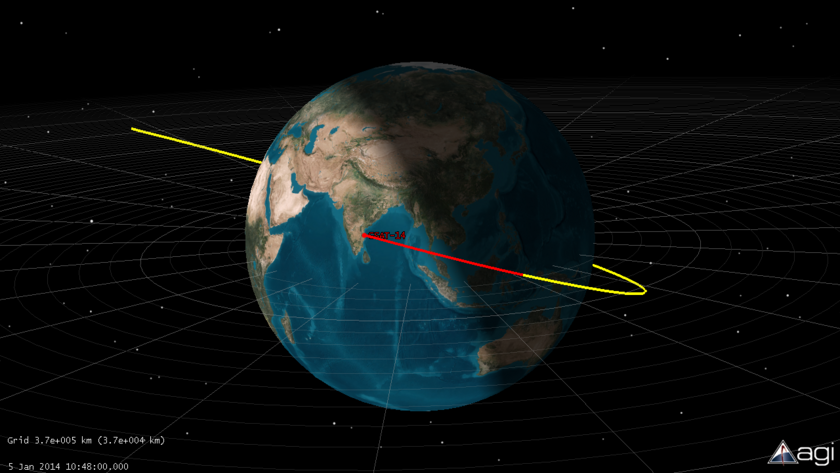 When it hit the equator, the GSLV finished its share of the work and released GSAT-14. This point in the orbit is our descending node. Ascending and descending nodes are just fancy ways of saying you crossed the equator in either a southbound (descending) or northbound (ascending) direction. For a geostationary transfer orbit, the descending node is also at perigee, the orbit’s lowest point. Here, GSAT's altitude is 180 kilometers. For comparison, the International Space Station has a typical altitude of just over 400 kilometers.

GSAT-14 now coasts as it dips beneath the equator to a latitude of 19.3 degrees (our inclination), and starts heading back north. As we cross the equator again, we’re at the ascending node, and we’re also at apogee, the highest point of our orbit—36,000 kilometers above the Earth. For perspective, the Earth’s radius is 6,400 kilometers and the average distance to the moon is 384,000 kilometers. In other words, we’re five-and-a-half radii above the planet, and roughly one-tenth of the way to the moon.

Here’s what that looks like from two different angles: 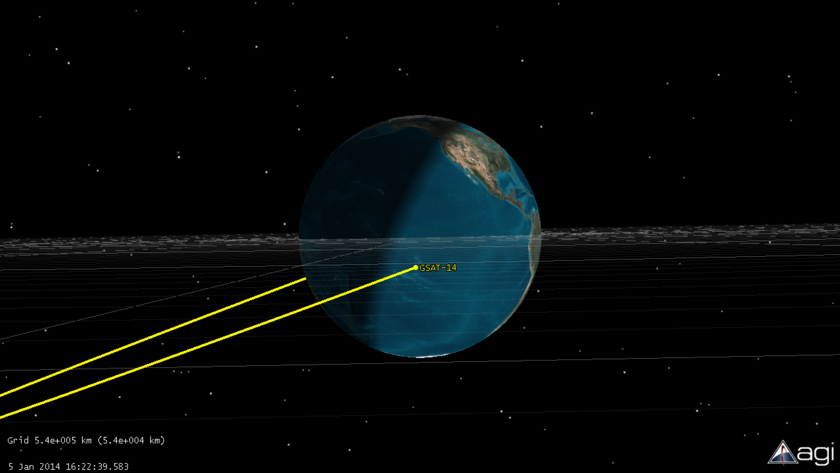 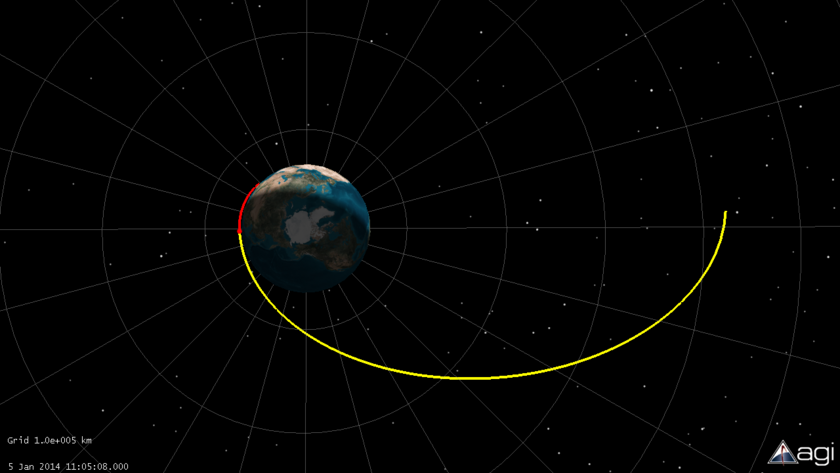 Our orbit is still fairly elliptical at this point. That’s no good—we want to circularize the orbit and lower its inclination to zero. We can accomplish both of these tasks by conducting a series of engine burns at apogee. According to the Indian Space Research Organization, GSAT-14 used three Apogee Motor Firings (AMFs) to get into its final orbit. For simplicity’s sake, we’ll assume a burn happens each time the satellite hits apogee.

Why do three burns, instead of one long burn? Mike says that in some cases, single, long-duration burns can be less efficient, and there may also be limitations on a spacecraft’s engines that prevent them from firing for too long. We’ll also assume each of the three burns gets us a third of the way to our final orbit.

After the first burn, our orbit becomes the pink line: 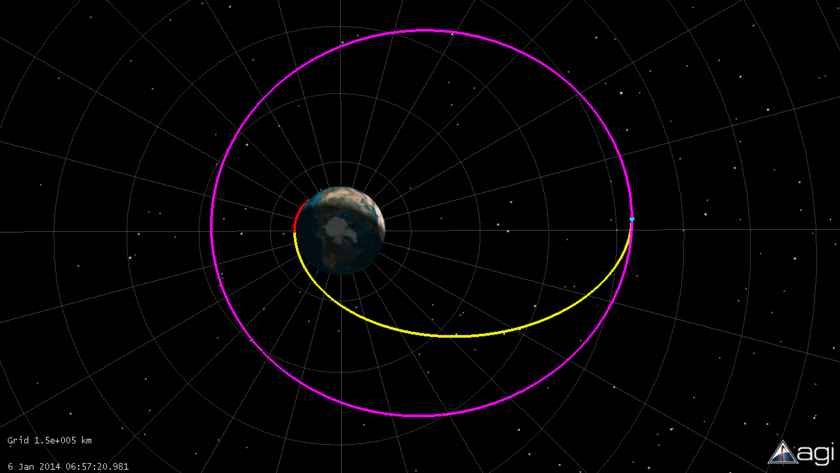 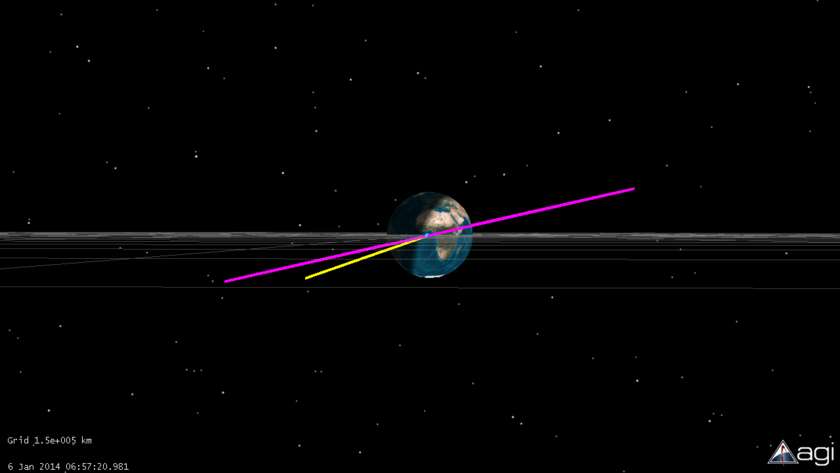 After a second burn at apogee, our orbit becomes the teal line: 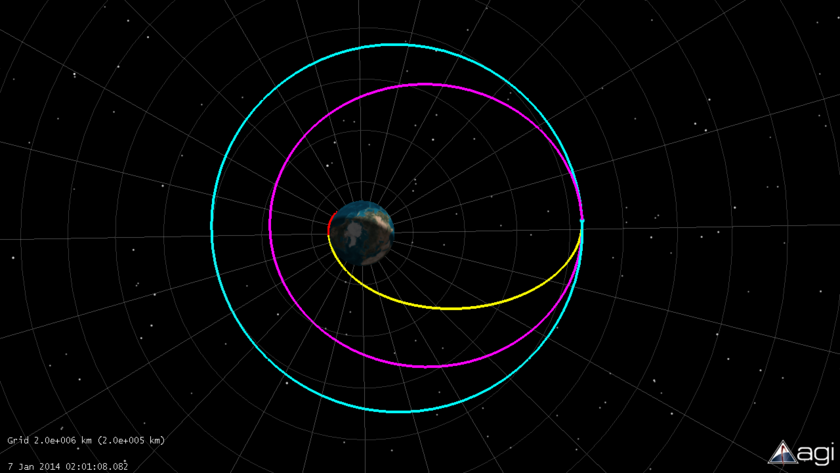 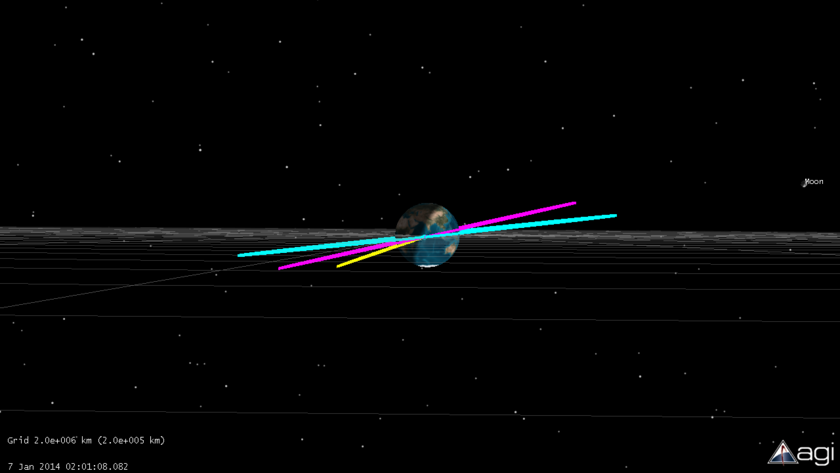 And after a third burn at apogee, our orbit becomes the green line: 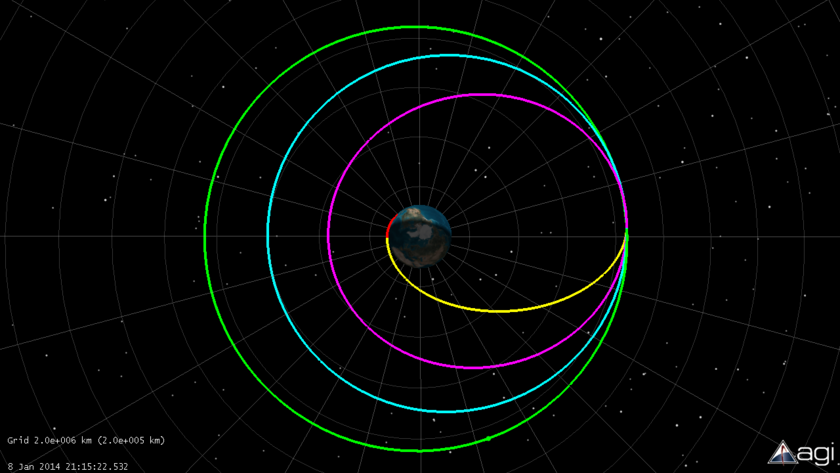 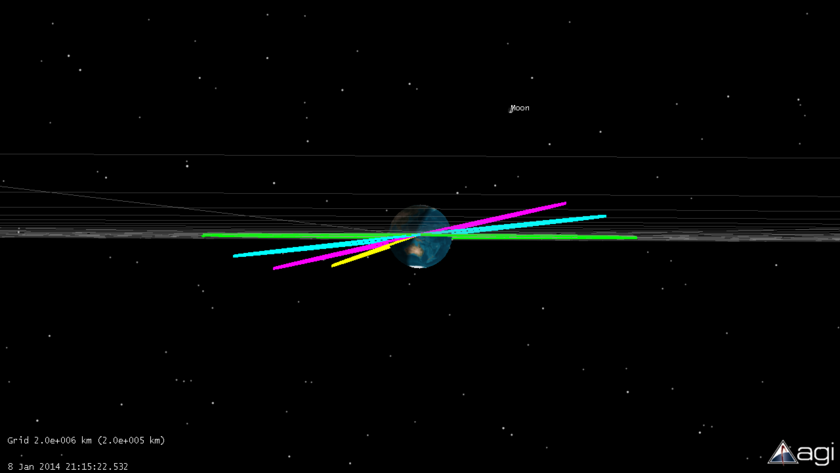 And there we are! One geostationary satellite roughly 36,000 kilometers high, positioned at 74 degrees East, ready to provide communications services to the people of India. Here’s a video that puts it all together:

Nice explanations, Jason (& Mike)! An additional complication then is timing this all so that the final burn ends with the satellite at the desired longitude. Perhaps that's achieved by waiting out a few of the un-syncrhonous orbits until the the longitude is right?

Wait a minute. You're not just circularizing the orbit, you are also changing the inclination. As I understand it, the orbit will always include the point of the last burn, so there has to be at least one burn on the ascending or descending node of the orbit. Something is missing in this explanation.

Oh, wait, the apogee IS the ascending node. Got it!

What an informative article! Thank you so much!

Hi, well written, but I am not sure about a detail: AFAIK, orbital plane changes are cheaper if the speed is low. For the same delta v you get more velocity angle change if the speed is small. So I suspect that the first burn is mainly devoted to orbital plane alignment and the following ones to circularization.

Gene, I wondered about that too. The “final” orbit may still require a little tweaking. From Mike: "In order to get into the right spot (longitude) at GEO, a spacecraft will usually transfer up to an intermediate orbit slightly above or below GEO altitude. At this altitude, the spacecraft will drift slightly with respect to the Earth (rather than remain fixed, as it would if it were at exactly GEO altitude). The spacecraft will then drift into the right spot, and then do small circularization burns at exactly the right spot to stop the drift and then "lock" into the final GEO location. (I say "lock" because GEO spacecraft still require maneuvers to keep them from drifting out of their assigned slots over time due to the non-spherically symmetric nature of the Earth's gravity).”

Gene and Jason, The third firing of the liquid apogee motor on January 9 placed the satellite in a circular near-geostationary orbit with an inclination of 0.25 degrees. The satellite was then allowed to slowly drift towards its orbital slot of 74 degrees east. It reached there on January 18, when a final short burn of the apogee motor placed it in the intended geostationary orbit. See this series of press releases from ISRO to see the sequence of activities to move the GSAT-14 from the geostationary transfer orbit it was placed on at launch to its final orbital slot. http://isro.org/gslv-d5/d5-post-updates.aspx

If I recall correctly, the burns are done 180 degrees from the needed point of effect. EX: burn on perigee to affect apogee.

It is really nice information shared ever, i have a question from the date of launch till final destination (Clarks belt), how the communication remains intact with satellite when it goes off the line-of light ...?

Through a global network of ground stations. This network is used also to relay data to the non-synchronous and non-stationary satellites.

The earth moves through space at 30-35km/s. How does the maths include the location of the earth in space, whilst the earth moves with such variable velocities around the sun in space? Also how does the satellite trajectory account for the earths motion towards and away from the sun of about 3 million miles caused by the elliptical orbit around the sun? thanks John M

Good question from John Martin. But this question was posted on 2nd February, and I wonder if there is anybody who can answer? This is important. All motions need to be taken into account. I would like to add my own questions: If the satellite is 36,000 km out, what speed is it rotating at to remain geosynchronous? Must be a fair clip. As the earth is orbiting the sun, the satellite must also be orbiting the sun but at a much faster pace. Does anyone know what that might be? Many thanks and if anyone has any answers I would be most appreciative, grateful and interested. Cheers ;)

Quite late answers, but in case it still helps: - Since you're launching from the Earth you already have its orbital velocity around the Sun so you don't really care about how Earth moves around it (except for small perturbations due to third body acceleration, SRP...). - If you want to constantly point to Earth the rotation period must match the orbital one, so it would be 1 day (the fact the orbital and rotation period match is why we always see the same face of the Moon) - The satellite orbits the Sun with the Earth. It is true that, as it also orbits the Earth, if you see it from the Sun at some moments it goes faster (around 3.8 km/s faster that is the orbital velocity for a geosynchronous orbit), so it "overtakes" the Earth, and at other moments it moves slower so it "stays behind". But on average it has the Earth velocity around the Sun. As I said, it's been a long time since the last questions were posted, but I just arrived here so I thought it still might help. Regards, Pablo

Thanks for this explanation. I was wondering why a satellite for a geostationary orbit was deployed at around 400km and not at 35000km and this article explains it perfectly. Only suggestion: rotate the polar view images 90 degree clockwise, so it is more clear, that the ascending node is at the apogee.