Video: Ride along with Orion as It Plummets Back to Earth

One of the highlights of Orion's Dec. 5 test flight was the real-time imagery shown on NASA TV, thanks to cameras positioned to look out the spacecraft's windows. The videos provided an astronaut's-eye view of Earth as Orion climbed to a height of 5,800 kilometers before heading back toward the Pacific Ocean for splashdown.

During reentry, a ball of plasma formed around the vehicle as it impacted the atmosphere at about 32,000 kilometers per hour. The plasma prevented Orion from sending any signals back to Earth, creating a temporary blackout. Now that the spacecraft is home, the cameras have been retrieved, and a full, ten-minute video from the test flight's final moments is now available. The video has been overlaid with a mysterious, anticipatory music track that matches the beauty of the scene.

With Earth below, an aft-facing camera shows the superheated plasma form in a gradual glow, eventually turning into a brilliant magenta as the spacecraft's heat shield is subjected to 2,200-degree Celsius temperatures.

Steering puffs from Orion's Reaction Control System, or RCS, can also be seen, along with the jettisoning of the vehicle's Forward Bay Cover, which kicks off the parachute deployment sequence. Here's a screenshot of the Forward Bay Cover as it pulls away. The image has been enhanced in an attempt to bring out additional detail. 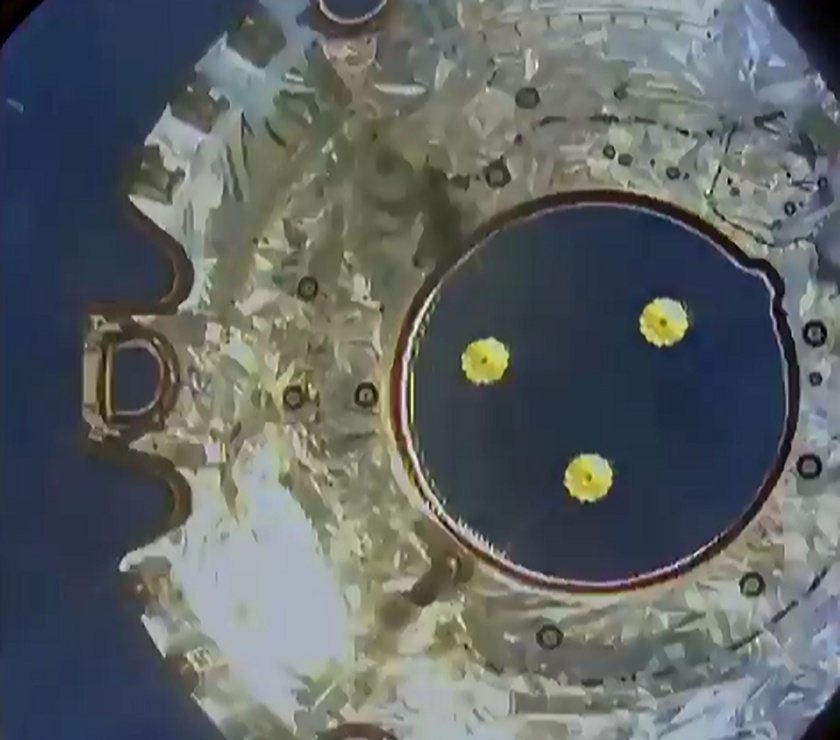 Orion's Forward Bay Cover was jettisoned four minutes before splashdown, kicking off the parachute deployment sequence. This screenshot has been enhanced to bring out additional details.