NASA’s Orion spacecraft returned safely to Earth this morning following a picture-perfect test mission. Riding three, yellow-orange columns of flame, Orion lifted off from Cape Canaveral Air Force Station at 7:05 a.m. EST (12:05 UTC). After two orbits, it splashed down into the Pacific Ocean at 11:29 a.m., about 1,000 kilometers southwest of San Diego. NASA TV viewers were treated to live video from the capsule’s windows as it circled the Earth and hurtled back through the atmosphere.

At a post-flight press conference, media representatives gave a round of applause to Orion program representatives as they entered the room. "I don’t think I’ve been at a press conference where you’ve applauded,” said William Gerstenmaier, the associate administrator for NASA's Human Exploration Directorate. "You’re usually sharpening pencils and scowling at me. Thank you for catching that spirit.” 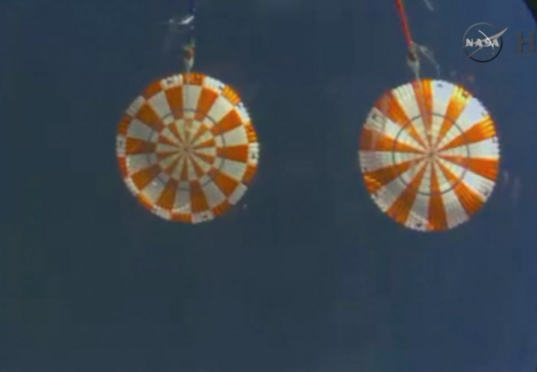 Orion descends toward the Pacific Ocean under its main parachutes, as seen by onboard video cameras. 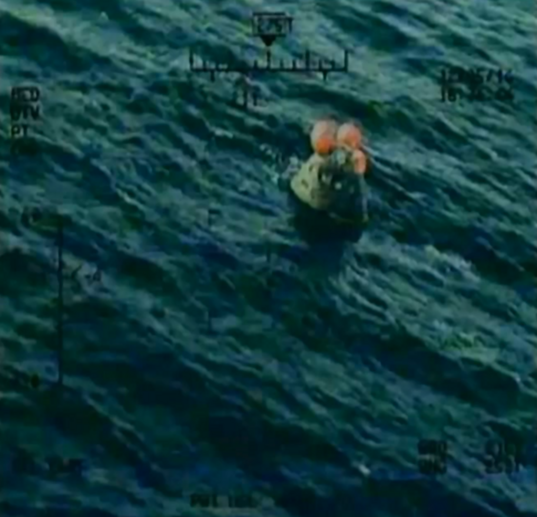 Orion floats in the Pacific Ocean following its safe return to Earth on Dec. 5. It came to rest upright, in the so-called Stable One position.

The mission appeared to go off without a hitch, except for a glitch with the Crew Module Uprighting System, a series of airbags that inflate atop of the vehicle to keep it upright in the water. One bag failed to inflate and another only inflated partially. Nevertheless, the capsule was bobbing right-side-up in the ocean as Navy divers prepared to tow it into the flooded well deck of the USS Anchorage.

“It’s hard to have a better day than today,” said Mark Geyer, Orion’s program manager. Geyer said he particularly enjoyed seeing live views of the Earth’s limb, which were provided by cameras positioned to look out the capsule’s windows. “What I liked about that view is that you can see the frame of the window, so you feel like you’re an astronaut,” he said. 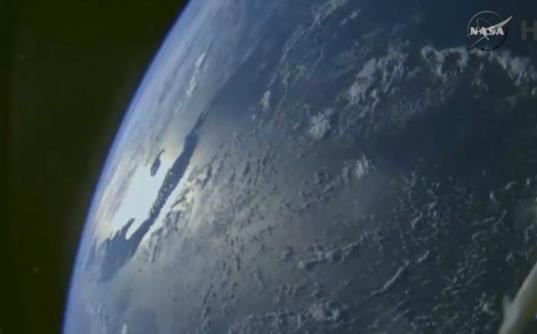 View of Earth out of Orion's window

This view of Earth from the Orion Crew Module was captured during the spacecraft's first orbit.

The success of the mission, known as Exploration Flight Test 1, is a large milestone for NASA. It bolsters the credibility of the agency’s human exploration program, which has been mired in uncertainty since the retirement of the space shuttle program in 2011. Orion itself was originally part of NASA’s now-defunct Constellation program, and is now a key component of the space agency’s Mars plans.

Orion’s maiden voyage was a four-hour, 24-minute test flight designed to test all of the vehicle’s critical functions—including the heat shield, which must protect the capsule during atmospheric re-entry from beyond low-Earth orbit. The mission was originally scheduled for Thursday, but three failed launch attempts forced a postponement. Friday's effort went off without a hitch, right at the start of a two-hour, forty-minute launch window.

The Delta IV Heavy rocket carrying Orion lumbered slowly off the pad, rising toward low clouds blanketing the area. Moments later, at the Kennedy Space Center’s Vehicle Assembly Building, the low rumble of the rocket’s three RS-68 engines arrived. The vehicle then disappeared into the cloud deck. Four minutes after liftoff, all three of the Delta IV Heavy’s Common Booster Cores had been jettisoned, and 12 minutes later, the rocket’s second stage shut down, inserting Orion into its initial orbit.

NASA's Orion spacecraft lifted off on a two-orbit, four-hour shakedown cruise Friday morning at 7:05 a.m. EST. These video clips were taken from the roof of the Vehicle Assembly Building at Kennedy Space Center.

"So far, everything is going well,” said Mike Hawes, Lockheed Martin’s Orion program manager, shortly into the flight. Hawes said all of the spacecraft’s critical launch separation events went off without a hitch. "The jettison of the panels and the LAS (Launch Abort System) were very important to us,” he said, adding that the team at Houston’s Mission Control Center was able to download in-flight data from the spacecraft. 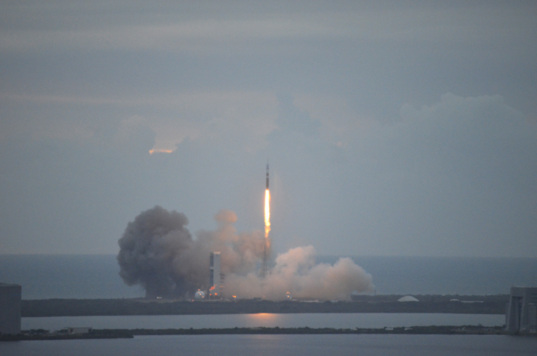 Following a lap around the Earth, the Delta IV rocket’s upper stage re-ignited right on time at 9:00 a.m. The engine burn raised Orion’s apogee to about 5,800 kilometers. Live telemetry from United Launch Alliance showed the spacecraft’s perigee dropping below zero, since the mission's second orbit was slated to end in the Pacific Ocean.

Orion disabled its flight cameras as it passed into the Van Allen radiation belts, which subjected the spacecraft to a barrage of charged particles. There were two radiation detection systems aboard Orion. One was RAM, the Radiation Area Monitor. RAM consists of sensors throughout the spacecraft that recorded the peak level of radiation the spacecraft experiences. The second was BIRD, the Battery-operated Independent Radiation Detector. BIRD measured radiation levels throughout the flight. This information can be cross-referenced with flight telemetry to determine where Orion encountered various levels of radiation. 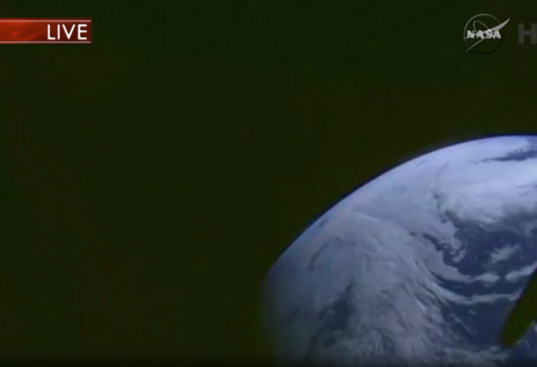 A flight camera positioned to look out the window of the Orion crew module captured this view of Earth as the spacecraft climbed toward its 5,800 kilometer apogee.

Orion reached apogee at 10:11 a.m. The predicted-versus-actual apogee values were extremely close, off by less than half of a kilometer. The spacecraft’s peak altitude was 5,800.4 kilometers, or 3604.2 statute miles. At that point, Orion was higher than any spacecraft designed for humans had been in more than 40 years.

The Crew Module began flying free for the first time at 10:28 a.m., when it separated from the Service Module and Delta IV upper stage. At 11:02, Orion completed a 10-second burn to test its reaction control system and fine tune its orientation for re-entry. It slammed into the upper reaches of Earth's artmosphere at 11:18 a.m., at a speed of about 32,000 kilometers per hour. This subjected the spacecraft to a force 8.2 times that of gravity, almost double the force a crew encounters during a typical Soyuz capsule return flight.

Following a brief signal loss due to the bubble of superheated plasma that formed around the vehicle, Orion’s forward bay cover was jettisoned, releasing drogue parachutes that stabilized the spacecraft. Moments later, onboard cameras showed three main parachutes deploy and unfurl, with splashdown occurring at 11:29 a.m.

During the mission, Flight Director Mike Sarafin increased the amount of time during which Orion could remain powered on from 15 minutes to one hour. This allowed Lockheed Martin to monitor the temperature in the cabin, and how much heat had seeped from the heat shield to the rest of the spacecraft. Orion will now be ferried back to Naval Base San Diego by the USS Anchorage. From there, it will be trucked cross-country back to Kennedy Space Center. NASA officials expect it to arrive by Christmas.

Astronaut Rex Walheim said that despite the apparent success of the flight test, he was looking forward to the next steps in NASA’s human exploration program. “As impressive as this flight was, this was just serial number 001 of Orion,” he said. “Serial number 002—that one is going to be on the Space Launch System." 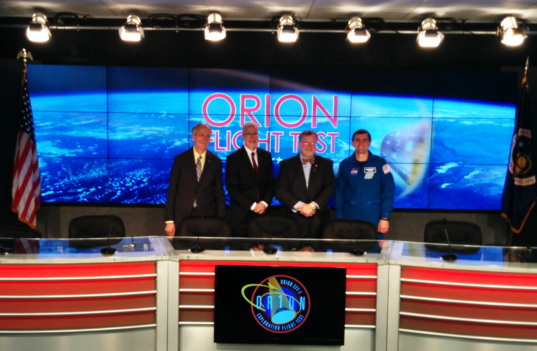