Yesterday, cosmonauts Fyodor Yurchikhin and Alexander Misurkin completed a six-and-a-half hour spacewalk outside the International Space Station. In addition to performing maintenance and swapping out science experiments, the duo installed power cable clamps for a future module called Nauka. At some point in the near future (possibly December), the Russians plan to detach the Pirs docking module and replace it with Nauka, a Multipurpose Laboratory Module (MLM). Pirs will be sent tumbling through the atmosphere into a fiery reentry.

During the spacewalk, astronaut Karen Nyberg snapped this photograph from the Cupola: 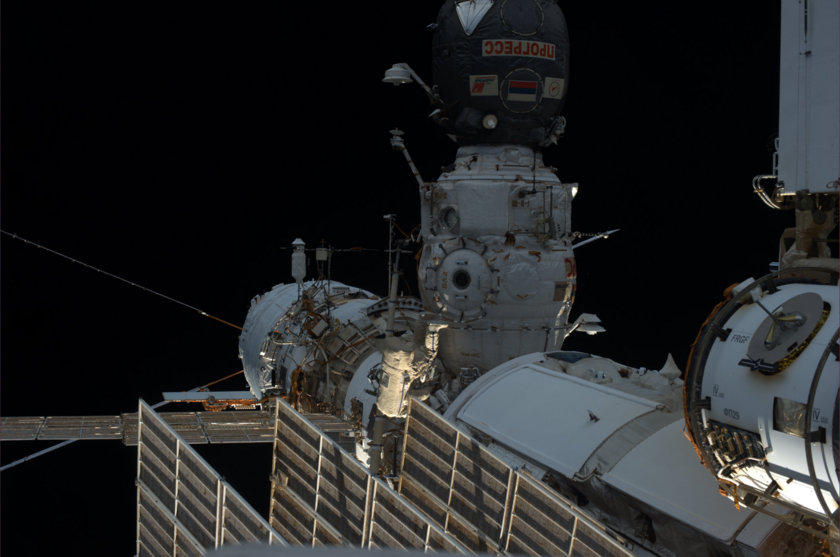 Cosmonaut Alexander Misurkin works during a spacewalk outside the International Space Station on June 24, 2013. Misurkin is illuminated by sunlight near the center of the photo, just below the Pirs airlock.

I like the image because it's both artistic and educational. Misurkin is upside-down near the center of the picture, and his Orlan-MK spacesuit is caught in the sunlight, making him stand out against his shadowed surroundings. Misurkin will surely appreciate the photo as a momento from his first spacewalk.

The image also provides a neat perspective on the station's Russian segment. Misurkin's feet are right below the Pirs module's airlock. At the top of Pirs is Progress M-18M, a resupply vessel that arrived in February. Directly opposite Pirs and out of the frame is the Poisk module, with Soyuz TMA-08M attached.

In the foreground, extending from the station out to Misurkin is the Zarya module. Opposite that is Zvezda, which is currently connected to the European Space Agency's Automated Transfer Vehicle (ATV) 4, the Albert Einstein. You can see two of the ATV's four solar arrays edge-on, forming a V shape in the left of the frame.

Thanks again Jason for another nice update. In your future endeavors, I hope you get a chance to tell Karen Nyberg that she is a good photographer, not just for the photo itself but she also captured the subject in full context.