Meet VOX, a proposed mission to uncover the secrets of Venus

When I wrote my blog post on the New Frontiers mission proposals, I could identify eleven of the twelve proposals. One, though, then had no public trace. Shortly after my piece was published, several people emailed me to tell me that the twelfth proposal was a third Venus mission called the Venus Origins eXplorer (VOX). However, they offered no details on its implementation.

Now the team proposing the mission will present its implementation at an upcoming scientific conference. Their abstract for the talk reveals key facts about the proposal, and it’s a gutsy break with the missions that have been assumed for New Frontiers Venus missions. 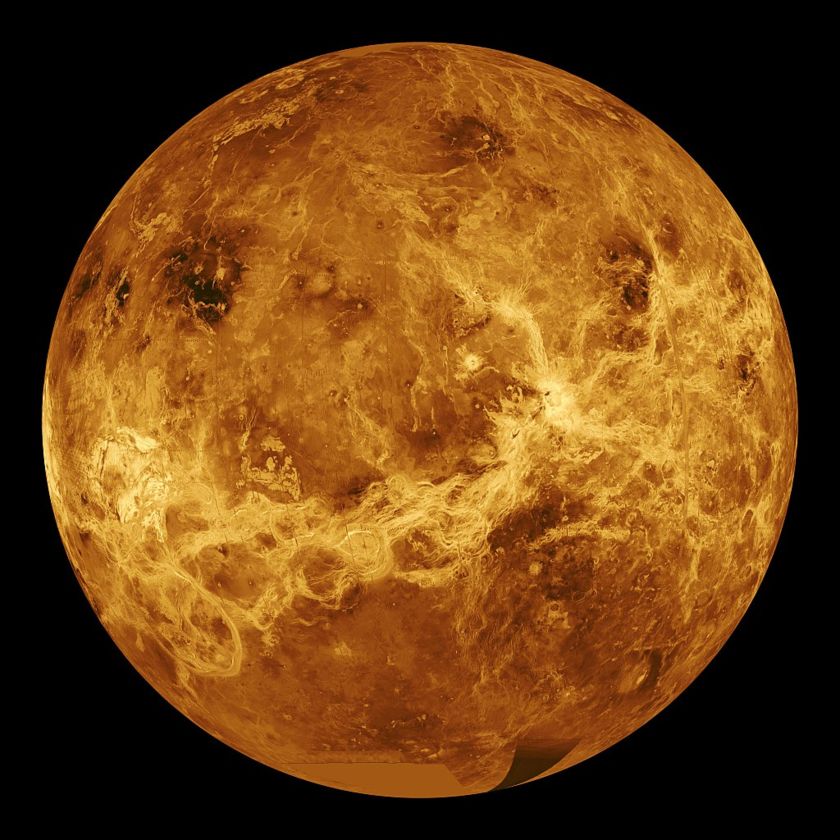 NASA's Magellan spacecraft mapped the surface and gravity field of Venus in the early 1990s. The VOX mission would return with a modern suite of instruments to remap the surface and study the lower atmosphere.

To understand the strategy the VOX team is following, it’s useful to look at the history of the Juno Jupiter orbiter mission. Every ten years, the planetary scientific community establishes its priorities for the exploration of the solar system in process known as the Decadal Survey. The 2003 Decadal Survey report called for a Jupiter Polar Orbiter with Probes mission. The orbiter was to study global patterns and the magnetosphere while three atmospheric probes were to examine the composition and deep structure of the atmosphere. Unfortunately, since the Galileo mission with its shallow atmospheric probe, the United States has lost the technology to build probes capable of entering Jupiter’s atmosphere. The team that proposed the Juno mission focused on the desired scientific goals and demonstrated that they could be met with just an orbiter with the right instruments. Based on that well-presented argument, the mission was selected and is now orbiting Jupiter.

The goals for a New Frontiers mission for Venus have assumed an atmospheric probe that would also conduct surface measurements once it landed. The scientific requirements NASA’s managers established for a mission appear tailored for that kind of a mission based on the goals set out by the more recent 2013 Decadal Survey report. For example, the ratio of key gases and their isotopes can only be made by a probe that enters and directly samples the atmosphere. With those measurements, other questions such as past hydrologic cycles and the existence of now lost oceans can be addressed. During its descent the probe could measure the properties of the atmosphere, its clouds, and its winds at different altitudes. Measurements of the atmosphere at the surface could address the weathering environment of the crust. Chemical analysis of the soils and rocks at the landing site could provide insight into the physics of and chemistry of the crust.

Two of the proposed New Frontiers missions would fly either one or two entry probe-landers to address these questions. (You can see summaries of these at this blog post.)

The VOX proposal takes an entirely different approach. As the abstract states, “At the time of the Decadal Survey the ability to map mineralogy from orbit and present-day radar techniques to detect active [surface] deformation were not fully appreciated. VOX leverages these methods and in-situ noble gases to answer [the key] New Frontiers science objectives.”

The key elements of the VOX proposal closely resemble the VERITAS mission that was a finalist for the last Discovery program mission but not selected (losing out to the Lucy and Psyche asteroid missions). The principal investigator for VERITAS and VOX are the same, Suzanne Smrekar at the Jet Propulsion laboratory. The core of the VERITAS proposal was an orbiter that would carry a modern radar instrument to remap Venus and a spectrometer to measure the surface composition and study key aspects of the atmosphere. If selected, the VERITAS mission team was considering proposing a small atmospheric probe call Cupid’s Arrow to toe-dip into the atmosphere to make key composition measurements. A version of that probe now called the Atmospheric Sample Vehicle (ASV) would be included in the VOX mission.

The VOX orbiter would use three instruments to globally study Venus:

A radar instrument would image the surface at 15- to 30-meter resolution, map elevations to refine topography measurements, and search for minute changes in surface elevations to look for evidence of current volcanic or tectonic activity. The improvements in resolution for each of these would be one to two orders of magnitude better than those made by the Magellan orbiter in the 1990s.

The Venus Emissivity Mapper (VEM) would use spectral bands in five near-infrared wavelengths where the atmosphere is transparent to map the surface composition. Measurements in additional bands would study cloud structure and the presence of water vapor in the lowermost atmosphere. 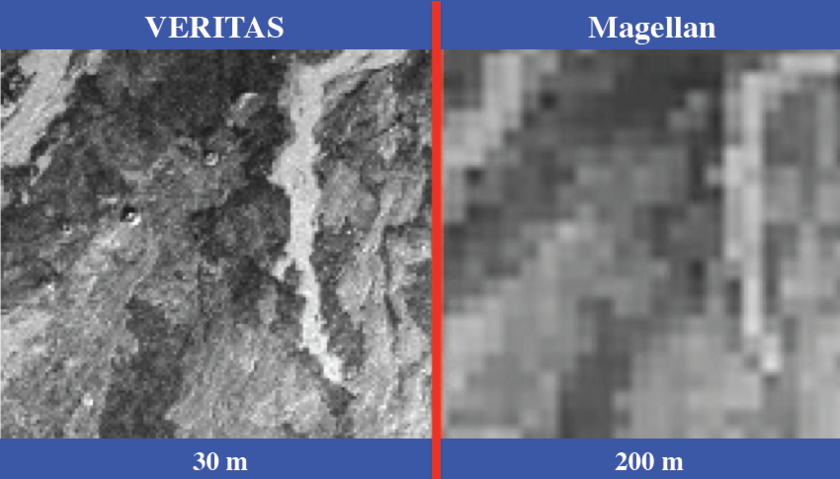 These images, derived from radar imaging of Hawaii, show the improvement in resolution possible with modern radar systems compared to the data returned by the Magellan mission. This image is from a poster describing a 2012 JPL VERITAS mission that was proposed for the NASA Discovery program. The VOX mission would carry the same radar instrument. 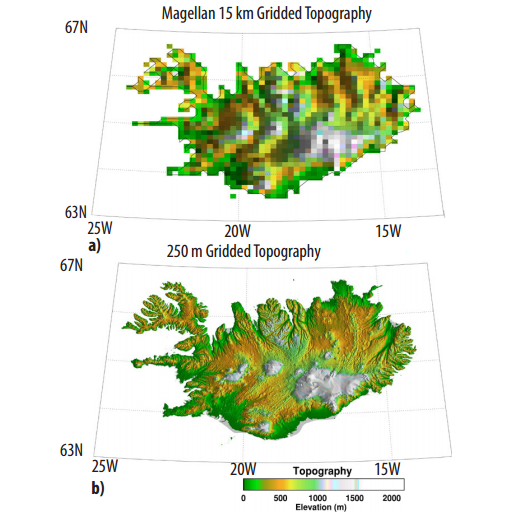 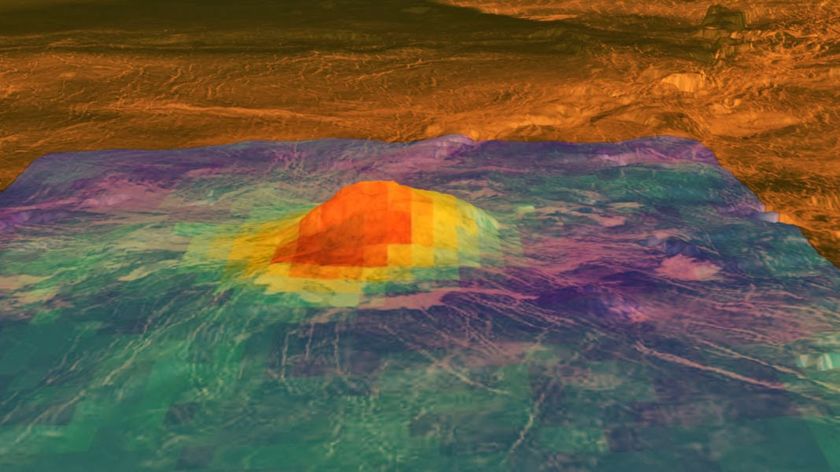 The ASV would be a small probe released from the orbiter. The probe would enter and briefly traverse the upper atmosphere where it would collect a small sample of the gases present before its momentum carries it back into space. Once back above the atmosphere, a miniaturized mass spectrometer would measure the composition of key gases and their isotopes. By only toe-dipping into the atmosphere, the probe doesn’t need protection from the crushing pressures and extremely high heat on the surface that the atmospheric probes of the other New Frontiers Venus proposals require. 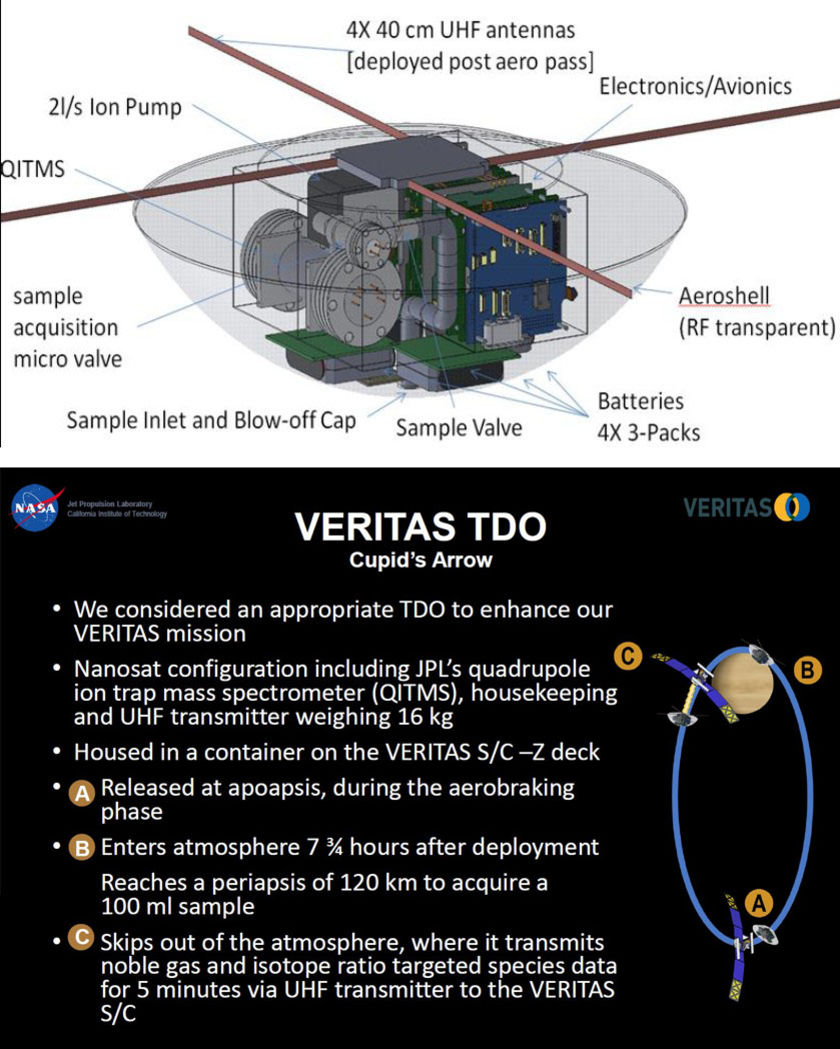 The VOX mission's Atmospheric Sample Vehicle would be based on the Cupid Arrow probe concept.

While the VOX mission is in competition with the two Venus entry probe-lander proposals (and nine other proposals for other solar system destinations), in many ways it is a compliment to those two missions. Within the column of air in which they descend and in a square meter or so at their landing sites, the two proposed entry probe-lander missions would make much more detailed measurements than VOX’s radar and VEM instruments would from orbit for the same location.

The VOX spacecraft’s instruments, however, would make those measurements over the entire planet over at least three years (and possibly much longer in an extended mission). The VEM instrument, for example, could look at the surface of every volcano on Venus searching for the presence of minerals suggesting recent lava flows. The radar images could show whether the features on the surface are consistent with new flows. Radar interferometric measurements could look for small surface deformations that could reflect surface movement from earthquakes associated with eruptions or swelling from underground lava movement. VEM measurements of the atmosphere could look for changes in water vapor associated with volcanic outgassing. And the gravity field measurements would tie each volcano to the interior structure below the surface.

The VOX mission would make comparable studies for all the surface types on Venus as well as monitor the lower atmosphere. Perhaps most important of these would be observations of the tessera, which are continent-sized highlands that likely are the oldest surviving surfaces on the planet. For these, the synergy of composition measurements, surface imaging, and interior structure measurements could reveal key aspects of the earliest history of Venus including the role of liquid water and other volatiles in the then cooler times.

In one set of measurements, the VOX and the two Venus entry probe-lander missions are in direct competition. In much the same way as strata of rock record geologic history, the presence and abundance of key gases and their isotopes record the origin and evolution of the atmosphere. Because the Venusian atmosphere is in contact with the surface, it also records key geological events. Measurements of xenon and its isotopes, which have yet to be made at Venus, for example, would resolve key questions about the origins of the atmosphere. Xenon measurements also would reveal the total amount of degassing from the planet’s interior, which reflects the cumulative volcanic activity. Similarly, a long-lost ocean at Venus would be reflected in the ratio of hydrogen isotopes.

The US Pioneer Venus and Soviet Venera entry probe and landers carried now-antiquated mass spectrometers that could not make key composition measurements such as the isotope ratios of xenon. The VOX mission’s atmospheric probe would deliver a modern mass spectrometer to Venus that would answer the key first order atmospheric composition questions. The other two proposed Venus missions would carry much more sophisticated instruments that could also address second and third order questions. By descending all the way to the surface, the probes on these other missions would also study changes in composition at different layers of the atmosphere and look for compounds that reflect the current weathering at the surface.

(As a side note, I’ve been following proposals for missions to explore the solar system for several decades now. Cupid’s Arrow, and its incarnation as VOX’s ASV, is in my opinion one of the cleverest solutions I’ve seen to addressing a key set of planetary science questions at a fraction of the cost of much more capable entry probes like those that would be the core of the other two Venus proposals.)

To understand Venus, eventually it’s not a question of a VOX-like mission versus entry probe-lander missions. Their capabilities are complimentary – in depth at one or a few locations versus broader measurements across the entire globe across a number of years. The interpretations of measurements from orbit, especially those of composition, would greatly benefit from ground truth measurements on the surface. Eventually, we need both types of missions to fly. (And there’s also an entire branch of Venus science focused on global atmospheric studies from orbit that neither of these types of mission addresses.)

In the last New Frontiers competition, a Venus entry probe-lander was a finalist but lost out the OSIRIS-REx mission now in flight to return a sample from the asteroid Bennu. For the current Frontiers competition, NASA will select just one mission from among three proposals for Venus, one to return samples from the moon, three to return samples from a comet, and four to study Saturn or its moons. It’s a tough field. By the end of this year, we’ll learn whether VOX is selected as a finalist in the current competition with the final selection planned for 2019.

Appendix: Here is the full list of studies proposed for the VOX mission from the conference abstract:

2. Past hydrological cycles: global tessera composition to determine the role of volatiles in crustal formation.

4. Crustal weathering: surface-atmosphere weathering reactions from redox state and the chemical equilibrium of the near-surface atmosphere.

"...the United States has lost the technology to build probes capable of entering Jupiter’s atmosphere." How is this possible? Or did you not mean 'lost' ?

I was wondering the exact same thing!

I presume it's simply the issue that over time, you lose your manufacturing base - old tooling for old parts shuts down to be replaced by new tooling for new parts, old companies go out of business, etc. Same reason why it makes no sense to rebuild Saturn V today.