In the several years I've been writing this blog, I've seldom written about the Russian planetary program as a whole. I've written about individual missions but I've not put all the pieces together since 2009.

A request from a reader and the quiet announcement last month that NASA and its Russian counterpart Roscosmos are investigating options for joint Venus missions piqued my interest.

For much of my information on the Russian space program, I have depended on writer and space historian Anatoly Zak and his RussianSpaceWeb.com. 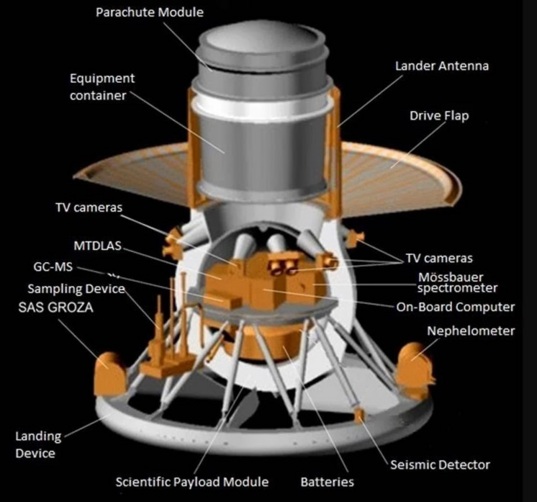 Fate has not been kind to the Russian planetary program since the breakup of the Soviet Union. Its Mars-96 mission was lost during a launch failure. Then in 2011, the Phobos-Grunt mission was lost after it failed to respond to commands following launch.

Since then, the Russian program is following a two-pronged approach to rebuild its planetary program. For this decade, it is planning a series of solo lunar missions to build up its own design, testing, and operations capabilities. Simultaneously, it has built a partnership with the European Space Agency (ESA) to explore Mars. The earliest explorations of a potential partnership with NASA for Venus missions have just started.

After reading Zak's web site, ESA's website, and reading a number of news accounts, what follows is the best picture I've been able to put together of Russia's planetary plans.

In partnership with ESA

From what I can tell, these missions are concepts and not approved or funded missions. Launch dates therefore are likely to be notional for planning purposes rather than commitments.

This is an ambitious list, especially for the early 2020s. Zak reports that the numbers of engineers and scientists to build, test, and operate these missions are small. Russia is enhancing the impact its resources have through partnerships with other space agencies. Still, several of the concepts seem likely to be dropped unless Russia invests substantially more resources to its program.

Russia and ESA have signed agreements that make Russia a substantial partner in both of ESA's Mars missions this decade. Russia will make crucial contributions to both ExoMars missions:

Russian-supplied instruments for the orbiter:

Russia to provide entry and landing system with ESA contributions

Russian-supplied instruments for the rover:

[previously, a 3rd instrument, a laser spectrometer was listed as a Russian instrument but is not currently listed on ESA's ExoMars webpage]

Russia will need to develop substantial new capabilities to land the large 2018 ExoMars rover. It previously has not landed a large planetary probe on any world except on the very different Venus (and then as part of the Soviet Union series of landers that ended in 1986). ESA plans to share the technology it develops from its planned 2016 demonstration lander with Russia.

Russia has previously discussed using the 2018 ExoMars landing stage as a long-lived weather and geophysical station. I have not seen any discussion of this recently. If this does happen and the station has a seismometer, joint seismological studies with NASA's InSight mission could be done to improve upon the science either instrument could do on its own.

In addition to Mars missions, managers for the European and Russian space agencies have stated that they are discussing Russian participation in ESA's JUICE Jovian system-Ganymede orbiter mission. Russia could contribute the launch vehicle and in return be provided payload space for instruments on the JUICE orbiter or for a small Ganymede lander. 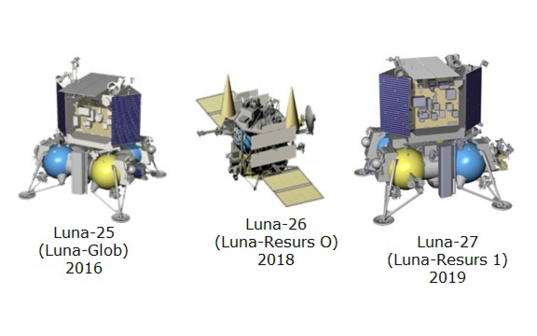 Russia has been planning a series of missions to the moon for about the last 15 to 20 years. More recently, the planning included a partnership with India that was dropped following the Phobos-Grunt mission's failure. Since 2012, a series of three Russian-led only missions have been planned. An ESA website announcing Russia's interest in European scientist participation in the missions provides the best summary I've found of the current plans:

Luna-25 is a small technology [demonstration] lander with a limited payload, which will target a high latitude [near polar] landing side in the southern hemisphere on the near side.

Luna-26 will be a polar orbiting spacecraft which will operate from one year at 100 – 150 km and then for 2 years at 500 – 700km altitude, providing communications relay capabilities for missions which follow.

Luna-27 is a larger lander with an enhanced payload capability. The mission will have near polar landing site in the southern hemisphere, targeting frozen volatiles in the sub surface.

Since 2012 the launch dates for these missions have slipped to the dates shown above. Zak's website states that resources to develop these missions may be scarce: "Even these postponed launch dates remain far from being guaranteed, because lunar missions alternate in the flight manifest with two joint Russian-European launches to Mars, which themselves face a considerable time pressure but have a much better chance of getting the priority in development due to their international nature. (Many aspects of the Russian planetary exploration program are developed and supported by the same institutions with a relatively small team of scientists and engineers, limiting parallel work on multiple projects.)." Zak concludes, "Luna-Glob is currently scheduled to lift off in 2015 or 2016, but could be easily postponed by months or even years to complete its development."

Venus missions were a major success for the Soviet Union's planetary program. For the last decade, Russia has been investigating options for a return to Venus known as Venera-D.  All versions of the plans I've seen have included a short-lived (few hours) lander and an orbiter. Various versions have also included balloons for atmospheric studies. Currently, a possible date of 2024 is shown for a mission with a single large, short-lived lander, a small lander that would survive a day, and two orbiters.

Towards the end of December 2013, NASA quietly announced that it was seeking scientists to study requirements for a possible joint US and Russian Venus missions "undertaking complementary and coordinated missions to Venus using the 2021-2023 launch opportunities." The potential scope of the missions was left vague. The US Venus mission concept referred to in the announcement was a particularly ambitious plan that included a large, capable orbiter, two balloons, and two large, short-lived landers. Presumably, the US contribution under discussion would be much less ambitious, perhaps a smaller orbiter, a balloon, or a lander. (It's not clear, however, where NASA would find the funding in its planetary program for its contribution.)

Numerous studies have looked at the types of missions needed to advance Venus exploration, and they have concluded that concurrent and synergistic orbiter, balloon, and lander missions would be ideal. By cooperating, Russia and NASA could potentially substantially enhance the scientific return beyond what either could accomplish alone.

Other Concept for Future Missions

Like the failed Phobos-Grunt mission, the Boomerang Phobos mission would return a sample from the Martian moon.

The Ganymede lander study is for an ambitious orbiter and soft lander mission that would be similar to a concept previously studied for a Europa orbiter and lander (see summary here). NASA studied a similarly capable Europa lander and concluded that it would be a highly complex mission.

With the news today that Ceres might have plumes like Europa and Enceladus, Ceres just got more interesting : http://news.discovery.com/space/asteroids-meteors-meteorites/water-plume-unequivocally-detected-at-dwarf-planet-ceres-140122.htm http://www.esa.int/Our_Activities/Space_Science/Herschel/Herschel_discovers_water_vapour_around_dwarf_planet_Ceres I imagine Ceres as an hybrid between Europa and Mars. Unlike these two, it is relatively easy to land on and to take off, due to the low gravity. Hopefully, especially after Dawn's data, we might see an inclusion of rovers and even sample return missions to Ceres in Russia and China program.

Great news! The Russian space program is maybe an underestimated underdog because of the failed Mars missions 1989, 1996, 2011. Landing on a Jovian moon, that's spectacular! And they do operate the largest space telescope, the interferometer RadioAstron, they just don't get much attention for the general public. Ceres might be a captured Kuiper belt Object. A Titan/Europa/Enceladus type world which happens to be nearby and handy to explore.

The Russians are really good at getting to and landing on Venus. It must be in part due to their metallurgy skills (think closed-cycle engines). I can't think of anything cooler than Russia going back to Venus and surviving however briefly. Okay, maybe going back to Titan, but that takes forever....

The Russians need to do more in depth testing with a flight article to see if their designs at all levels, really work as designed. If so then build and fly the next in production spacecraft. That testing should include the spacecraft on the flight article stage for communication testing. Rolling the stack on a turn & tiltable table would be a good way to start.