While we were in New York for the International Solar Sailing Symposium last week, we held a meeting with the Japanese IKAROS team to discuss technical results and issues in our two projects. Chris Biddy and Matt Nehremz from Stellar Exploration, Bill Nye and I met with Jun Kawaguchi, Osamu Mori and their Japan Space Exploration Center team. Although our two spacecraft and their sails are very different, there were many valuable lessons for us to learn about the sail deployment and dynamical behavior. 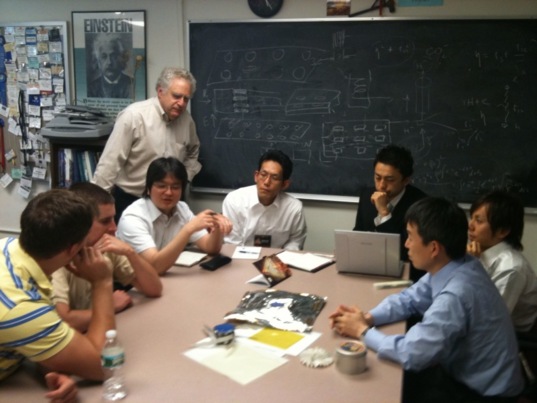 At the International Solar Sailing Symposium in New York in July 2010, members of the LightSail and IKAROS teams meet to compare notes.

In addition to the technical discussions we also held a public event on Wednesday evening, which received some very good press coverage by Discover. This month's issue of The Planetary Report has both an update on our LightSail and a report on the IKAROS mission.

IKAROS has achieved successful controlled solar sail flight. Having now carried out both the attitude control (turning the spacecraft) and the modification of its trajectory due to the force of solar pressure, IKAROS has achieved complete mission success. It has also advanced the technology of both solar sails with its spinning spacecraft and of space solar power generation with the use of lightweight, flexible solar cells in the solar sail. The next step will be that of The Planetary Society's: using the nanosat technology to develop the ultra-light solar sail spacecraft of the future.