This Saturday, SpaceX will attempt to make history by launching the first commercial spacecraft to berth with the International Space Station. The flight will demonstrate the Dragon spacecraft’s readiness to begin official cargo runs to the orbiting laboratory. NASA has signed off on twelve resupply flights, which could begin later this year. But before that happens, SpaceX has to prove their vehicle is up for the challenge. 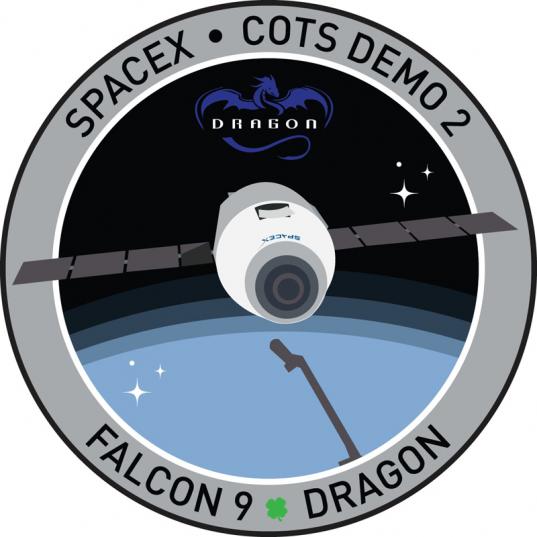 It has been six years since NASA began accepting proposals for their Commercial Orbital Transportation Services (COTS) program. A press release at the time challenged private industry to "open new space markets and support the crew and cargo transportation needs of the International Space Station." SpaceX’s May 19 flight, scheduled for a 4:55AM EDT (8:55 UTC) liftoff, marks the culmination of NASA’s efforts to pass the banner of low-Earth orbit cargo services from the space shuttle program to the commercial spaceflight industry.

The Falcon 9 rocket and Dragon capsule have not flown since their first demonstration flight in December 2010, during which the Dragon became the first privately-built spacecraft to orbit the Earth and return to the ground intact for recovery. To date, only the governments of the United States, Russia and China have accomplished this feat.

Private spaceflight has been at the heart of differing opinions regarding U.S. space policy. SpaceX has become the most visible symbol of the burgeoning industry, and the outcome of this flight will likely be used as a talking point for stakeholders on all sides of the debate. But despite the clenched-teeth excitement surrounding the launch, the flight remains a demonstration of the Dragon’s ability, not an official cargo run. 520 kilograms of food and supplies are going up, and 660 will come down, none of which are mission-critical should the flight end in disaster.

Commercial Orbital Transportation Services Demo 2, or COTS 2, combines a list of SpaceX objectives that were originally slated to take place during two separate flights, with berthing not scheduled until the second (COTS 3). However, last year, SpaceX approached NASA about the possibility of combining the missions, and the space agency agreed.

Before proceeding, SpaceX had to overcome ongoing issues with the Dragon capsule’s software testing and validation. NASA and its International Space Station partners have to be assured that the Dragon will respond properly in the event flight controllers order it to stop its approach. Additionally, SpaceX alluded to their own concerns that the Dragon might call for an abort when one was not necessary.

Launch activities get started the previous evening on May 18, as the Falcon 9 is prepared for flight. The launch window of 4:55AM EDT (8:55 UTC) is an instantaneous launch window, meaning any delay in the count forces a scrub, with the next launch window occuring three days later. Why such narrow constraints? The Dragon will be consuming a lot of propellant as it performs its space station flyaround and demonstration maneuvers. SpaceX wants to launch only at times that will minimize the amount of fuel required to catch up with the International Space Station, which completes an orbit around the Earth every 90 minutes.

Your correspondent plans on waking up around 4:30AM EDT on May 19 to watch and live Tweet the historic event. I also plan on posting live updates to my blog throughout the weekend as the mission progresses.

Here is the current mission timeline. This information comes from SpaceX’s press kit, and is subject to change.

On orbit operations/initial demonstrations in the far field

Japan recovered Hayabusa intact. And ESA recovered the ARD intact; technically, it did not complete an orbit, but then again Hayabusa did not literally orbit Earth either. Oh, and the Aerospace Corporation successfully flew their REBRs. It wasn't recovered... because it's not supposed to.