SpaceX’s Dragon spacecraft completed a successful fly-under of the International Space Station this morning at 7:24AM EDT (11:24 UTC). From a distance of 2.5 kilometers beneath the ISS, the commercial capsule could be seen as a dark shape against the blue-white backdrop of Earth, its two solar arrays occasionally glinting in the sunlight. 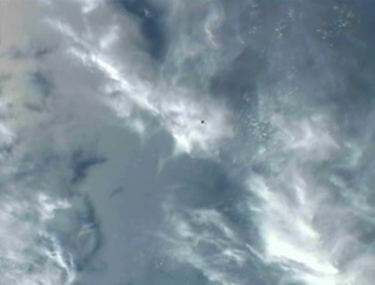 In this screencap from NASA TV, the Dragon spacecraft and its solar arrays can be resolved from the International Space Station. The Dragon flew under the ISS at a distance of 2.5 kilometers.

Expedition 31 crew members aboard the ISS were able to use the CUCU (COTS UHF Communication Unit, pronounced “cuckoo” ) to activate a strobe light on the Dragon, verifying the vehicle’s ability to receive commands from the station. At a press conference this morning, SpaceX mission director John Couluris reported the CUCU maintained its link with the ISS out to a distance of 90 kilometers, far above design specifications. Couluris also said that the Dragon has 36 kilograms of surplus propellant in its tanks.

NASA posted a video of a portion of the fly-under. It marked the first time the Dragon was photographed in Earth orbit by another vehicle:

The Dragon will fly back above the ISS today, eventually positioning itself behind and beneath the station in preparation for tomorrow’s berthing attempt on flight day four. Coverage begins on NASA TV at 2:00AM EDT (6:00 UTC).

The activities begin with Dragon closing on the station and passing through a series of checkpoints:

The station’s radial bar, or R-bar, is an imaginary line connecting the ISS to the center of the Earth. The Dragon will approach the station on this path and must pass another round of checkpoints before it is permitted to berth. 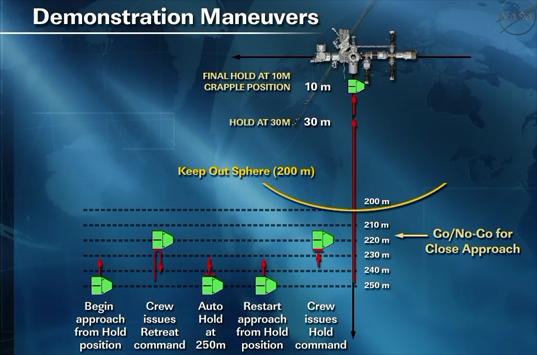 The R-bar events are as follows (EDIT: I have seen varying timelines posted for the capture and berthing, so this may change):