The stage is set for China’s space program to make history this weekend, as it prepares to send three taikonauts to visit Tiangong-1, the country’s first space station. One crew member is expected to be female: another first for China. The launch is scheduled for this Saturday, June 16, when a Long March 2F rocket sends Shenzhou-9 into orbit. After docking with Tiangong-1 a few days later, the crew is expected to spend ten days aboard the station before returning to Earth. 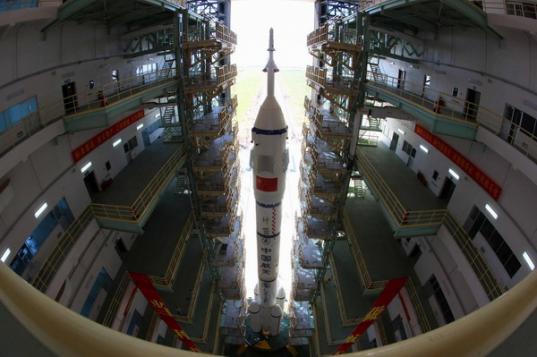 The Shenzhou-9 spacecraft rolls out to the launch pad atop its Long March 2F rocket on June 9, 2012. The three-person crew will include China's first female taikonaut, and will visit the country's Tiangong-1 space station.

CNSA -- the China National Space Administration -- handles crew selection differently from NASA missions, where prime and backup crews are designated far in advance. Instead, the Chinese Ministry of Defense says that while two crews train for a mission, the prime and backup designations are not named until a few days before launch. This explains why we still don’t know for sure who China’s first female taikonaut will be (both crews include a female member).

Despite the official silence coming from CNSA, the Chinese space blog Go Taikonauts! reports it is likely that the prime crew will consist of Jing Haipeng, Liu Wang and Liu Yang. The backup crew, in that case, would be Nie Haisheng, Zhang Xiaoguang and Wang Yaping.

Both Liu Yang and Wang Yaping are extremely competent choices to make the historic flight, according to an article by Indonesian newspaper The Jakarta Post. Both women are air force pilots, and have track records of courageous flying. Liu survived a harrowing bird strike in which her plane’s engines ingested at least twenty-one unfortunate pigeons, and Wang is known for having flown seven straight days and nights of rescue missions during the 2008 Sichuan earthquake. 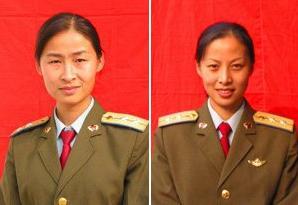 File photos of China's two female taikonaut candidates Liu Yang(left) and Wang Yaping(right). One is expected to join the three-person Shenzhou-9 crew, which will visit the country's Tiangong-1 space station.

If Shenzhou-9 launches this Saturday, it will be exactly forty-nine years to the day since Valentina Tereshkova became the first woman in space on June 16, 1963. The launch -- China’s fourth human spaceflight mission -- will take place at the Jiuquan Satellite Launch Center in the Gobi Desert, seen here:

The Long March 2F launch vehicle has two core stages and four add-on boosters; all use hypergolic liquid propellants (meaning they ignite on contact). Tiangong-1 was launched into orbit last September aboard a Long March 2F variant, and was visited a month later by uncrewed Shenzhou-8, which successfully docked with the station before returning to Earth. Tiangong-1 has a pressurized volume of 15 cubic meters, and Chinese news sources report it contains two sleep stations (someone has to sleep in Shenzhou-9), exercise equipment and high-resolution video links to ground controllers.

What specific activities the taikonauts will do during their stay is mostly hush-hush, but one widely-mentioned experiment involves hatching butterflies in space. Tiangong-1 is a testbed for technologies China will strive to master before constructing a multi-module space station later this decade.

Heavens Above currently shows China’s space station on a 42.7-degree inclined orbit, with a perigee of 320 kilometers and an apogee of 335 kilometers. By comparison, the International Space Station orbits at a inclination of 51.6 degrees between 391 and 405 kilometers. Depending on your location, there may be opportunities to see Shenzhou-9 approaching Tiangong-1 from the ground; check Heavens Above for sighting opportunities from your location.