The International Space Station is back to a six-person crew for the holidays following the arrival of NASA astronaut Tom Marshburn, Canadian Space Agency astronaut Chris Hadfield and Russian Federal Space Agency cosmonaut Roman Romanenko. Hatches on the station's Rassvet module were opened at 11:37 a.m. EST (1537 UTC) as the station cruised silently over the South Pacific. 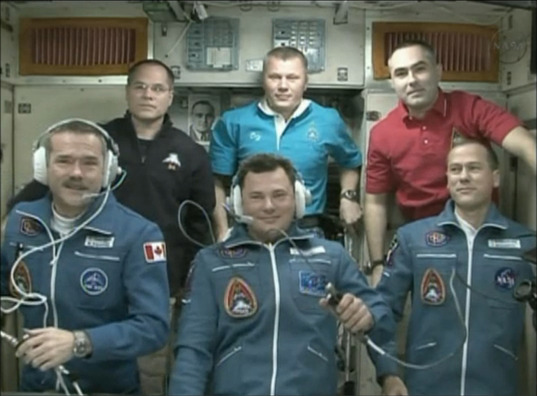 The second half of Expedition 34 began with a chilly Wednesday launch from Baikonur, Kazhakstan at 6:12 p.m. local time (7:12 a.m. EST, 1212 UTC). Temperatures hovered around zero degrees Fahrenheit (minus 17 degrees Celsius) at liftoff, with wind chills as low as minus 30. Once in space, the Soyuz capsule closed on the orbital outpost for two days, docking Friday morning at 9:09 a.m. EST (1409 UTC) over Northern Kazhakstan.

Expedition 34 lasts through March 2013, when Ford, Novitskiy and Tarelkin return to Earth. At that point, Chris Hadfield will take command of the station, marking the first time a Canadian has been in charge of the ISS.