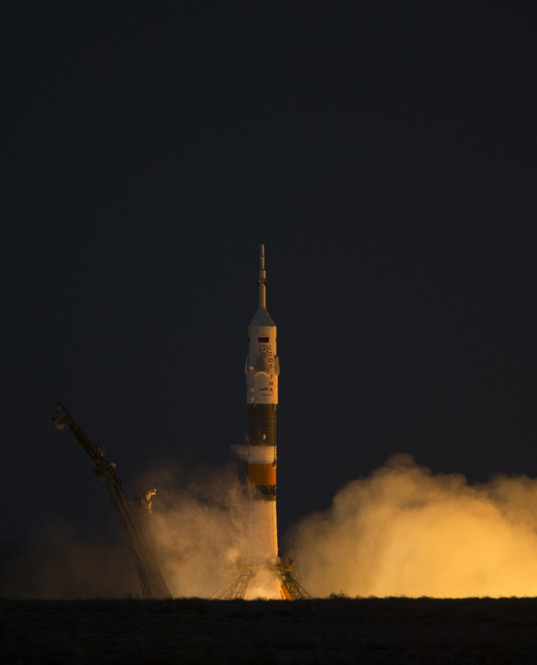 A Soyuz rocket carrying the crew of Expedition 34 lifts off from Baikonur on Wednesday, December 19, 2012.

The crew's arrival will commence the second half of Expedition 34, which began November 18 and lasts through March 2013. This is Marshburn and Romanenko's second spaceflight, and Hadfield's third. Hadfield will take command of the ISS for the first half of Expedition 35 when Ford, Novitskiy and Tarelkin depart, marking the first time a Canadian astronaut has been in charge of the orbiting laboratory.

"I want to come back with a healthy space station, and having done as much of the science as we possibly could in our six months on the station."

Hadfield flew on space shuttle Atlantis in 1995 as a mission specialist for STS-74, which attached a docking module to Russia's Mir space station. He was the first Canadian to operate the shuttle's famed Canadarm in orbit. In 2001, he served as a mission specialist once again on shuttle Endeavour during  STS-100, helping install Canadarm 2 on the ISS. He became Canada's first spacewalker during the first of two spacewalks.

During this ISS visit, Hadfield and the Canadian Space Agency will test a miniature red blood cell-counting device called Microflow. Despite all of the human physiological research that has taken place over the years on the station, scientists have never had a practical method to count cells in blood and fluid samples. Such Earth-bound devices are bulky, but Microflow -- a small, portable box -- is intended to change that.

NASA astronaut Tom Marshburn flew aboard space shuttle Endeavour in 2009 during STS-127, which completed construction of the Kibo Japanese Experiment Module. Kibo is currently houses some other station residents: Medaka fish, part of an experiment to study the process through which astronauts lose bone density. The Medaka are being periodically removed from their tank and sealed for return to Earth, where they will be dissected to see how their bone density changed over time.

Additionally, some Medaka have been genetically modified so the cells responsible for growing and breaking down bone material -- osteoblasts and osteoclasts -- glow different colors. Medaka have very transparent skin, making them ideal for direct observation by the crew. 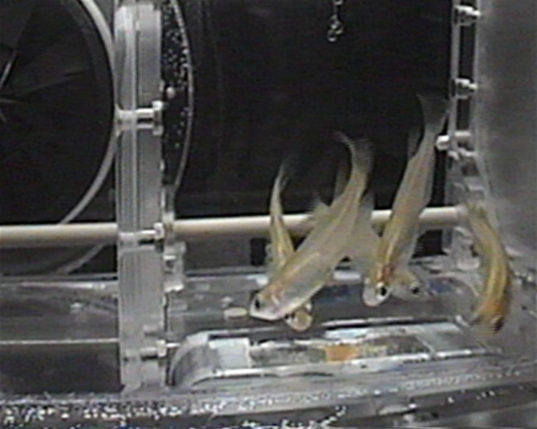 A school of Medaka fish aboard the International Space Station.

Marshburn is looking forward to working with international scientists during his ISS stay.

"There’s enough similarity in every country: Canada, in Europe, for all the international partners in the European Space Agency, and Japan and in Russia, and we’re able to communicate very well and they’re excellent teachers," he says to NASA.

"It’s fun when we all get excited about what their experiment’s doing, and it kind of knocks down international barriers. It’s really cool."

Cosmonaut Roman Romanenko (last name pronounced "Roman-Yenko") will be making his second trip to the station. In 2009, he logged an extended stay during Expeditions 20 and 21. 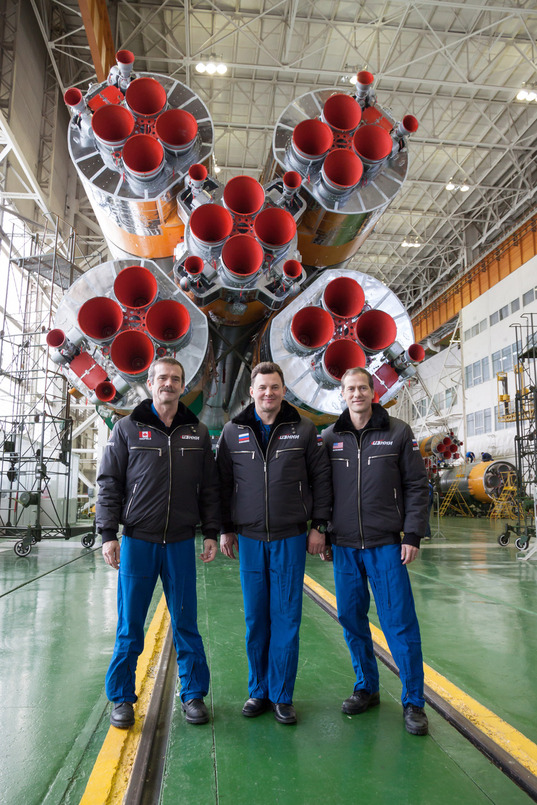 The crew of Expeditions 34 and 35 pose behind the business end of the Soyuz rocket that will launch them into orbit. From left: Chris Hadfield, Canadian Space Agency; Roman Romanenko, Roscosmos, Tom Marshburn, NASA.

The crew will also be working on a European Space Agency experiment to see how surfactants -- substances that lower surface tension -- work in microgravity. You can try a similar experiment at home by grinding pepper into a bowl of water, and adding a drop of detergent.

I really appreciate it that the Planetary Society covers human spaceflight news with this article also. Manned and unmanned spaceflight (should) go hand in hand!

As a Canadian, I also appreciate that the Planetary Society covers this news featuring one of our CSA astronaut! Thanks,