Scientists would like your help staring at high-resolution images of the Andromeda Galaxy captured by the Hubble Space Telescope. Interested?

The Andromeda Project is a citizen science effort led by the University of Washington to identify star clusters in M31, the Andromeda Galaxy. Participants look at image slices in their web browsers and circle star clusters and galaxies, while crossing out photo anomalies and foreground stars in the Milky Way.

The orange and blue starfields come from PHAT, the Panchromatic Hubble Andromeda Treasury. PHAT is an ongoing, four-year program started in 2010 that aims to capture one-third of M31 in six wavelengths from ultraviolet to near-infrared. The treasury will eventually resolve 100 million individual stars. If you're feeling adventurous, you can download raw PHAT data yourself. 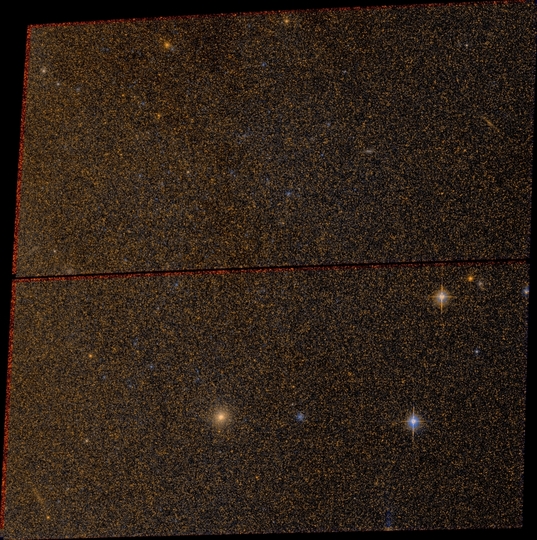 A slice of the Andromeda Galaxy captured by the Hubble Space Telescope's Advanced Camera for Surveys. This image comes from brick nine of PHAT, the Panchromatic Hubble Andromeda Treasury, and shows a portion of M31 about halfway between the core and outer region. The bright cross-shaped stars are in the Milky Way, and some of the fuzzy patches are other galaxies behind M31.

Researchers think there may be as many as 2500 star clusters hiding in the Hubble data, but only 600 have been identified thus far. Star clusters are tough for computer algorithms to identify, so human eyes are needed for assistance.  A map of Andromeda's star clusters will help astronomers learn more details about how M31 -- and other galaxies -- were formed.

There are already quite a few citizen space science projects: Moon Mappers, Planet Hunters and Solar Storm Watch are just a few that come to mind. I've never participated in any because I was skeptical my work would actually be used to produce scientific results. After all, who says I'll do a good job? What's to stop a malicious user from fouling the data?

I posed these questions to the Andromeda Project's Cliff Johnson, a Ph.D. student at the University of Washington. Johnson says his team aims to have 30 to 50 unique sets of eyes look at each of the 10,000 images.

"With that many independent votes, any single mistake (or malicious user) will not have enough influence to alter the final outcome," says Johnson in an email.

"But to be sure, we also perform analysis on the classification data to ensure that any malicious users or automated bots are removed before being used for science." 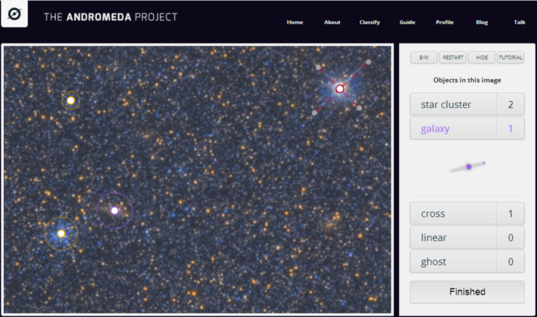 A screenshot from the Andromeda Project, showing one galaxy, two star clusters and a foreground Milky Way star.

I decided to give it a try. After analyzing about five images and circling a few star clusters, a message popped up, saying, "Congratulations, you found a synthetic cluster!"  For a moment, I was intrigued. I only knew of open clusters and globular clusters. Was this an exciting, new cluster type?

Sort of. The researchers, it turns out, drop fake clusters into the data to make sure you're paying attention. Seeing which synthetic clusters get overlooked will help reveal how well people are processing the data. Johnson says early test runs of the project show that this type of cosmic crowdsourcing produces promising results.

"The crowds already appear to be performing better than our initial work by professional astronomers. This is likely due to the fact that instead of 4-8 trained astronomers, we have almost 10x more people helping with the classification," he says.

Personally, I find the most rewarding part of the Andromeda Project comes in finding background galaxies. It's a mind-bending exercise in cosmic scale: M31 is a mere fuzzy blob when viewed through binoculars. The Hubble images resolve that blob into millions of individual stars. And then, through those stars, more blobs appear. It's turtles all the way down.

Didn't you mean to say "staring" at high-resolution images?