The OSIRIS-REx Science Team gathered at the University of Arizona in Tucson from April 22–24, 2014 for their sixth meeting. The meeting was a dynamic event and covered many aspects of both the science and implementation of the mission. In this post I will discuss a few of the highlights.

In Search of the Source of Bennu

Our science team meetings traditionally start off with a science presentation covering recent, exciting results. This time, Bill Bottke, from the Southwest Research Institute-Planetary Science Directorate led us off with a discussion of the team’s latest work to decipher the source region of Bennu in the main asteroid belt. On the OSIRIS-REx team, Bill leads the Dynamical Evolution Working Group, which is responsible for unraveling the history of Bennu.

We are interested in Bennu’s source region in the solar system to provide the ultimate context for the returned samples. Study of Bennu and its samples will tell us about the formation of her parent body in the solar nebula and planetesimal formation and other processes in the early Solar System. We are also interested in the history of her parent body after formation and what it tells us about planet formation processes and main belt evolution. Since Bennu is likely a collisional fragment of a much larger asteroid – we are interested in the formation and evolution of Bennu as a collisional byproduct. Finally, we hope to piece together the history of Bennu en route to the inner solar system and maybe someday to the Earth.

This work hints at some important, newly discovered processes for moving asteroids through the solar system. In particular, the concept of “stochastic YORP”, wherein sunlight constantly changes the spin rate and pole orientation of small asteroids, may help us explain the evolution of older, dark-asteroid families in the main belt. When this factor is included in dynamical calculations of Bennu’s history, we find that the New Polana family has a 70% probability of producing Bennu, while the Eulalia family has 30% chance. One of the most exciting aspects of the OSIRIS-REx science plan is that we will be able to test these dynamical theories using analyses of the returned sample.

After Bill’s presentation, Steve Chesley reported on the latest assessment of the density and future orbital evolution of Bennu. As I discussed in a previous post, we have recently completed an astronomical study of Bennu using the Spitzer space telescope. These results have a significant impact on our estimate of the mass of the asteroid, along with its future orbital path. This coupling is the result of the Yarkovsky Effect, in which the interaction of sunlight and subsequent emission of thermal radiation from the asteroid surface creates a small thrust that alters the asteroid trajectory.

Steve recently published a comprehensive study of Bennu’s trajectory, the Yarkovsky effect, and the inferred bulk density of the asteroid. All of these data combine to help us understand the impact hazard and calculate the probability that Bennu may one day hit the Earth.

In addition to data obtained with Spitzer, this study relied heavily on observations made using the Arecibo radio telescope. In particular, prediction of Bennu’s future orbit required precise astrometric range measurements over a twelve-year period (Bennu performs a close approach to the Earth every six years). We had data in hand from the approach in 1999 and again in 2005. The 2011 apparition, however, provided a major challenge. At this time, the power supply for the radar system at Arecibo was undergoing major repairs in Pennsylvania. The window for observing Bennu was rapidly closing. Fortunately, Mike Nolan, a member of our science team, was on site at Arecibo and personally drove the crane that unloaded the power supply and rapidly got the system back online to obtain the required data!

The result of this hard work is the most precise estimate of an asteroid orbit ever obtained. Arecibo came online just in time to provide the needed ranging measurements to Bennu. Using these data, Steve and colleagues determined the Yarkovsky drift with 0.5% precision, estimated the bulk density within 0.07 g/cm3, determined that Bennu has a macroporosity (void space) of ~40%, and made reliable Earth encounter predictions 124 years into future and 357 years into past. He has slightly revised the cumulative odds for a Bennu Earth impact, which now stand at 1 in 2700 – one of the highest for any known asteroid!

Last year I had the privilege of presenting an OSIRIS-REx mission summary to the Hayabusa2 science team. To reciprocate this kind gesture, I invited JAXA colleagues Makoto Yoshikawa and Shogo Tachibana to our meeting. Makoto provided us with an overview of the Hayabusa2 mission and Shogo discussed their sample analysis plan. The presentations were outstanding and provided our team with solid understanding of the similarities and differences between our two missions.

The good news is that, as of now, Hayabusa2 is on track for a launch later this year. I am hopeful that the spacecraft fabrication and test will continue as planned and that we can all wish Hayabusa2 a successful journey to asteroid 1999 JU3. My fingers are crossed for an invite to attend the launch (hint, hint). 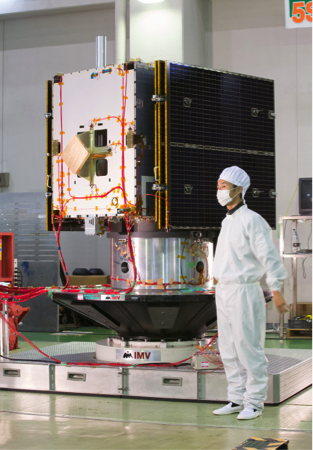 The Japan Aerospace Exploration Agency unveils the "Hayabusa2," an unmanned asteroid explorer, at the JAXA Sagamihara Campus, southwest of Tokyo, on Wednesday, December 26, 2012. Hayabusa2 is under construction for a planned launch in late 2014.

Hayabusa2 and OSIRIS-REx are closely allied missions. Both seek to return samples from a carbonaceous asteroid to better understand the evolution of organic material and the origin of life. While OSIRIS-REx seeks to return a large sample from a single site on Bennu, Hayabusa2 is seeking to return less material from three distinct sites on the surface of 1999 JU3. In addition, Hayabusa2 will deploy a small lander named MASCOT, built collaboratively by the German and French Space Agencies, for a 15-hour mission on the asteroid surface. Finally, Hayabusa2 is carrying an explosive package that will fire an impactor into the asteroid surface to produce a 5-m crater.

Overall, the bold mission planned by our JAXA colleagues impressed the OSIRIS-REx team. Hopefully, this interaction is just the beginning of a fruitful collaboration between the two missions.

The first day of the science team meeting was held in plenary, with the whole team gathered in one location. For day 2, we “splintered” into groups to focus on distinct issues relevant to subsets of the team. Our first splinter session dealt with our ability to accurately point our science instruments at specific locations on the asteroid surface. We also reviewed the data and formats of our SPICE kernels – the information system that we use to assist scientists in planning and interpreting scientific observations. Other splinters focused on the interaction of our sampling mechanism with the asteroid regolith, planning for instrument calibrations during our Earth Gravity Assist, and developing uniform formats for all of the map products that will be used for sample-site selection and studying the asteroid geology.

Another tradition of OSIRIS-REx team meetings is the evening poster session. This venue provides a great way for the team to interact with each other informally.

The range of topics presented at this session was diverse with dozens of posters presented on a wide range of science and engineering topics. The team thoroughly enjoyed this session, which was held in the Southwest Meteorite Center in the Michael J. Drake building.

I want to thank the entire team for a fantastic meeting. I am looking forward to STM07, which will be hosted by the Canadian Space Agency in Toronto this October.

Send your name on OSIRIS-REx to asteroid Bennu!