Of all the robotic eyes that people have sent out to spy on the solar system, one of my favorites is also the most humble. The Visual Monitoring Camera (VMC) on board the European Space Agency's Mars Express orbiter is sometimes called the "Mars webcam." It is not a custom-designed scientific instrument--it's a low-resolution engineering camera. Its only original purpose was to watch as a spacecraft called Beagle separated from the Mars Express mothership and headed for a landing on the planet. Sadly, Beagle was never heard from again. But the VMC remained operational, and enterprising mission managers realized they still had a most rare resource on their hands: a camera in orbit around the Red Planet.

The pictures from the Mars webcam can't compete with the images sent by the science cameras on board Mars Express and the other orbiters. Those views are revelatory in their clarity, stunning in their subtle color and texture. Meanwhile, these webcam shots can be a little fuzzy. They're marred by scratches and other visual imperfections.

But each one is like a postcard from another planet. A snapshot you might take if you got the chance to go there yourself. Picture yourself with your nose pressed against the window of your spacecraft, unable to resist the urge to snap pictures with your phone. "Look! There's Olympus Mons! I can see dust storms!"

The past few months have been good ones for Mars watchers, because in addition to riding along with the rovers and other missions, we have enjoyed a steady stream of Mars webcam pictures, which ESA has been posting regularly on a Flickr stream. There's something about the immediacy of seeing a global of view of Mars--taken that day--that creates a certain intimacy with the place.

Here I have compiled some of the most recent webcam views, all captured during July and August. I've removed some of the visual artifacts that regularly show up in these shots, and enhanced the contrast a bit.

The Visual Monitoring Camera on board the Mars Express spacecraft captured these views of the Red Planet taken during July and August 2014. Some image artifacts have been removed.

But that's not all. In April, the Mars Express team unintentionally caught a glimpse of the planet Jupiter in the webcam frame. That made them wonder what other planets they might be able to see if they carried out a planned observation. In July, they managed to get a look at one watery world in particular. 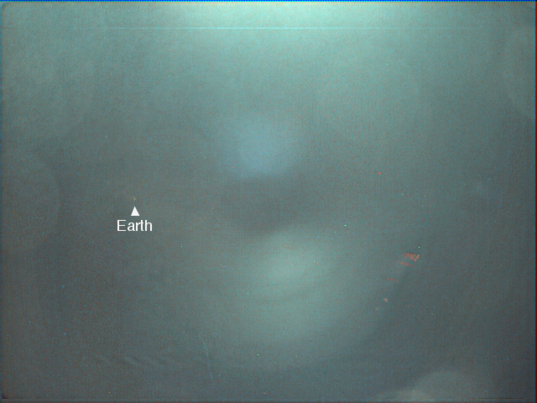 The Earth appears as a tiny star in this shot from the Visual Monitoring Camera on Mars Express. July 3, 2014.

Doing this wasn't easy. It involved a complex series of calculations to point the camera in preciscely the right direction at the right moment. In a blog post, the team outlines how they pulled it off.

As long as we're enjoying these scenes, it can't hurt to take another look at this striking sequence of images taken over the course of an entire Mars orbit. If you did make it to Mars, your view out the window might look a lot like this.

A Spin Around Mars

Frames obtained in 2013 from the Visual Monitoring Camera on board the Mars Express orbiter, combined into an animation. This sequence simulates a speeded-up view of what it would look like to ride along with the spacecraft, watching the planet spin below.

since earth is part of the solar system, I thought I might give you a heads up.... http://www.businessweek.com/news/2014-08-18/iceland-tells-airlines-volcano-beneath-biggest-glacier-may-erupt

Is there a video of Beagle separating?

Messy, Earth is my favorite planet, and things like that are a reason why. Arbitrary: http://www.esa.int/Our_Activities/Operations/Mars_Express_VMC/About_the_Visual_Monitoring_Camera_VMC

This was a fun blog! Thanks Bill! If a global dust storm pops up and this spacecraft is still viable they could be the best ones to track it's path. The meteorologists would love that data chunk I'd bet!

Better for tracking weather is this: http://www.msss.com/msss_images/latest_weather.html

Check out Phobos whizzing by in the last second of the video.