In Japanese legend, a man once found a tiny girl in a glowing bamboo stalk. After he raised her as his own daughter, one day she broke his heart when she revealed herself to be a princess from the capital of the moon, and announced she had to return home.

She gave her name, Kaguya-hime, to a lunar orbiter launched six years ago this month by the Japan Aerospace Exploration Agency (JAXA). The mission returned volumes of valuable data, not to mention some of the most amazing video and images sent by any space mission in history.

The Kaguya lunar orbiter sees the Earth as the spacecraft passes beneath the south pole of the moon. Africa is visible at the right.

The mission inspired a fascinating multimedia project called Moonbell. This interactive display uses data from Kaguya's laser altimeter, transforming a detailed map of the moon's topography into into musical notes and cadence. Moonbell users can choose virtual instruments to play the main notes, representing detailed altitude data, the mid notes, taken from broader topographical information, and the base notes, which follow the average altitude of the lunar landscape. Moonbell will play the resulting celestial music as read from sequential data along Kaguya's orbital track, or in Free Scratch Mode users can actually draw a line anywhere on the moon's surface and listen to the sound it produces, like dropping a needle onto a vinyl record. 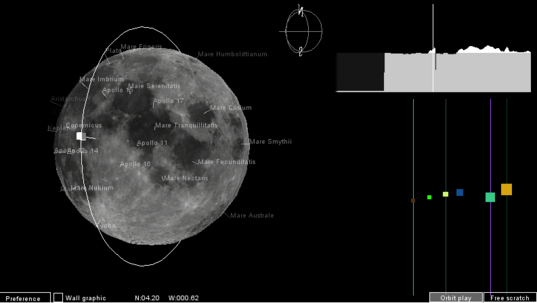 The Moonbell interactive widget transforms altimeter data from the Kaguya lunar orbiter into music "composed" by the moon itself.

After more than a year of successful work at the moon, the Kaguya mission came to end. Controllers lowered its orbit until it was barely skimming over the gray surface, sending home video and other data until the very end. Finally, on the eleventh of June, 2009, the spacecraft impacted the surface near the south pole.

Here is one of the very last things it saw, a crater partially covered in the polar region's long shadows. 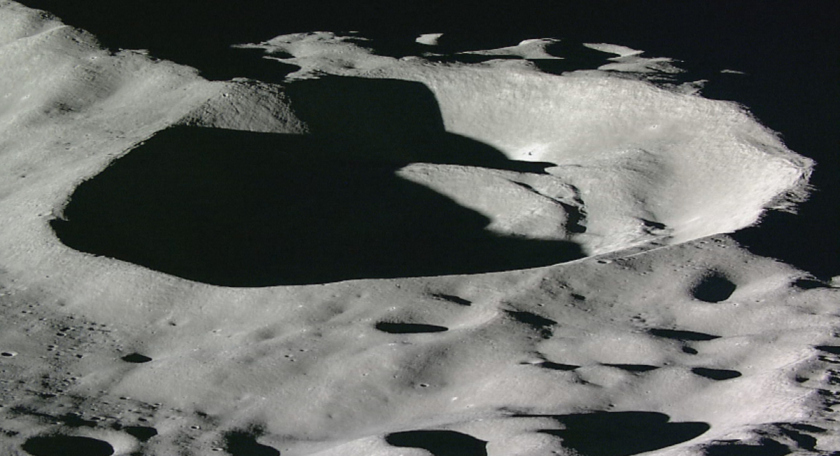 Just moments before it impacted the surface, the Kaguya lunar orbiter snapped this view of a crater near the south pole.

Kaguya didn't simply return flat pictures. The very data that made Moonbell possible also allowed explorers to construct 3D models of the terrain by combining visual and altitude data. The following video represents some of the very last of that data, a view of what it would have looked like to ride along with Kaguya as it was pulled down towards its final, permanent encounter with the world it had been exploring all those months.

The final 3D model based on the last observations by the Terrain Cameras on board the Kaguya lunar orbiter, just a few minutes before the controlled impact that ended the mission. June 11, 2009. Credit: JAXA.

Moonbell provides yet another way to experience that south polar terrain, the site of Kaguya's final journey. Drawing a path in Moonbell similar to the one the spacecraft followed during its last orbit, I made a few moments of music "composed" by the moon itself (.mp3 format).

Like its namesake, Kaguya remained on the moon and never returned, but not before gifting us with its swan song of knowledge and images that will be remembered for a very long time.

Wow! Thanks for posting this.

What gorgeous photos; Truly brings the moon within an average human's perspective..!

Will one of these rovers ever take a picture of the flag that we put on the moon? It would just confirm our place there and let those who doubt we ever landed there know that we did??

I just saved these photos for my computer background. Felt like I was flying over on that video.

Glad I wasn't committed to a final approach at that sight!

It will be fascinating to see what we do with the moon over the long run. Thanks for the fascinating photos and video.

Thank you so much. What a great video. Since we will never get to go to the moon (I mean us the viewers) this was maybe the next best thing. I felt like I was riding on that probe like Slim Pickings rode that nuclear bomb in the movie Dr. Strangelove ! What a privilege to view this video. Awesome !!!

do it is a scientific research vessels it was crashed as trash on a dark side as to hide it from view. Man must be responsible for all the future a landing on a ligthted area would have been the most responsible act for future generations. All those brains an we still polute . How much is it going to cost my grandkids to clean you're mess.

Cool stuff... wouldn't it be nice if NASA would use another Curiosity clone like the one slated to fly to Mars in 2020 to investigate the surface of our closest neighbor? It could blast the putative ice of the moon's always-dark polar craters with its laser and dialog with Earthbound controllers in near real-time. We should have a "factory" to churn out such planetary explorers en masse on the cheap in stead of as one-off's that cost a $ billion plus per copy.

utterly amazing to see such wonderful shots of the moon. Carry on with the good work. wonder if we ever will go to the moon again?

Great images & a fantastic video to boot! Thank you ever so much for making this video available for all to see. One really did get the sensation of flying along with Kaguya & the clarity of the images is outstanding!

Delores Moyer: Such photos would not convince the willful disbelievers, alas. They would just claim that the photos were (still more) fakes. (Or, if they somehow believed the new photos, they would claim that the flag and other equipment had been emplaced by robot landers instead of live crewmen.)