A Different Angle on Mars

The Mars Global Surveyor mission was always a special one for me. This trailblazing orbiter was one of the first that I followed on an almost daily basis during its nine years in orbit. As new images appeared with regularity on the mission's web site, I relished the Martian vistas they revealed--alien, exotic, yet also familiar. Among this expedition's many discoveries were the first closeups of active crater gullies that suggested the possibility of modern water flows underground.

A little rummaging through the online attic of raw and processed data from the mission uncovered some intriguing images. I picked a few of my favorites and cleaned them up just a bit. Like all Mars Global Surveyor shots, these are views of the Red Planet from orbit. What's different here is the highly oblique angle of these images. In each, the powerful Mars Observer Camera is not oriented straight down for maximum resolution, but off toward the horizon.

The result is a set of views that make me think of what it might be like to be at Mars, flying over the planet in person, looking out the window. Be sure to enlarge them, and see if you enjoy them as much as I did.

A cratered landscape and the thin wisp of Martian air as seen by the Mars Global Surveyor. I've removed some of the horizontal image artifacts from the raw image. 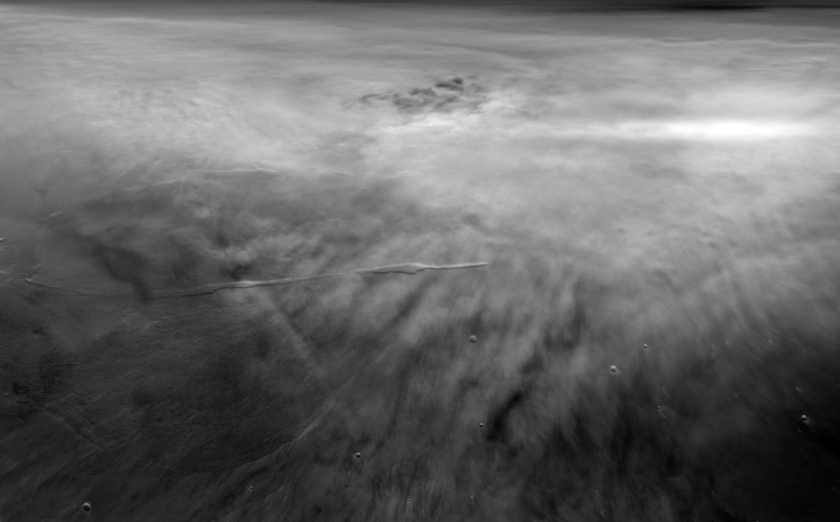 A view of the Martian horizon at dawn, as seen from space by the Mars Global Surveyor.