The Antarctic search for meteorites: who's going, and where we are going 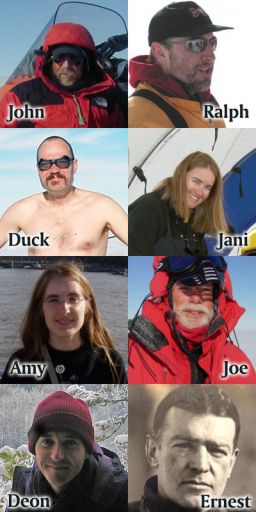 Top row: On the left, John Schutt, aka “Johnny Alpine”, the mountaineer and field safety officer for ANSMET since 1980. John has perhaps recovered more meteorites than anyone at any time. Recently John was presented with the Meteoritical Society’s Service Award, recognizing his amazing record of meteorite recoveries.

On the right, Ralph Harvey, associate professor in the Dept. of Geologial Sciences at Case Western Reserve University and PI of the ANSMET program. This will be his 19th season in Antarctica (the 17th as PI). For more, visit his website.

2nd row: On the left, Dave Mittlefehldt - aka “Duck”, a planetary scientist at NASA/Johnson Space Center in Houston, TX embarking on his fourth ANSMET expedition. A government-approved (totally boring and out-of-date) bio can be found here.

On the right, Jani Radebaugh is an assistant professor in the Department of Geological Sciences at Brigham Young University, doing research on icy outer planets and satellites. This will be her 2nd trip to Antarctica with ANSMET. For more, see her website.

3rd row: On the left, Amy McAdam, a NASA Postdoctoral Fellow in the Atmospheric Experiments Laboratory at NASA's Goddard Space Flight Center. Amy's research involves studies of the mineralogy and chemistry of martian materials and their analogs, including the Antarctic Ferrar Dolerite; finally she’ll get to see it in situ! See her website.

On the right, Joe Boyce is on the research faculty at the University of Hawaii, Hawaii Institute for Geophysics and Planetology. This is his 2nd trip to Antarctica with ANSMET. For more about him, visit his website.

4th row: On the left, Deon is a former exploration geologist from South Africa who got hooked on rocks from space. He holds a Master of Science in meteoritics from the University of Hawaii and is working towards a PhD. He prepared for this expedition by eating lots of chocolate and ice cream.

On the right, Sir Ernest Shackleton, an honorary member of the team. On Boxing Day, 1908, he and his colleagues became the first humans to set foot on the East Antarctic Polar Plateau, not far from where we’ll be the Dominion Range exactly 100 years later.

Where are we going?

ANSMET's targets for the 2008-2009 field season are icefields near the Davis Nunataks and Mt. Ward, and icefields adjacent to the Dominion Range, a triangular body of rock sticking up between the headwaters of the Beardmore and Mill glaciers. Reconnaissance visits in 1985 and 2003 recovered 152 meteorites from these icefields; during the coming season we will conduct more rigorous systematic searching, crossing the ice in overlapping transects designed to locate and recover as many meteorites as possible.

The team will begin the season near the Davis/Ward icefields, and if work there is completed in a timely fashion, we'll conduct a 30 km (20 mile) "flying traverse" (an overland snowmobile traverse with help from an airplane) to the icefields immediately adjacent to the Dominion Range. We will be roughing it, 21st century style -- living in Scott tents like the good old days, but with propane to run our stoves, solar panels to run our electronics, and snowmobiles to chase down those meteorites. 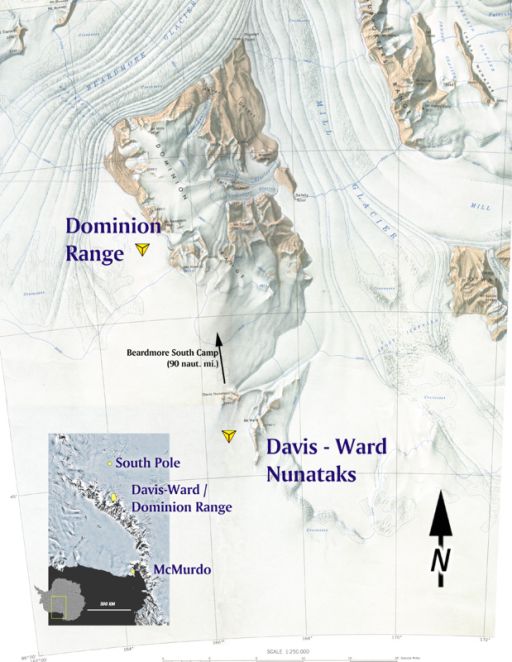