The Antarctic search for meteorites: return to civilization 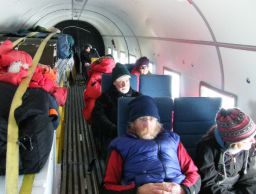 The ANSMET team on its way back to McMurdo 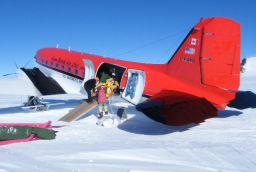 The ANSMET team on its way back to McMurdo

Oh the joys of civilization

Here I am, sitting in the galley in McMurdo. As I start writing this, it is 21:00 and I'm pounding down coffee that did not require me to melt ice to make it. I've had a hot shower. Oh how good was that after 47 days in the field! I ate supper sitting at a table. How novel! And there was no need to visit a poo tent - our dorm has a porcelain throne in its own room! A soft bed in a warm room awaits me. Life is good. No, life is GREAT!

The only downside is that John is my roommate. After 47 days in a tent with him, haven't I suffered enough?

Based on an estimated off-deck for the Basler, John decided we should start tearing down the camp a bit after 10:00. The Basler flight is just over two hours from McMurdo to Davis-Ward camp, but the plane was going to touch down at the fuel cache at Moody Glacier to top off their tanks before getting us. So, we would start hauling gear out to the skiway first, and only when John got confirmation that the Basler had left Moody Glacier would we take down the tents.

Everything worked flawlessly, an unusual occurrence for Antarctic deep field work. Most the gear was out at the skiway when the plane arrived, and the tents were down but not yet bundled. While Deon ferried equipment over to the skiway, Jani and John helped the Basler crew load the plane, and Amy, Joe and I finished bundling up the tents. We got all the gear to the skiway before it was needed for loading, so at no time was anyone idle. What an operation! It was almost as if we had practiced this hundreds of times. The flight back to McMurdo was uneventful. I like my flights to be that way.

We arrived a little before 16:00, and helped off-load all the gear. Then, it was in to McMurdo to get settled for the night.

Tomorrow we will start cleaning and sorting the gear. By tomorrow night, we should be mostly done, and ready for our northbound flight on the 28th.

But first, I've got a HUGE pile of laundry to do. And it stinks!

By the way, I take back all those evil thoughts I had for the Long Duration Balloon experiment folks. 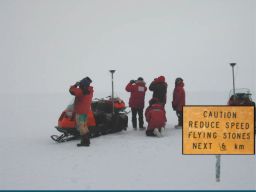 Ralph here, with a quick note to all our loyal followers. Duck, Jani, Deon, Joe and Amy are scheduled to fly north today sometime (I'm not sure when) so for obvious reasons updates from Antarctica will be slowing down now. In a few days I'll post a season's-end review of our progress, and don't be surprised if we hear a bit more from the others while travelling homeward.

John remains behind in McMurdo, to put all our gear to bed and set things up for next year. He'll head home once that's all taken care of.

And since every post deserves a picture, here's John's version of the truth about how meteorites are found..... 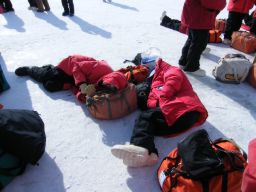 Waiting for the plane

Deon (left) and Jani can hardly contain their excitement at waiting for the plane that will take them northbound.
ANSMET 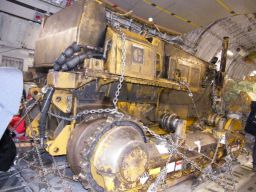 You see the strangest things on a C-17: A tractor from South Pole Station being shipped to New Zealand for a rebuild.
ANSMET 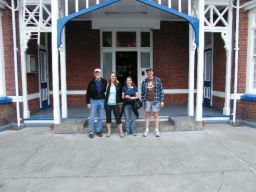 Hi folks. Sorry for not having posted anything for the last few days. We were kind of busy, and I, at least, was operating on too little sleep.

On the 27th, we hustled our butts to get all the camp gear cleaned up and turned in, and our recyclables cleaned, sorted and properly recycled. After that was done, we started cleaning out the ANSMET "cage" in the Berg Field Center (BFC). Since the early days of ANSMET, we have had a permanent storage room in the BFC where Ralph and John stored ANSMET gear over the winter for use in the next season. Well, the cage was taken away this year. Instead, Ralph has a cargo container that will be sealed, but outside in the weather all winter. We helped transfer gear over there so Johnny would not have to do it all by his lonesome self.

On the 28th we finished up a few odds and ends, and then made our way to transport for the long process of getting out of Antarctica - waiting for the shuttle to the airfield, going to the air field, waiting for the plane...You get the picture.

But we did indeed finally head northbound yesterday (28 Jan.) as Ralph posted for us. The flight (US Air Force C-17) was pretty much uneventful. The only odd thing about it was the amount of Air Force brass on board. We had two four star generals and one three star general on the flight. There must be some kind of VIP area behind the cockpit where the four-stars rode, but the poor lowly three-star had to ride with us peons.

Amy, Deon, Jani, Joe and I currently reside in the Windsor Hotel in Christchurch. We have seen green plants, dark skies and stars for the first time in almost two months. We have had beer and pizza. Joe and I visited Mister Snips and got hair cuts. Life is getting back to normal.

John remains in Antarctica to finish out logistic tasks to end this season and prepare for the next.

Soon, we will be splitting up and going our own ways. Joe heads back to Hawaii in two days. Deon is going to meet up with some of his South African buds in a couple of days. I think Amy and Jani will spend another day or two here before going back to the US. I'm going to the Christchurch airport in about two hours to meet my wife for a short vacation in New Zealand.

Weblogs will probably be few and far between for the future, but I'll try to convince everyone (including me) to post a "final" message on their thoughts on life in Antarctica when they get back home. We'll see if it works.

Regardless, I'm sure I keyboard for everyone on the team when I say that we want to thank all of our dedicated readers for the interest they have shown in our work, trials and tribulations over the last two months. We hope you have enjoyed reading about our exploits as much as we have enjoyed bringing them to you.