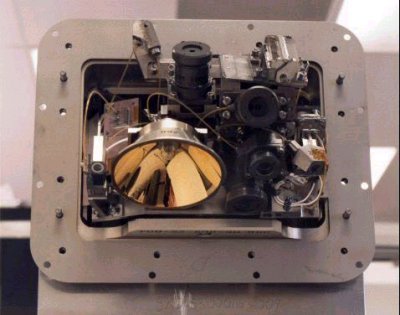 The Descent Imager Spectral Radiometer's lamp (gold) and three cameras (to the right of the lamp) peek out the side of the Huygens probe.

The Descent Imager Spectral Radiometer crams six sub-instruments into a tiny footprint within the Huygens probe. The component instruments on DISR share space on one Charged Coupled Device (CCD, the most common kind of detector in digital cameras) and two linear indium-gallium-arsenic arrays (commonly used for spectrometry). The light that is gathered by DISR's optics is shared among all the instruments and the detectors through an ingenious system of bundled fiber optic ribbons, so DISR has almost no moving parts.

• Imagers: In order to take maximum advantage of the limited data rate available to DISR, the imaging system is split into three cameras: a low-resolution, Side-Looking imager (SLI); a Medium-Resolution imager (MRI) pointed at an angle, and a High-Resolution Imager (HRI) pointed downward. There is no color information in the camera images.
• Visible Spectrometer: There are two, an Upward-Looking Visible Spectrometer (ULVS) and a Downward-Looking Visible Spectrometer (DLVS), which allow DISR to measure the spectral properties of the sunlight that streams downward from the Sun (using ULVS) and the reflected light streaming upward from Titan (using DLVS). The DLVS can resolve 4 by 4-degree pixels on the ground. The DISR team will use data from the Visible Spectrometers to apply color to the camera images.
• Infrared Spectrometer: Also split into an upward-looking and a downward-looking instrument, the Infrared Spectrometer extends the color information gathered by DISR into near-infrared wavelengths (870 to 1700 nm).
• Solar Aureole Camera: Measures the intensity of scattered sunlight in the atmosphere in order to determine the size and shape of particles in the atmosphere.
• Violet Photometer: There are two, one upward- and one downward-looking violet photometer. They measures the intensity of light in an area of the spectrum (violet light at 350 nm wavelength) that is sensitive to the presence of photochemical hazes.
• Sun Sensor: As Huygens rotates, this instrument tracks the direction toward the Sun, in order to trigger the upward-looking instruments to capture data at known orientations relative to the position of the Sun.

In addition to the six sub-instruments, DISR also sports a "Surface Science Lamp," which is activated when Huygens is at an elevation of 700 meters above the ground to provide a light source for the downward-looking instruments.

Each of the three imagers is alotted an individual chunk of the space on the DISR CCD:

DISR's Charged Coupled Device, or CCD detector, is 512 x 520 pixels in size, about one quarter of a Megapixel. Of that, half is reserved as a memory or storage section. The remaining 256x520-pixel area is partitioned among the three cameras (HRI, SLI, and MRI), the Solar Aureole, ULVS, and DLVS sub-instruments.

The resolutions and areal coverages of the three cameras were chosen to maximize the area of Titan's surface that could be observed in one "look," while also maximizing the resolution of the downward-pointing view. The three cameras have slightly overlapping footprints on the ground:

Side-by-side comparison of the footprints of each DISR imager

At any one azimuth, Huygens captures a "triplet" of images, one from each camera:

This is one DISR "triplet," which consists of one SLI frame (left), one MRI frame (center), and one HRI frame (right), displayed here at half the full resolution of the instrument.

How Does the Descent Imager Spectral Radiometer Fit in the Context of Planetary Exploration?

Since there has never been a mission like Huygens, there has never been a camera system like DISR. No spacecraft has ever had to capture and return all of its images within 2.5 hours while descending toward a surface on a spinning, swaying platform. On top of these geometric challenges, DISR was limited to a data rate of 4800 bits per second. Surface missions to Mars had the luxury of months to years to return images. The only other missions that faced anything near the engineering challenges that Huygens faced were the Venera landers, the Soviet missions to the surface of Venus. Those landers returned only one to four images apiece; Huygens returned more than 350.

These facts focus on the imaging sub-instrument of DISR. For further information on the DISR system, check out M. G. Tomasko et al., "The Descent Imager/Spectral Radiometer (DISR) Experiment on the Huygens Entry Probe of Titan," Space Science Reviews 104: 469-551, 2002.

In order to make the most of the 2.5-hour descent and 4800 bits/second bandwidth available to the DISR system, different kinds of observations were employed at different elevations above Titan's surface.

Here are just a few raw, unprocessed, uncalibrated DISR images fresh from Huygens' descent to Titan. What these images mean will have to wait for further commentary from the science team. 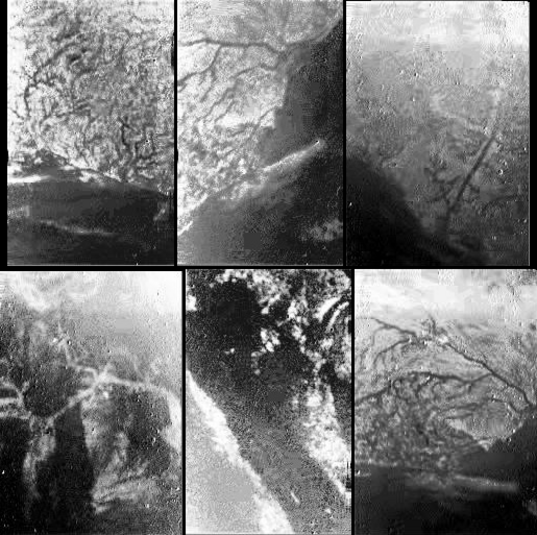 The DISR science team consists of the Principal Investigator and nine Co-Investigators spread across the United States and Europe, plus many other staff engineers and scientists not listed here.

The technical information on this page comes mostly from "The Descent Imager/Spectral Radiometer (DISR) Experiment on the Huygens Entry Probe of Titan," Space Science Reviews 104: 469-551, 2002. Additional information came from the DISR team website at: http://www.lpl.arizona.edu/~kholso