This article originally appeared on the PlanetPlanet blog and is reposted here with permission.

Mars is a weirdo. (Well, as far as planets go).

We’ve got four rocky planets in the Solar System. Earth and Venus are about the same size. But Mars and Mercury are puny. Mercury’s got an excuse — it’s closer to the Sun, has lots of iron and all that. But what’s up with Mars? Why is it so small (just 11% as massive as Earth)?

This “small Mars” issue comes up when trying to understand how our Solar System formed. If we simulate the planets forming from a smooth disk of rocky stuff (animation here), the Solar System doesn’t look right: 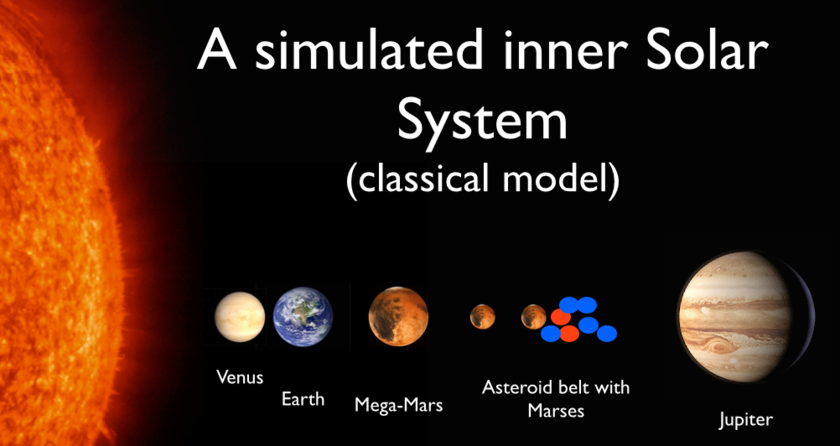 Our simulated Marses grow way too big. They’re typically about the mass of Earth, about nine times more massive than the real Mars.

To date there are two viable solutions to the small Mars problem. I’ve written about both before (because I’ve worked on both). The first is the Grand Tack model, which proposes that the inner Solar System was sculpted by Jupiter’s migration. The second is the Low-mass Asteroid belt model, which instead proposes that there was never much rocky stuff between Earth and Jupiter’s orbits in the first place.

Today I’ll present a new (in some ways simpler) solution: the Early Instability model. The scientific paper on the model was led by Matt Clement at the University of Oklahoma and it was just published in Icarus (download it here).

This new solution piggybacks on a different Solar System story. It started in 2005 when a new idea came out, called the Nice model (you can tell it’s a big deal because it has its own Wikipedia page). The key new idea was that the Solar System’s giant planets underwent an instability. Not a super-strong instability as is characteristic of exoplanet systems, but an instability nonetheless.

This animation shows the idea. The giant planets probably formed on a more compact orbital configuration with an outer disk of planetary leftovers called planetesimals. After some time, an instability in the giant planets’ orbits was triggered, causing their orbits to rapidly spread out and change shape. The outer disk of planetesimals was completely cleared out, and one extra ice giant may even have been kicked out of the Solar System (Planet Nine anyone?).

Animation of the “Nice model” giant planet instability. Time zero is the moment of instability. The green dots represent rocky/icy leftovers of planet formation.The circles are the orbits of the giant planets (including one extra ice giant that is ejected).

It was first thought that this instability happened late, maybe 500 million years after the Solar System started forming. The idea was to explain the Late Heavy Bombardment, an apparent spike in the bombardment rate on the Moon.

However, our thinking related to the timing of the instability has changed. This has included a re-analysis of different cosmochemical constraints (e.g., from meteorites and Moon rocks). New studies suggest that the Moon’s Late Heavy Bombardment may be an illusion, the tail the bombardment related to clearing out the leftovers of planet formation (see here or here for details).

I’m glad you asked! Here is an animation that Matt made of this process. The simulation starts with the building blocks of the rocky planets close to the young Sun, the giant planets (in black), an outer disk of planetesimals (the green dots in the previous animation). There is an extra ice giant in there that is kicked out during the instability.

When the instability is triggered after 10 million years (Myr), the asteroid belt gets really excited and so does Mars’ feeding zone. This has the effect of stunting Mars’ growth and simultaneously depleting the asteroid belt. The instability has little effect on the growth of Earth and Venus, so those planets end up much more massive than Mars, as in our actual Solar System. A nice solution to the small Mars problem.

Matt ran several hundred of these simulations. He found that simulations that match the rocky planets best are those that also match the giant planets best. That is really nice because it’s simple: one event can explain the inner and outer Solar System in one fell swoop.

So now there are three competing models to explain the Solar System: the Grand Tack, Low-mass asteroid belt and Early Instability models. Here is a cartoon comparison: 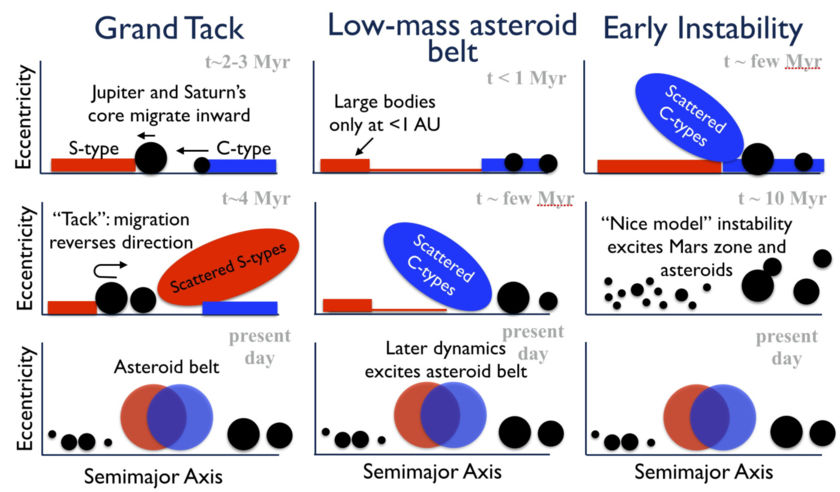 From a review chapter I wrote for an upcoming book.

You can never prove that a model is right, only show that it is wrong. Each of these three models has a potential Achilles heel. For the Grand Tack model it’s the outward migration mechanism. For Jupiter and Saturn to migrate outward they need to maintain a specific mass ratio (Saturn must be between 2-4 times less massive). But the planets are growing as they migrate. Can they maintain the right mass ratio for long enough? For the Low-mass asteroid belt, the issue is simply whether it is plausible for a lot of rocky material to have formed in a ring centered between Venus’ and Earth’s orbits, with almost no big bodies in the asteroid belt. For the Early Instability model the issue is simply the timing of the instability. The model works great if the instability was very early but if it happened after the terrestrial planets were done forming then it could not have shaped them.

In the coming years, we should be able to poke at these issues and figure out if they are true Achilles heels that might kill off some of these models. But then again, maybe we’ll come up with some new ones to replace them!

A final philosophical note: You might ask yourself: if there were already two good solutions to the small Mars problem, what was the point of making another model? Well, remember that we are trying to figure out what happened almost 5 billion years ago. It’s like trying to solve a crime that happened in the 1300s using as evidence just a couple of used tissues from that period and some faded paintings of the crime scene (that may themselves have been tampered with). No easy task. So it’s worth considering every plausible explanation. In fact, two of these models (and, quite possibly, all three) must be wrong. 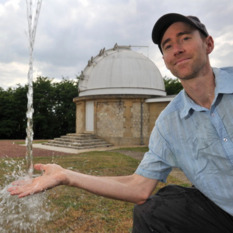 Hi Shawn. This is an interesting article. It jogged a memory for me of a theory that I read back (I think) in the mid 90's) that thinks Luna was formed by a mars sized body hitting our planet in the area now known as the Marianas Trench in the initial formation stages. The result was Lunas creation. Taking those data points one must wonder what this does to the 'Nice Model' theory. Does it create a new theory for you to work on? Hmm ... Thanks for the interesting article!