The first operational launch of the Geostationary Satellite Launch Vehicle Mark 3 rocket (GSLV-MK3), developed by the Indian Space Research Organization (ISRO), was successfully conducted on June 5, 2017 from the Satish Dhawan Space Center at Sriharikota on the east coast of India.

The launch vehicle, designated the GSLV-MK3-D1, placed the 3136-kg GSAT-19 experimental communications satellite into a geostationary transfer orbit with a perigee of about 170 kilometers and an apogee of about 36,000 kilometers. This maiden orbital launch comes two-and-a-half years after an experimental suborbital test in December 2014, when the booster and core stages of the vehicle were flight tested with a dummy upper stage. 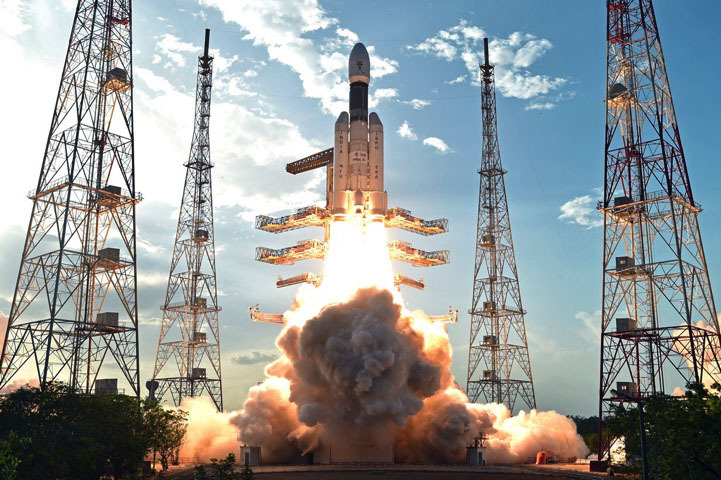 GSLV-MK3-D1 lifting off from its launch pad at the Satish Dhawan Space Center.

About the GSLV-MK3 launch vehicle

The GSLV-MK3 is a 3-stage rocket designed to place 4 metric tons into geostationary transfer orbit. It consists of two solid boosters, a hypergolic liquid core stage, and a cryogenic upper stage. 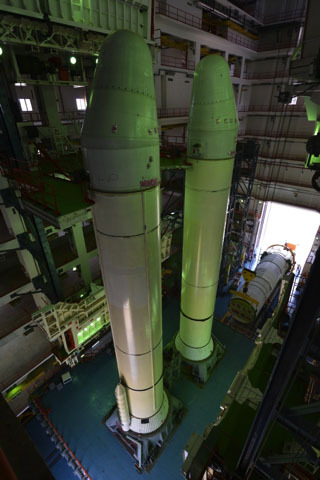 The two S-200 strap-on boosters of the GSLV-MK3 in the Solid Stage Assembly Building at the Satish Dhawan Space Center.

The core stage of the rocket, designated the L-110, consists of two clustered Vikas liquid engines burning about 116 metric tons of hypergolic liquid propellant, with unsymmetrical dimethylhydrazine (UDMH) as fuel and dinitrogen tetroxide as oxidizer. This stage generates about 1.6 meganewtons of thrust. 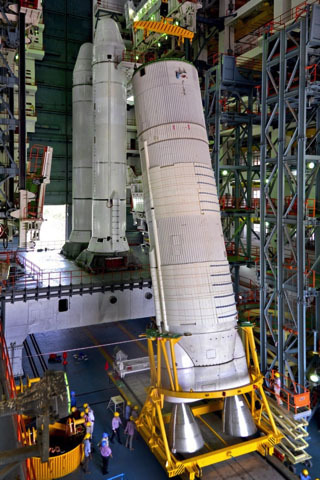 L-110 core stage being hoisted up to the launch pedestal in the Solid Stage Assembly Building at Satish Dhawan Space Center.

The "C-25" upper cryogenic stage has a CE-20 cryogenic engine with 28 metric tons of propellant, consisting of liquid-hydrogen as fuel and liquid-oxygen as oxidizer capable of producing about 200 kilonewtons of thrust. 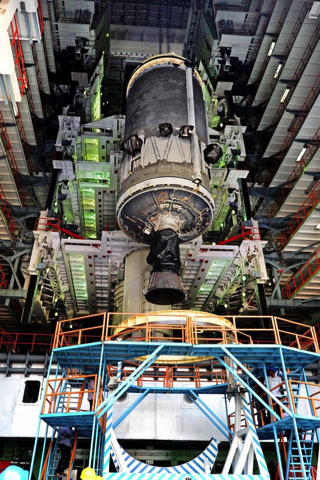 The fully assembled vehicle stands over 43 meters tall and weighs 640 metric tons at liftoff, with propellants constituting about 554 metric tons of this weight. The solid boosters and core stage are vertically assembled in the Solid Stage Assembly Building at the Satish Dhawan Space Center on the vehicle’s mobile launch pedestal before being wheeled out to the Vehicle Assembly Building.

There, the cryogenic upper stage and the satellite payload, along with its protective payload fairing, are integrated with the rest of the vehicle. The fully assembled rocket is then wheeled out to the launch pad, designated the Second Launch Pad, with an umbilical tower that provides access to the rocket through moveable platforms, has equipment for loading the propellant tanks of the liquid and cryogenic stages, and provides accessory power to the rocket prior to launch. 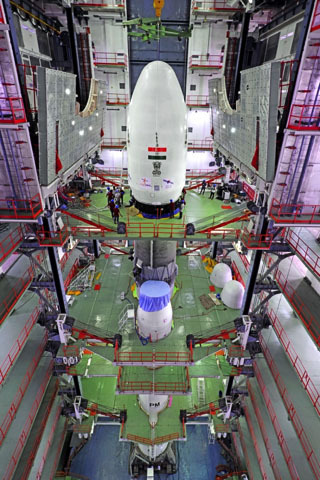 Payload fairing containing the GSAT-19 satellite being integrated into the launch vehicle.

The core stage uses ISRO’s proven Vikas engine—derived from the Viking engine developed for Arianespace’s initial set of launchers—in a two-engine cluster. The Vikas engine has powered all versions of the PSLV and GSLV-MK1 and GSLV-MK2, and in various stages. However, this is the first clustered engine configuration in any launch vehicle developed by ISRO, and has a much higher amount of propellant than in earlier vehicles (110 metric tons vs. the 42 metric tons of propellant in the L-40 booster stages of the GSLV-MK2 that employ the same Vikas engine).

While not the first cryogenic engine developed by ISRO, the upper stage CE-20 engine of the GSLV-MK3 is a more powerful engine than the previous CE-7.5 engine developed for the GSLV-MK2 (generating 200 kilonewtons of thrust vs. 75 kilonewtons for the latter), with greater propellant loading (28 metric tons vs. 12.8 metric tons) and with a different combustion cycle (gas generator cycle vs. the staged combustion cycle). 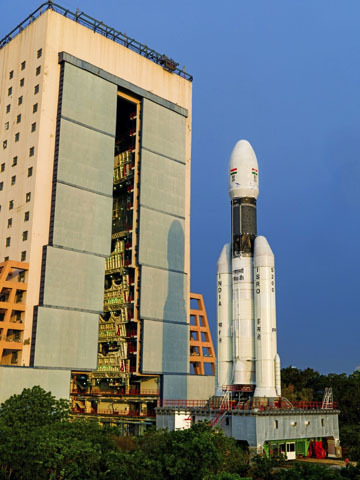 Fully assembled GSLV-MK3-D1 being transported from the Vehicle Assembly Building to the Second Launch Pad at the Satish Dhawan Space Center. 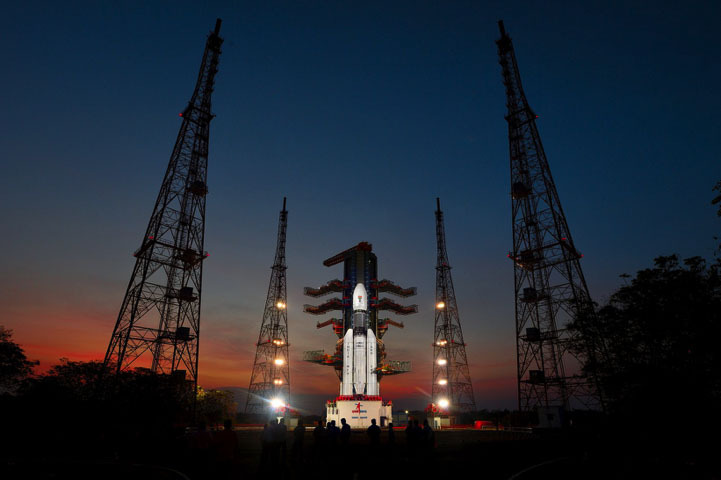 After a countdown that lasted over 25 hours—involving extensive pre-launch tests and propellant loading of the core liquid stage and the cryogenic upper stage—the rocket’s two S-200 booster engines ignited at the designated launch time of 7:58 EST (11:58 UTC/17:28 local time) on June 5, 2017. Liftoff proceeded normally, with the vehicle clearing its umbilical tower and soaring into the skies against the backdrop of the late-afternoon sun. 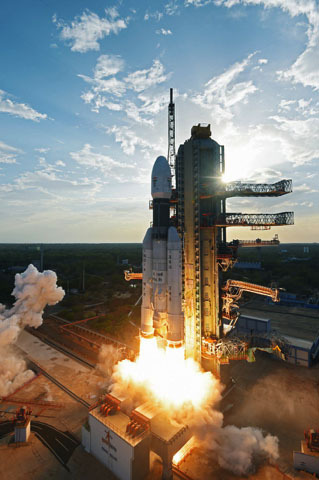 GSLV-MK3-D1 lifting off from its mobile launch pedestal, and clearing the umbilical tower, at the Satish Dhawan Space Center.

At about 1 minute 55 seconds after launch, the L-110 liquid core stage ignited. This was done while the two solid boosters were still powering the engine. At this point, the vehicle had attained an altitude of about 51 kilometers and a velocity of about 1.6 kilometers per second.

The two S-200 solid boosters burned out and separated from the vehicle at about 2 minutes and 21 seconds after launch. The vehicle was now at an altitude of almost 62 kilometers and had a velocity of over 1.9 kilometers per second.

At about 3 minutes 46 seconds after launch, the payload fairing (also referred to as the heat shield) separated. The vehicle attained an altitude of almost 115 kilometers and the satellite payload did not require the protection of the payload fairing due to the rarity of the atmosphere at this altitude.

After powering the rocket for 3 minutes 23 seconds, the L-110 core stage shut off at about 5 minutes and 18 seconds after launch. At this point, the vehicle reached an altitude of about 166 kilometers and a velocity of about 4.4 kilometers per second. Two seconds later, the core stage separated from the vehicle. 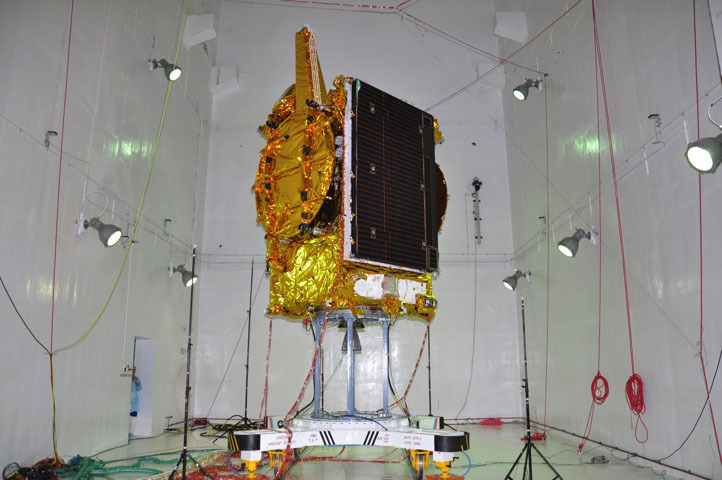 A series of orbit-raising maneuvers using the satellite’s own liquid apogee motor and onboard propellant will raise the satellite over the course of the next few weeks to its designated nearly circular geostationary orbit, with a path directly above Earth’s equator. In this orbit, the satellite has an orbital period equal to Earth’s rotational period, and hence appears stationary to an observer on the ground. This is the preferred orbit for communications satellites, which are used for television, telephone, radio, internet and military communications, among other applications.

After this successful test launch, ISRO has planned a series of two additional test launches over the coming years, after which the launch vehicle will be declared operational. During these tests, the launch capabilities of the vehicle will be tested and expanded, with changes to the stages and their propellant loadings, and optimization of the launch sequence to enlarge the payload capacity to the planned 4 metric tons. The next test of the vehicle, designated GSLV-MK3-D2, is scheduled for the first half of 2018.

With this successful test launch, ISRO has embarked on the third phase of its orbital launch vehicle program. The experimental first phase consisted of the solid-fueled SLV-3 and ASLV launchers developed in the late 1970s and 1980s, which launched small experimental satellites to low Earth orbit. The operational phase, in the 1990s and 2000s, developed the workhorse Polar Satellite Launch Vehicle and the Geostationary Satellite Launch Vehicle in its Mark 1 and Mark 2 configurations, launching 2 metric ton class payloads to polar, sun-synchronous and geostationary transfer orbits, respectively. In this phase, capabilities were expanded to include hypergolic liquid engines and cryogenic engines, and ISRO launched its own fleet of operational satellites as well as space science missions and offered its launch services to clients from various countries. In the launch independence phase, starting with today’s launch of the GSLV-MK3, the launch capability is being expanded to place 4 metric ton class payloads in geostationary transfer orbit. This allows ISRO to launch its current class of operational communications satellites on its own launchers. The future plan for this vehicle is to enhance its launch capacity to geostationary transfer orbit to 6 metric tons and beyond. This will be achieved through improvements to the existing launcher, as well as through its evolution into the Unified Modular Launch Vehicle family of rockets.

With the new capabilities that it provides, its significant growth potential in terms of payload capacity, and its potential for use in a future human spaceflight program, the GSLV-MK3 rocket heralds an exciting future for India and the Indian Space Research Organization in the exploration and commercial exploitation of space. 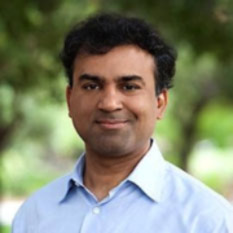