This article originally appeared on Cassie's blog and is reposted here with permission.

My paper on the discovery of a widespread (~375 000 sq km) subsurface water ice deposit in southwestern Utopia Planitia, Mars, was published in Geophysical Research Letters (GRL) a few weeks back, along with a NASA press release today. The detailed version is offered in the journal article, but I thought I’d include a higher-level description of what’s up in here.

When you look at Utopia Planitia, there’s a lot of weird stuff going on. For those that aren’t intimately familiar with martian geography, Utopia Planitia is a huge, ~3300 km diameter basin that formed by impact early in Mars' history. It makes up part of what’s known as the northern plains, the more-or-less flat terrain north of the martian dichotomy boundary. For as long as we’ve had good imagery from the region, we’ve noticed interesting features on the surface—features like polygonal cracked terrain and oddly-shaped, rimless pits called “scalloped depressions”. When we see features like this on Earth, they’re associated with subsurface ice or permafrost. These features led scientists to believe that this is an ice-rich region of Mars, and inspired my team to examine radar sounding data from the area. 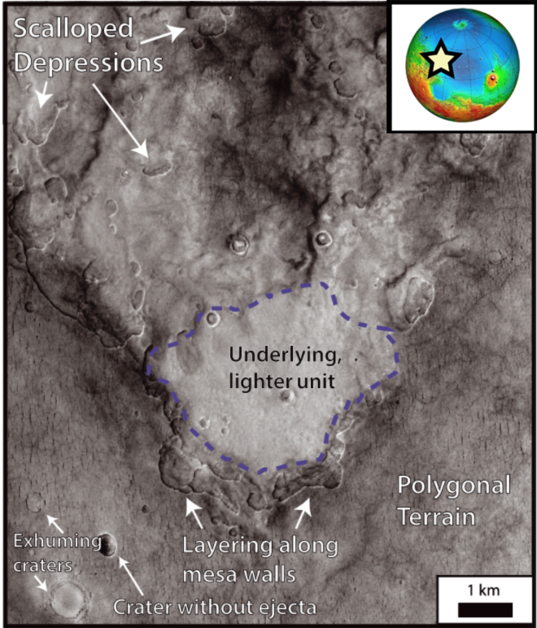 Some examples of “weird” morphologies in western Utopia Planitia. A few of these are highlighted to show the unit is eroding away—the exhuming craters, the peek-a-boo to the underlying unit, and the scalloped depressions are all signs that this material is deflating. The scalloped depressions and the polygonal terrain are specifically what led scientists to believe there’s subsurface ice here.

Our work went in and tested the water ice hypothesis using the ground-penetrating radar instrument on Mars Reconnaissance Orbiter, called SHARAD. “SHARAD” stands for SHAllow RADar, and it can theoretically sound up to 1 km into the martian subsurface…so the “shallow” is a bit relative. SHARAD operates in the 15–25 MHz range, which determines its vertical resolution through different materials (15 m in free space, ~8 m in water ice). There are a few different things SHARAD can tell us. One is the geometry of subsurface layering, such as what’s used for stratigraphic analyses at the polar caps. It’s also been used to produce global surface roughness maps. Most relevant for Utopia Planitia, it can be used to find what’s called the “dielectric permittivity”, or the dielectric constant, of the subsurface. That’s what we did in our work.

The SHARAD instrument in orbit sends radar waves toward Mars. Some of that radar wave bounces off the surface, but the rest can penetrate into the ground and occasionally bounces back to the satellite from a subsurface source. These returns can be used to calculate the dielectric constant of the subsurface, which sheds light on the geology of an area. For example, a radar wave travelling through basalt would result in a dielectric constant of 8. Water ice is in the 3.0–3.2 range. 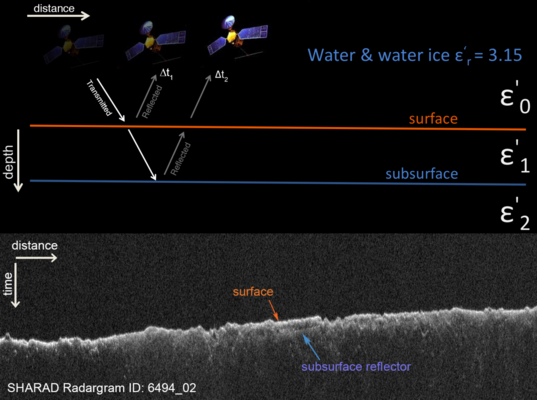 Quick diagram of how SHARAD works (top), and what its output radargram looks like (bottom). As SHARAD travels in orbit, it sends radar pulses towards Mars. Some of the wave bounces back from the surface, and some penetrates into the ground. If it hits a boundary in the “dielectric” properties (ε1, ε2) in the subsurface, that wave bounces back. Based on these returns, we can measure some material properties of the subsurface. A characteristic dielectric constant for water ice is 3.15.

To figure out if the dielectric constant of the Utopia Planitia subsurface is consistent with water ice, two main steps were involved. The first involves simply looking at the data. I examined over 600 radargrams over Utopia Planitia, and found subsurface reflectors in about 80 of them. The next was a bit trickier, and that was to estimate how deep the reflectors lie. In order to calculate the dielectric constant, the distance to the subsurface reflector must be known. Fortunately, the reflections spatially correlate with a geologic unit that blankets all surrounding terrain. In Mars Global Surveyor Mars Orbiter Laser Altimeter (MOLA) topographic maps below you can see that the reflectors are all sitting on top of the high-elevation parts in red/orange. When you look at those areas in imagery (like the one with all the weird morphologies above), you can see a striking geologic contact there. The upper stuff is full of polygons, scalloped depressions, exhuming craters, and generally looks really icy (at least to planetary geomorphologists). The material underneath is way more cratered (and thus much older), lighter in colour, and generally doesn’t have any morphologies suggestive of ground ice. It seemed logical to say that this geologic contact was the “dielectric contrast” we were looking for!

Next, we just had to estimate the thickness of that blanketing geologic unit. Fortunately there are a ton of gaps in the middle of it (like shown above), so we simply measured the top and bottom of each of those gaps for our depth-to-reflector values. When we plugged these values into the calculation for the dielectric constant and averaged over the entire area, we obtained a value of 2.8. 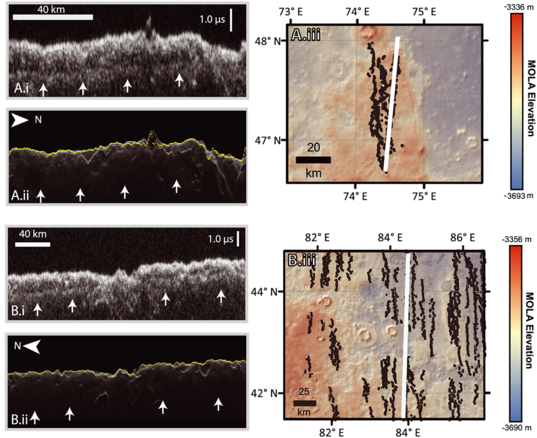 The images on the left are radargrams (upper of each set) and their respective noise simulations (lower of each set). The images on the right are the topographic context for the reflectors we see. There was a clear correlation between the high-elevation areas and the subsurface reflectors. This was crucial for finding the thickness of the geologic unit sounded by the radar instrument, which allowed us to measure its dielectric properties!

This value is lower than what is expected for pure water ice. Ideally, pure, solid water ice would have a dielectric of 3.0-3.2. In reality, we often have different materials in the mix. Rock, water ice, and porosity (i.e,. air) are in a three way tug-of-war over the dielectric constant result. Porosity pulls it down from 3, towards 1, and lithic (rock) content or dust brings it up towards 6–8. My work used a handy ternary diagram from Bramson et al. (2015), to come up with a possible combination of material that is consistent with our result. This amounted to a value of 50–80% water ice, 0–30% rocky content, and 15–50% porosity. So, think of a mostly icy but somewhat porous subsurface, with a bit of dust and lithic material mixed in.

This result implies a volume of water ice around 1.2 times the volume of Lake Superior. This is huge! And when you combine this result with work done by Bramson et al., 2015, which found a similar composition for the subsurface in Arcadia Planitia, it paints a picture of a northern plains rich in subsurface water ice, with widespread areas where these deposits are tens of metres thick.

Overall, it’s great to have geophysical support for what the geologists and geomorphologists have been saying for a while: that there are broad areas of subsurface ice throughout the northern plains thanks to deposition during high obliquity periods on Mars. What our evidence adds to that discussion are constraints on what kind of ice is there, in our case excess ice (i.e., more than 50% ice), and how thick it is throughout this area. The finding of excess ice contributes to the debate on how this water ice was emplaced, narrowing the range of plausible geologic histories for the area. And the constraints on thickness contribute to what we know about high-obliquity deposition of water ice in the mid-latitudes. We can see that the Utopia deposits are roughly twice the thickness of what’s measured in Arcadia Planitia, and much much thicker than what is expected for the latitude-dependent mantle generally (metres). This may speak to differential deposition of water ice during recent high-obliquity cycles, which could potentially act as a constraint for climate modellers down the road.

Finally, this is some of the lowest latitude water ice we’ve found on Mars, down to roughly 40°N (the lowest being Deuteronilus Mensae, where we see glacial features down to ~35°N). Considering that it’s no longer wacky to suggest that people are going to be visiting Mars someday, I don’t think it’s too radical to suggest that it’s important to characterize our low-latitude water ice deposits as potential resources. If our future missions are going to have astronauts, those astronauts are going to need something to drink. With these results, we see that Utopia Planitia is a great place for that…provided you find a way to deal with all the radiation and dust storms. 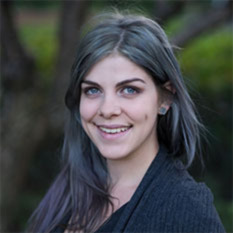 Any indication of how much it actually is "ice", vs. permafrost? Also how much you'd actually be looking at "water" vs., say, concentrated brine saturated with potentially hazardous compounds such as perchlorates?

I would have expected a region like Utopia to be rich in ice, although this discovery could be of tremendous value to choosing a base site, so long as high latitude isn't an issue. The lower values if about 1 meter of thickness of regolith to dig through would especially be useful to seek out.