This article is cross-posted on Astronomy.com with permission.

Martian gullies were in the spotlight last week thanks to a NASA press release stating they were "likely not formed by liquid water." The release concerns the publication of a new paper by Nuñez et al. in Geophysical Research Letters, which looked at spectral data of gullies from the Mars Reconnaissance Orbiter (MRO) Compact Reconnaissance Imaging Spectrometer for Mars (CRISM). In their study, Nuñez and his colleagues looked at over 100 gullied locations on Mars. They found no evidence of minerals that would be expected to form in the presence of water. Rather than water, they point to sublimation of seasonal carbon dioxide frost as the main culprit behind gully formation on Mars. Other people have proposed a similar model to explain present-day activity in gullies, which appears to happen during periods of active defrosting. But this process has been a topic of debate among the Mars gullies community, and was a big discussion point at the "Martian Gullies and Their Earth Analogues" workshop in London back in June. Can this dry process explain both the initial formation of gullies and gullies' modern-day activity?

First, a bit of background info. How gullies on Mars formed has been a big subject of debate ever since they were discovered in 1997 by Malin and Edgett with the Mars Orbiter Camera aboard Mars Global Surveyor. Gullies on Mars look like gullies carved by water on Earth. But Martian gullies are geologically young (tens to hundreds of thousands of years)—much younger than when liquid water was stable on Mars' surface. So, this became quite the conundrum: How did these form on Mars so recently? Three main ideas were initially proposed: water, carbon dioxide, or dry granular flows. 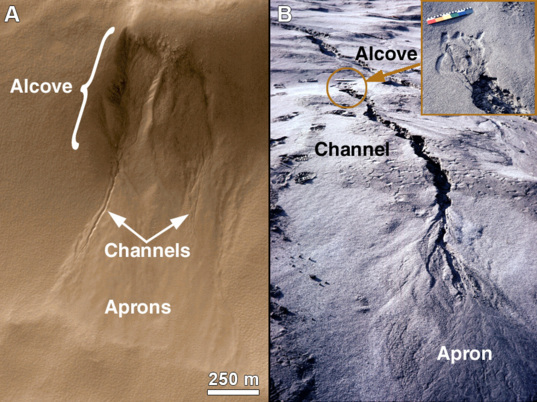 Gullies on Mars vs. Earth

(A) Gullies in the mid-latitudes of Mars with the three characteristics labelled: Alcove, channels, and apron. (B) A gully on Mount St. Helens, imaged by Michael C. Malin. Coloured bar is 30 cm long. Modified from MGS MOC Release No. MOC2-234.

Most of the Mars community has favored water in some form or another as an explanation for gully formation for a while, based upon gully morphology. Potential sources of this water include the melting of snow (preserved in dusty snowpacks) or near-surface ground ice. Groundwater aquifers were also proposed, but this hypothesis has fallen out of favor because ground-penetrating radar instruments on Mars Express and MRO have failed to detect any such aquifers, and geophysicists have had difficulty explaining how liquid water aquifers could be sustained under Mars' current conditions.

The second hypothesis for gully formation, dry granular flow, is exactly what it sounds like: Dry material moving down a slope. On its face, it seems pretty logical to assume that the present-day bone-dry Mars would experience these kinds of flows. Well, there are two problems here. First, the global distribution of gullies and the directions in which they point suggest there has to be some climate influence on their formation. Gullies on Mars are restricted to the middle and high latitudes. In the mid-latitudes, they are mostly found on pole-facing slopes. But, at higher latitudes, they mostly occur on equator-facing slopes. This relationship can't be explained by simple dry landslides. We'd expect to see those all over the planet—and we do see landslides all over Mars that are very clearly dry, but they look very different from gullies. The key feature they are missing is the channel. This is the second problem with the dry flow model: Dry flows don't produce features consistent with gullies. 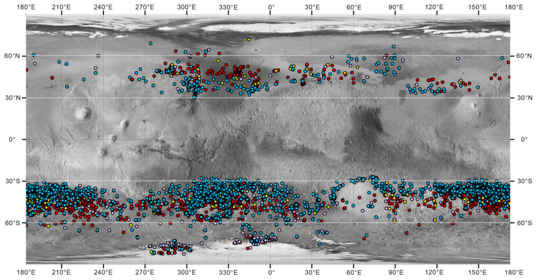 Map of gully distribution on Mars 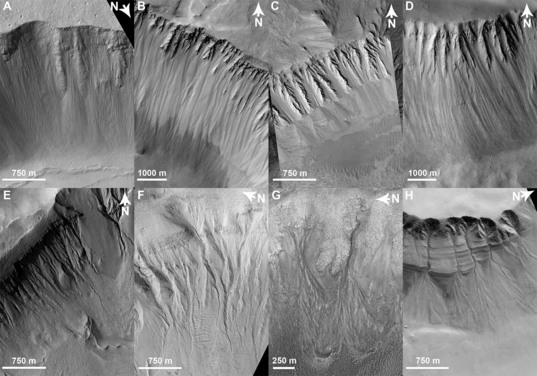 The top row shows landslides with morphologies consistent with dry mass wasting in the equatorial regions of Mars, while the bottom row shows examples of gullies from Mars' mid-latitudes.

So, gullies on Mars look like they were carved by a process involving water. Explaining the source of this water was tricky enough knowing gullies are geologically young. However, in the last few years, we've actually seen activity happening in gullies on Mars today. Another conundrum!

The Mars Orbiter Camera (MOC) aboard Mars Global Surveyor imaged Naruko Crater on December 22, 2001, and again on April 24, 2005. Sometime between then, a new light-toned flow formed in a pre-existing gully channel.

Thanks to continuing monitoring efforts by the MRO Context Camera (CTX) and High Resolution Imaging Science Experiment (HiRISE), we've seen enough active gullies on Mars to know that this activity is clustered around defrosting periods. On Mars, carbon dioxide (and a bit of water) frost is deposited on the surface when the temperature gets cold enough. The model that has been proposed for gully formation involving carbon dioxide frost came out of this observation. The carbon dioxide-frost-related model is, as coined by Nicholas Heavens at the Martian Gullies and Their Earth Analogues workshop, like an air hockey table. The idea is that during these defrosting periods, sunlight penetrates the semi-transparent carbon dioxide frost on a slope, heating the ground underneath. The carbon dioxide frost sublimates from the bottom up, turning into gas that then mobilizes the regolith (soil) on the slope, fluidizing it and transporting it downhill. 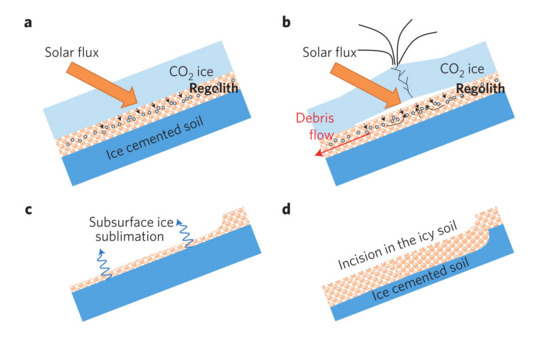 So, conundrum solved, right? Not quite. A big subject of debate at the Martian Gullies workshop was whether this process could actually carve channels into rock. Another issue was whether this process could transport large boulders, which we see in the aprons of many martian gullies. On Earth you need the "oomph" of a debris flow to do that, rather than an entirely dry flow or purely fluvial flow (think of a stream: it can transport pebbles, but doesn't have the power to carry giant boulders along). The morphology of many gullies on Mars suggests that they were formed by debris flows—a mix of a bit water with a lot of sediment—rather than flowing streams of water. Volcanic pyroclastic flows, which are gas-supported, can transport large boulders, but whether they can be invoked as an analogue for the carbon dioxide gas model of gully formation is unknown. The velocities and amounts of material involved in pyroclastic flows are huge, generated by column collapse during volcanic eruptions. On Earth however, pyroclastic flows are typically depositional events rather than erosional, and don't "carve" out channels like those observed in martian gullies. 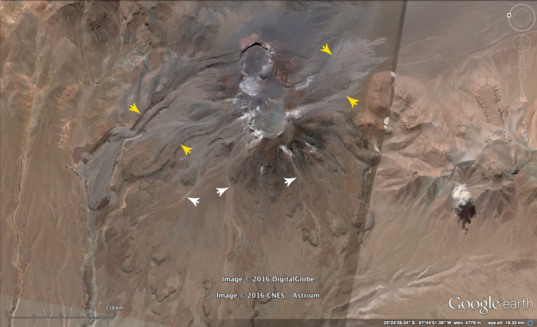 The general consensus from the Martian Gullies workshop was that carbon dioxide gas fluidization process could mobilize loose, small (sand-sized or smaller) grains in a pre-existing channel. But many conference attendees were not convinced that the process could generate the channel morphologies observed in gullies. We can see on Mars today that frost preferentially hangs out in gullies because of protective shadows. So, frost is probably playing a role in activity in gullies today, but it wasn't likely capable of forming them in the first place. The morphology of gullies almost certainly requires the flow of liquid, and on Mars that liquid is mostly likely water. What we're likely seeing is a symbiotic process: Debris flows (or some other type of water-abetted flow) carved the gullies, creating abodes in which frost could later collect and cause activity within gully systems. Thus far we've only seen activity occurring in existing gully systems, rather than the formation of new gullies (note that I'm not including dune gullies in this discussion as they are perhaps a different beast). 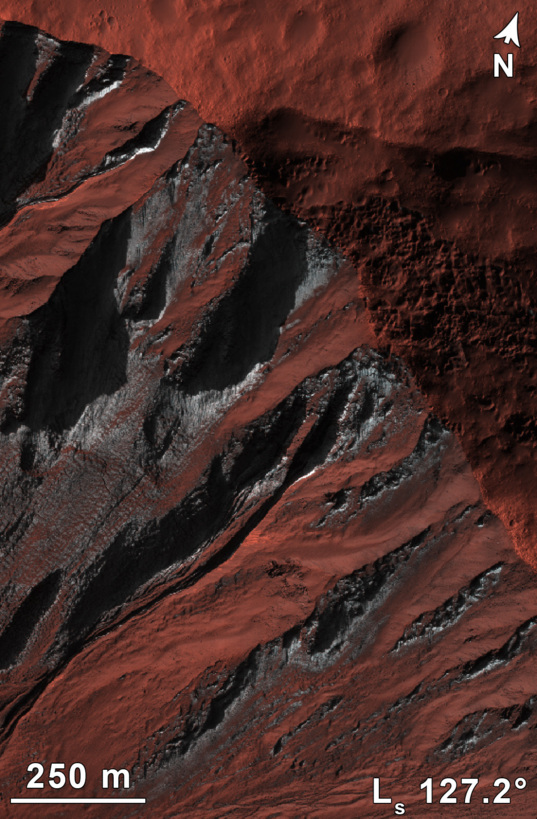 This HiRISE RGB colour view shows frost within gully alcoves in the southern mid-latitudes of Mars in winter. Notice how the slopes outside of the gully alcoves are mostly frost-free.

Tying this all back to the CRISM spectral study I mentioned at the beginning of this post, Nuñez and his colleagues found that most of the gullies in their study were "spectrally indistinct" from their surroundings. On Mars, this is actually a common problem: It doesn't take much dust cover to make everything look spectrally like dust. In places where CRISM detected not-dusty minerals, they found that the spectral signature of the gullies matched the source material upslope. This would also be expected: Stuff that falls down a slope has to come from somewhere upslope. CRISM didn't detect anything like hydrated salts, silica, sulfates, or carbonates—minerals that form from the evaporation of water and/or the interaction of water with rock. If gullies formed from debris flows, as their morphology suggests, there wouldn't need to be much water involved in the process. On Earth, debris flows can consist of as little as ~15% water by volume, while the rest of the flow is comprised of sediment. In a hyperarid climate like that on Mars, a sudden influx of even a small amount of water could be enough to trigger debris flow activity. With such small amounts of water required for debris flows, we might not expect to see any abundant mineralogical evidence of water. The CRISM study results, as its authors point out in their paper, do not preclude gully formation by water. The results suggest there was not a lot of water involved, which is consistent with what we would expect from the morphology of the gullies.

The take-home point from all of this is that gullies on Mars are a complex system, likely evolving through multiple mechanisms over time. Not all gullies on the planet necessarily formed the same way—they don't on Earth—but certain observations like the latitudinal restriction and the orientation shift with latitude suggest some overarching control on how they formed.

It's important to note that this discussion only applies to alcove-channel-apron gullies—other mass movement processes observed on Mars, such as recurring slope lineae (RSL) or slope streaks, are morphologically distinct and thus potentially formed differently. NASA/JPL created this nifty chart to show how all the different types of mass movements observed on Mars thus far differ from one another: 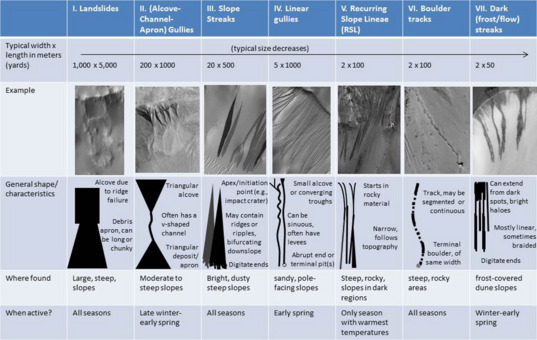 As on Earth, many processes can move material down slopes on Mars. This chart compares seven different types of features observed on Mars that appear to result from material flowing or sliding or rolling down slopes. More information >>

I would like to see some experiments conducted back here on Earth in simulated Martian environments in a small scale to see which of these gully-forming theories is the correct one.